I fly quite frequently due to relocating from Bristol to Glasgow.  In the past I've also defended Ryanair as people complain about card fees, baggage costs and toilet charges.  I stood by them saying that despite all these fees, 10 years ago you still couldn't get from A to B for the kind of fares that they potentially offer.  They even cancelled a flight 20 minutes before departure at 22:00 in Barcelona and had to fly back the next day to Newcastle instead of Prestwick wasting a day off work.  I then had to take them to a small claims court in Dublin (7 at the time) after they initially refused to pay my 250 costs but was still happy to use them.

However, my last flight to Ibiza resulted in my wife's suitcase getting lost when we had a wedding to go to 2 days later.  The case arrived in Ibiza the following day after going off on a trip of it's own to Dublin, but they refused to send it on to us at our accommodation in Ibiza saying we had to collect it in person ourselves when it arrived at the island at a cost of 60 in two taxis!

On our return to the UK I submitted a claim for this money and Ryanair refused pay us a penny.  Instead they hid behind the Montreal Convention - Article 31.  This is a document that I've never even heard of let alone brought on holiday as my poolside reading!  Apparently, as I hadn't complained in writing within 21 days (7 days if you include the 14 days we spent in Ibiza), they are not liable and don't have to reimburse us for these additional expenses. 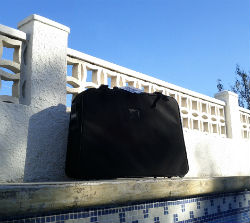 I'll boycott Ryanair from now on...

In my next letter to them I pointed out that it says quite clearly on their own website that they will forward the baggage on.  However, apparently it was my choice to spend our holiday travelling the island to retrieve our luggage and spending 60 in taxis rather than by the pool, so again they hid behind Article 31.

Now if they think this is a reasonable customer service and an appropriate way to treat their passengers they're wrong.  In fact I feel so let down that I will join the list of non-flyers, I'll boycott Ryanair from now on.

If this is how they keep their costs down, then as far as I'm concerned it will always be more cost effective in the long run to pay bit extra and fly with an airline that actually gives a damn about it's customers!

There was something in the papers about this the other day, must admit I have never flown with Ryanair and I never will after reading the pig-boss's attitude.
Truth be told I am amazed that so many people fall for the crap, 'cheap flights' yeah they just charge you for breathing whilst on board and using the lav! Better off paying the supplement with the likes of Virgin and being able to relax. Well worth the money!
11/09/12 frequent fly'er
7

As a rule, I will avoid Ryanair if at all possible. Their customer service is terrible. Their attitude just stinks in every possible way. I always prefer to travel happy and pay a bit more (and usually is only just a little bit) than travel unhappy and stressed.
10/05/12 MikeRay
2

As far as I can tell, the gripe is not about Ryanair losing the luggage as such (any frequent flyer knows that can happen with any airline) but rather that they did not deliver it when found.
11/01/12 Stuart
8

The LCCs only offer point to point service, with no interlining of baggage, thus substantially reducing the chances of loss or misrouting.

LCCs are not always cheaper than legacy carriers, particularly if you factor in the value (if applicable) of baggage, seat selection, meals, and so on. More importantly than that though, is the value of knowing that in the event of a delay or cancellation, they will either have a back up aircraft, or you can be re-routed onto another carrier, something the LCCs are unable to do.

Finally, the legacy carriers tend to treat customers with some respect, something that Ryanair don't seem to have any concept of.
11/01/12 MikeP
-3

No problem McFly, like I said the only people who have 'lost' my luggage have been the national ie expensive carriers, eg BA etc who always use the same excuse that they don't actually handle the bags so not their problem, the fact that they take off knowing that bags haven't been put on board doesn't bother them. I can assure you that happens plenty if waiting for bags will delay a flight. Having never lost a bag on a cheap flight I'm not sure how they handle it but it certainly can't be worse than national carriers who couldn't care less, although I had one bag returned to me after it being lost for 5 months so I shouldn't really complain that they kept looking for so long.
11/01/12 artuk
4

Apolgises Artuk, my fault for thinking that getting your luggage was a privilage.
04/01/12 McFly
1

Agreed McFly but my bag goes with me, if I had checked in baggage it would have cost me £40, and £40 if my wife also checked in a bag, then another £80 for check in on the way back. If I wanted to check bags in then I wouldn't have flown Ryanair, it would have been the expensive option. I did fly on a Tuesday at 8am and returned the following week on Thursday at 17:30.
BUT, I have flown with many International carriers and had bags 'lost' in truth delayed for a few days by British Airways, South African Airways and Iberia, Iberia have lost my bags every time I used them!!!!
I always look at the full cost to me, once I was taking a 'cheap' flight with Easyjet to Brussels but adding up the cost of transport and parking to Luton, and Bus fare to Brussels from the airport in Belguim, it only cost £10 more to fly BA from Heathrow at a sociable time with food and drink included.
Overall, I have saved so much money uisng low cost airlines that if something went wrong I will still be ahead. All I am saying is it is the customers choice and it does annoy me that people want cheap but all the priveleges of expensive.
27/12/11 artuk
8

Artuk, I've always agreed with you but no doubt for your 4p flight you were there from Tuesday 6am till Thursday but if your bag went elsewhere and you has to spend your Wednesday wasting time and paying for a taxi to retrieve it then paying the £60 yourself for the privilege you might not see the 4p flight being such a good deal.

I get very annoyed at people who want to fly at bargain prices but then want to be treated as first class passengers. My wife and I were charged a 'booking' fee of £20 for a Ryanair flight to Belfast. HOWEVER, the TOTAL cost of the flight, return tickets for 2 people was £20.04p. I have no problem paying £20.04p for 2 return tickets from Bristol to Ireland, the nearest equivalent flight with Easy Jet was £90 and with BMI was £180. Will people STOP expecting first class service at rock bottom prices. If you don't like discount airlines don't use them.
23/12/11 artuk
4

"We didn't like Rynair's attitude before we flew with them"
But you flew with them regardless, playing into Michael O'Leary's hands, because they were cheap. Thus you became the victim of your own meanness.

We didn't like Rynair's attitude before we flew with them and after the one and only horrible 'cattle market' experience with them in an uncomfortable plane we, too, have decided that airlines are one form of transport we will no longer use unless absolutely necessary. What really annoyed us with our Rynair journey, strangely enough on the way back our cases weighed over the baggage allowance coming back - and we hadn't bought anything to bring back with us! Don't they use the same scale measurement at every airport? We think not!
23/12/11 Gillybow
-3

The OP says, "it will always be more cost effective in the long run to pay bit extra and fly with an airline that actually gives a damn about it's customers!"

Please, if ANYONE knows of ANY airline that "actually gives a damn" about its passengers, let the rest of us know which one. There are horror tales like this about every airline I've ever heard of.
23/12/11 charmbrights
-1

You get what you pay for in life. This airline does not care about passengers it only wants to fleece them as much as possible legally or otherwise. You have helped keep them in business by using them.
23/12/11 Fedup
0