On a recent holiday to Greece, our flight home was delayed for 14 hours.  Yes that's right, a delay of 14 hours!  The tour operator was unable to provide any useful information but said not to stray too far away as they felt sure we would be boarding soon.  So, I went outside to work on my tan.  A couple of hours - not a problem.  Except there was no sign of boarding...

After a few hours, we got the obligatory sandwich and glass of tepid water.  Then there was another 6 hours before we were supplied with a cold hot dog and a cup of coffee.  I love Greece but the attraction of their airports does tend to wane after you've been sitting in one for a while.

When the plane finally took off (14 hours later), we were charged for the coffee on board and the pretty much inedible food.  We also had to wait for some luggage to be taken off the plane as a group of passengers had given up and got themselves a local hotel without telling anyone.  Understandable after 14 hours but it meant an extra 45 minute wait for the rest of us!! 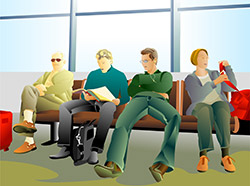 We arrived back to Luton airport at 1.30 in the morning.  Naturally as is the case in England, all forms of public transport had ceased by this time and I was faced with the choice of spending £70 on a grotty room in an airport hotel that looked like a 1960s crematorium, or spending £60 on a taxi to get home - tough choice!  In the end, some very kind friends came for me in their car, which promptly broke down on the motorway.  All in all my return trip from Greece was a total fiasco.

The tour operator refuses to reimburse me in any way and replies to all my letter in a patronising and formulaic style.  It's a well known company and I've used them many times in the past.  Obviously, customer loyalty means very little to them.  After spending quite a lot of money on this holiday, I felt I needed another one by the time I got home.

If only the company would admit that they totally screwed up, I would feel a lot better.

Sorry to point out the obvious but isn't this why we take out travel insurance? Also after so long aren't the airline supposed to offer you a transfer to a different flight if you wish and to put you up in a hotel until that flight as ready all at the airline's expense?
22/11/10 Chris80
-9

What really gets on my jordans is when you are in a cafe/canteen or whatever and you order a meal containing both chips and beans, and the person serving goes and pours the beans over the chips! I like my chips crispy, not all soggy!
26/08/09 grumppyoldwoman
-2

If only it had been, may have been cheaper. I paid far too much for this holiday. It's a famour company starting with the letters TH.
26/08/09 NIckyB
1

Minimum Standards; you are so wrong!

You got one bit right, we do live in a village and I must admit we are both a bit overweight, but not much by today's standards!

We run a sucessful business between us and could probably be described as middle class; you have obviously mistaken us for the fat, sweaty, drunken tracksuit wearing masses who clog up the airports these days. You have missed (or ignored) the bit where I said we dress smartly in the evenings! (The grumpyoldman doesn't like football and has never owned a football shirt!)

You also seem be under the impression that there is never any food served at airports and therefore any food smells. We sit with one of those little tables between us and eat our delicious cheese scented pizza without disturbing others. The same cannot be said for the aforementioned masses whose obnoxious kids run around screaming while their parents soak up more alcohol to prepare themselves for the flight home.
29/03/09 grumpyoldwoman
-5

People who eat takeaway pizza in a public place at the airport are disgusting! Their manners are frightful. They are not thinking others' sensitivities at all. Their cheap meal stinks to high heaven.

As a middle-aged couple both in the medieval peasantry sense as well as age, I expect you are both fat bumpkins, village idiots. As for getting mistaken for Spanish I expect you wear one of those silly hats on holiday with "Viva Espana". on it. Por favor stay away from the airport and eat your pizza outside in the cold with the smokers.
29/03/09 Minimum Standards
1

Minimum Standards; are you addressing me? Your manners are disgusting!

Are you one of those people who get taken for a ride at the airport by paying about five quid for a small slice of pizza after queueing for half an hour while staring enviously at me and the grumpyoldman enjoying our lovely large pizza which cost about the same as your one measly slice?

(By the way; we are the middle aged couple who often get mistaken for being French, Spanish or Italian when abroad as we don't wear football shirts & always dress smartly in the evenings.)
27/03/09 grumpyoldwoman
-9

You stinky old bag. You should be banned from travelling you peasant. Why don't you camp inside the terminal building, and set up a camp fire?
27/03/09 Minimum Standards Are Essentia
6

anon, there is a way around this problem which we always use.

During the holiday we size up the places that do takeaway pizzas: then a few hours before the coach is due we order one (with cheese & veg only, no meat to go off) & then just take it to the airport & eat it there.

I have recently came back from a holiday in Portugal which was booked with Thompsons. The holiday was fantastic but the return flight was delayed by an hour. We departed our hotel before breakfast was served and found the prices in Faro airport ridiculous so decided to wait till we got on board to purchase something to eat (by this time we had not had anything to eat for about 18 hours. When we got on board the plane the air stewardess advised us that she had no snack boxes and only had 20 sandwiches for 140 people. She then proceeded to sell 5 or 6 sandwiches to one family and so by the time she had moved the trolley down four rows she had sold out. Why do Thompsons not stock adequate amounts for the numbers on their flights (the stewardess advised that she always has this problem) and why did the air hostess sell a quarter of the sandwiches to one family instead of politely asking if they could share so there would be more to go round. Thumbs down for Thompsonfly
27/03/09 anon
-17

Once I had to travel back from Greece from a rather remote airport on a plane which had to leave at 5:30am. No opportunity to stay the night in town in a comfortable hotel. One had to travel to the airport on the last bus at 10 pm the night before. The airport had zero facilities to accommodate one. It did not have any seats or all night cafés or anything whatsoever. All one could do was sit on one's suitcase.

It was then my troubles began. The moment I sat down on my suitcase, no sooner than I had done that, that then a rather burly Greek security policeman with a loaded and pointed machine gun ordered me to stand up. Yes ordered me. I refused. He pointed his weapon at me yelling "Stand Up". After 2 minutes of argument I was arrested. Taken to the police station and interviewed as a criminal. At least I got a seat. But I was refused a smoke. I nearly missed my plane because of all this.
31/01/09 Hate Greek Airports
-4

Small is the mind which does not understand complete freedom of speech. MikeP is the cockroach of this chatshop, a scavenger for sympathy for his feeble point of view. His comments are always self-righteous. He adds little of real value or joy to the lives of others. He is not funny at all. He is a bore. He is not even controversial. He has no understanding of the classic art of rhetoric or 18th century art of debate. He is not enlightened at all. Go to the tradesman's entrance you little horror.
27/01/09 Nolens Volens
-14

Thanks, Mike, for seeing off that rather sad individual. Whatever next - insults in Inuit, swearwords in Swahili?

You proved my point, Nolens Volens. Thank you.

You are a classic case of vasa vacua sunt bene sonantia.

IHG wouldn't honour reward points for purchases at the hotel