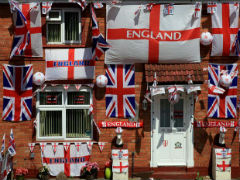 Basketball game, but no money for a worthy cause
I do respect that these troubled times are difficult, and once in a while it's nice for those in financial distress to seek an outlet like a game of - [20 June 2011 - 3 comments]

Zorbing experience day gift left us deflated
For those who don't know, Zorbing is classed as an adrenaline or thrill sport, perhaps not in the same league as Sky Diving or Microlight flying but - [20 October 2010 - 9 comments]

Camping in the UK often expensive and filthy
The summer is here and a lucky few are heading off to foreign beaches for a couple of weeks, whilst the rest of us who aren't so affluent will have to - [28 July 2009 - 11 comments]

Football, the players, managers and fans
This gripe is probably going to annoy a lot of people but it's got to be done! Football (especially in England) really gets on my nerves and because - [30 May 2008 - 38 comments]

Verbal abuse shouted at football players
In light of the recent news headlines I feel the situation has gone too far. It has reached the stage where so called 'football fans' can get away - [23 January 2008 - 26 comments]

Dress code in Adelaide bars and clubs
Here's my gripe about dress codes in bars and nightclubs. In the city where I live (Adelaide), I am restricted to just three bars where I can go out - [4 July 2007 - 8 comments]

Fed up with the World Cup on TV and in the news
So its World Cup time again is it, who would have guessed? We’ve had the phenomenon of the England flags flying from cars for quite a while now, but - [5 June 2006 - 103 comments]