Has anyone used Globespan Airlines?  I have recently used their so called "Award Winning" service to travel to Canada and was less than happy with several aspects of their service.

First of all, the flight was delayed by two and a half hours due to the co-pilot's security pass being out of date.  How ridiculous is that?  We were even called to the departure gate before this fact was announced over the tannoy.  Secondly the food, for which an 8 levy is charged was almost inedible in my opinion.  If Jamie can produce school dinners for 39p, why can't Globespan produce a reasonable meal for more than 25 times that amount?

The final straw was the poor choice of in-flight entertainment.  The only movie we had for an eight hour trans-Atlantic flight was Mrs Doubfire!  This movie was made in 1993.  How cheap and out of date must a movie be for Globespan to show it on a flight?  Maybe they picked it up from a bargain bucket of some retailer at the departure lounge before we left? 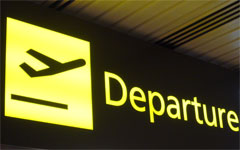 However, the real cause for my rant is the impossible situation regarding registering my complaints with Globespan.  Their website is as far as I can see completely unhelpful and freely admits that they will not respond to feedback!  By sheer volume of e-mails sent and threatening to write to newspapers, they finally conceded to send me a reply, with promises to review my complaints.  However, all subsequent e-mails sent by myself have been ignored.

I have twwo questions:
1) How on earth did they win an award?
2) Who on earth deemed them worthy of an award?

If I'd the decision had been mine they definately wouldn't have received one that's for sure!  I'd love to hear from anyone with a similar experience with Globespan and advice on how I can raise the profile of my complaints.

You see this is why I always take my own entertainment on flights and only have the meal if it's thrown in free (very rare these days). Usually find for a long flight if I have a good meal before I leave for the airport then have one when I get to where I'm going I'll be just fine.
22/11/10 Chris80
4

Hello MIKE P!! I hope you enjoy your holidays and Im sure you will never ever ever have another delay AGAIN!..now that BIG BAD GLOBESPAN has gone!!!!!!.. I have flown as Cabin Crew for ten years the happiest being with Globespan.....delays happen... to everyone!!

It is sad for Globespan staff for sure - no-one wants to loose their job ! and I for one miss the airline flying from Edinburgh to Alicante and they were busy flights ! What choice now............. Ryanair ryanair ryanair !!!!! That's it over winter months (no choice at all) easyjet don't fly in winter, start up in Spring, once a week then twice a week in summer. Come on airlines and Edinburgh - a better service than this pleeeease !!
12/03/10 Elp
-24

Not any more they aren't. They are no longer operating, and the airline industry is better off without these cowboys.
07/01/10 MikeP
6

I agree with you we go a phone call 1 week before we where due to fly out. Saying that our flight time back into glasgow from palma has been changed from 1:00pm to 3:00am not just that the woman on the phone was every rude.I have a child at 6 he would be knackered with we took that flight.But our only other options was take 2 days off our holiday or fly into edinburgh.So we took the edinburgh option with no transport to get back to glasgow.But when we where going out we got a delay of 2 hours because fuel cap broke.FLY GLONESPAN ARE CRAP!!!!!!!!!!!!!!!!!!!!
07/01/10 RYDO
-10

I am sorry for those of you who who placed your confidence in this third rate airline, and I'm even sorrier for the employees who at this difficult time are now without jobs, but Globespan is now under administration.
16/12/09 MikeP
-2

Think of the staff at this point, that they are possibly going to loose their jobs. You had a 2.5 hour delay (just so you know, that isn't a long time - I was over 5 and a half with BA and didn't see the need to gripe about it) and the food wasn't all that great (shocker - airline food wasn't 5*?). The staff who work for flyglobespan wont be able to pay their mortgages or bills, and Xmas is less than 2 weeks away. get your priorities in check, please.
16/12/09 bm
-11

Globespan is not primarily a 'budget' airline. It is a full service charter operator, and also operates some scheduled services. However inexpensive the fares might be, there are certain minimum standards which should be met, and Globespan consistently fails in this regard, particular in respect of reliability and customer service.

The 'gripe' is not just about delays, there is a malaise throughout the airline. However I suspect it is on its last legs, and the industry will be no poorer for its demise. I do have sympathy though for the poor sods who will lose their jobs,and for the people whose holiday plans will be wrecked.
15/12/09 MikeP
36

Did you get there safely and at a good price? Yes, welcome to the world of budget airlines. I have flown many times with Globespan and it's value for money. If you're delayed then that is annoying but I can't think of an airline that isn't subject to delays or impacted by lost baggage. If the reason for the delay is as you have explained then I'm surprised at their honesty. I have flown with the main airlines and it's usually a "technical" problem with the plane Budget airlines won't have the same back-up when things go wrong but that's what you sign-up for when you go for the discounted deal.
15/12/09 Scunner
-8

"Scotland's largest airline, Flyglobespan, has denied it is on the brink of collapse."

From today's news. If this is airline is on the brink of collapse, I am sorry for staff who will lose their jobs and passengers whose arrangements will be ruined, but the industry will be better off without these cowboys.
14/12/09 MikeP
-9

Poor you. It must be awful exist in you little world where so much importance is put on such trivia.
14/12/09 got a life
-16

Having flown 7 times in 2 years with Globespan from Belfast to Orlando Sanford, only once have both legs of the journey been on time, with delays ranging from 2 to 9 hours. I have had numerous departure time changes, I have paid for pre booked seats which have been changed to cramped "ordinary seats" due to the change of aircraft with no chance of a refund. I find their aircraft appear grubby and worn and my confidence isn't enhanced when I find the instructions for the emergency doors etc. to be in what I believe to be Icelandic!!!! I have found Globespan staff to be rude and condescending on the phone when I eventually got an answer.
I have finally given up allowing Globespan the benefit of the doubt and find it much more efficient to either travel Aer Lingus ex Dublin or BA ex Gatwick with similar costs.
So my advice to anyone thinking of using Globespan is to think again and seriously check out the alternatives if you don't want to encounter delays, ruined holidays and frayed tempers
05/11/09 Never again
4

Yes I have flown with Globespan twice and will NEVER do so again. Both flights were massivly delayed due to unkown reasons and my letter of complaint never got a response. AVOID THIS AIRLINE AT ALL COSTS THATS FREE ADVICE. If I were you I would pay the extra £200 and go with virgin\BA etc they are a real holiday spoiler.
25/09/09 P
-5

It Just goes on and on and on from PikeM, drivel, self important boasting and endless trivial nonsense.
14/09/09 Mr Hicks
-9

IHG wouldn't honour reward points for purchases at the hotel