I very recently travelled on a flight to the USA with my mother who is in her 70s.  She has not been very well and needed some warmth and sunshine.

Unfortunately, the airline carrier was Virgin Atlantic, a fact that I initially was quite pleased with as it has a great reputation for customer service.  Oh!  How wrong I was!

Upon arrival at Heathrow, we were met with the disappointment that the flight would be delayed by one and a half hours.  Disappointing yes, but this is not the real concern of this gripe.  After all, we spent the time in the airport doing some people watching, stretching our legs, buying some drinks and the time soon went by.  The sheer horror of this flight began whilst on board.

Many of you have probably experienced some tarmac delay - the feeling of being trapped on the plane as you sit and wait. Well, we sat and waited, and waited, and waited some more.  The captain's voice - we had to strain to hear him - came through the speakers now and again, mumbling some apologies, eventually explaining that there was a problem with the fuel being loaded.  We waited some more, becoming more and more uncomfortable, the noise around us rising, children - quite understandably - beginning to cry.

Eventually, the plane made its move toward the take-off spot, raising our expectations that, at last, take-off was imminent.  Alas, our hopes were dashed.  The plane began to move - back to the terminal.  Now the problem was we were told, something about the weight of the luggage.  So, again we waited, and waited, and carried on waiting!  Trapped inside a metal prison; a coffin on the tarmac.

All in all, it was around 4 hours and 40 minutes before take-off... 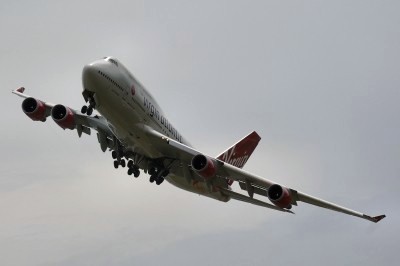 All in all, it was around 4 hours and 40 minutes before take-off, followed by a flight of approximately 11 hours.  We arrived in the USA shattered, my mother developed a chesty cough almost immediately after arriving, no doubt picked up on-board the plane.

We complained to Virgin Atlantic Customer service, pointing out that Virgin has an agreement with USA authorities that tarmac time must not exceed 4 hours maximum (but on the UK side - Heathrow - there is no such agreement and customers be damned!).  The response?  The offer of the cost of a coffee and a biscuit incurred during the one and half hour delay at Heathrow - not even the source of my complaint.  Further approaches to Virgin Customer Service are met with silence.

Virgin Atlantic - a hell flight resulting in the offer of a cup of coffee and a biscuit!

Sadly now it looks as if my calculations could be correct. The latest news suggests the aircraft did indeed head South and is located west of Perth. New satellite data and wreckage have been identified.

What will happen now is ships fitted with side scan sonar’s such as HMS ECHO will search the area to locate the aircraft and its flight recorders.

My assumptions are not proven just the fact that it went south.

BTW I work for the company that own’s Inmarsat and using our data made the calculations.

I now believe the story I told earlier and only recovery of the flight records will show what happened.

A sad day for all concerned and my heart goes out to them.

Of the many, mostly ridiculous, theories about The MH320 disappearance, yours
is the only one that makes sense.
Not necessarily correct, but credible.
23/03/14 furricat
0

I joined the mile high club when my partner Big Lionel caught me bending over on the plane trying to retrieve my Vaseline from my flight bag, i must say though i did enjoy it alough the family opposite with 2 young children were giving us funny looks for the rest of the flight.
22/03/14 Fred E
0

It just shows what a dodgy country it is. They say that boarding a plane in Malaysia is as easy as boarding a bus. lol
21/03/14 Dave
0

Which is approximately where the search has moved to now.

This works on the premise that the aircraft was sighted at 2am passing over Penang Island. Course was South (approx 183) and she was travelling around 400 MPH.

Some 1hour 19 minutes after take off. She would have had a further 6 hours and 30 minutes of fuel, although climbing, turning and altering speed will use fuel which cannot be known at this time.

Therefore she probably flew on a course of 183 for a further 6 hours 11 minutes until she glided into the sea close to 8.11 am.

The latter part of the satellite arc falls through this area, although the aircraft still had 30 minutes fuel by calculation, the likelihood is it fell to sea shortly after 8:11 (within 1 minute) as the signal faded at that time.
21/03/14 Phil
0

I have been watching events concerning MH320 the missing Malaysian airliner closely for the last 2 weeks, and believe I may understand what has happened.

What surprises me is nobody so far has postulated what may have happened with the evidence known.

This 7 hours was recorded as an omni directional transmission from the aircraft and detected by a satellite. And because only a single satellite received the transmission the location could not be defined.

Here is what I think has happened.

Shortly after take off a serious problem occurred, most probably an electrical fire. This fire spread in the maintenance area but wasn't detected by the aircrafts sensors, possibly because it was contained within cabling.

Slowly and progressively it started to burn through cables connecting systems including communications and was finally detected by the pilots.

Releasing they had no comms, they did what is trained, and made a left turn to return to their closest airport with good safety capabilities, e.g. Kuala Lumpur airport.

They attempted to extinguish the fire but to no avail and this possibly included a climb to 45,000 feet to ensure no air supply could reach the systems on fire.

They made a box turn to the left and headed South aiming to reach a track that would bring them South of the runway so they could make a safe return approach.

If you check the take off direction for the day it was North, so aircrafts will land into wind from the South and the left hand box turn is standard training for all pilots.

With the aircraft in autopilot and without comms and navigation they were finally overcome by fumes.

The aircraft continued flying (now South) until it ran out of fuel.

Therefore the aircraft is in the Southern Oceans along the curved line seen by the satellite.

As a foot note the aircraft at 35,000 feet will drop 1 foot per 15 feet travelled and therefore will be around 100 miles South of its maximum fuel range.

What do others think? This makes more sense than aliens stealing the plane
21/03/14 Phil.
0

My mother still speaks with dismay of the horror of her Virgin Atlantic flight experience - such was the pain that the memory is still vivid!

My anger at the failure of Virgin Customer Service to react seriously and reasonably; or to show any meaningful concern at the sheer horror they put us through is unabated.

Please think twice before booking a flight with Virgin! If something goes wrong, they simply do not give a damn!
21/01/14 miserablemoaninggit
-1

Tell your travel agent if he doesn`t do anything about his aeroplanes,you will report him to your local ombudsman with a view of getting an order taken out on him....... It worked for me.
If a plane for more than 15 minutes, it can be classed as a problem.
21/01/14 jo jo
0

I remember flying on a long haul flight with Virgin Atlantic and there was a problem with the ventilation - it was freezing! I was sat right under an air nozzle and even though I turned it off, there was an awful draught. I put on my jacket and wrapped a scarf round my head but couldn't sleep. Not wanting to stay awake for the whole 10 hours, I asked if I could move. No, was the reply. A bit later on, I asked again, as I had spotted some empty seats. I tried to move and was told to go back to my assigned seat. Finally, after FIVE requests, I was 'allowed' to move and got some sleep.

What annoyed me the most though, was that there was a seriously obese man who they put in a row of his own!! Maybe that's the secret, eat so much that you take up two seats!!
26/06/13 frequent flyer
3

No joy with compensation. Same old crap from an over-bloated, arrogant company. Are there any airline companies that actually give a damn about their customers? Who have pride in the service they provide? Who react with dismay when they fail - like Virgin failed on this occasion - and want to do something about it? Something more than just a cosmetic "I'm sorry"?
24/06/13 miserablemoaninggit
-3

Well, I've just booked a holiday back to the USA and I specifically requested NOT to fly with Virgin Atlantic. A miserly, penny-pinching outfit that treats those travelling in economy class appallingly, allowing them to sit cramped up for 4 hours and 40 minutes before a long-haul flight, with no offer of compensation!

No doubt they fussed over the fat bankers sitting in Business and First Class, supplying them with more bubbly or hard spirits, whilst patting down their pillows and making repeated apologies. They probably also gave them a future flight by way of compensation.

But, for the mere ordinary folk in economy class, many of whom probably work hard and do good, making a real, worthwhile contribution to society, Virgin Atlantic does not give a damn!
08/06/13 miserablemoaninggit
-6