Having just endured a sleepless night to ensure prompt arrival at an airport for a very early flight, I was allocated a seat on a flight in front of the toilets.

The joy of not being able to 'recline' my seat was torture.  Sitting bolt upright for several hours on a flight is no pleasure.  Why do airlines have seats here?  Not only are you subjected to the pong of the toilet, you also have to put up with people queuing next to you whilst trying to sleep, eat or read etc.

What is your opinion on this?

Then to top it all, the person in front of me reclined their seat so that the head rest was 20cm away from my face.  The person in front then had the audacity to call the steward to complain that my legs were pressing on their seat.  Where am I supposed to put my legs, around my neck?  Needless to say, the steward explained to the Australian female, that I could not recline my seat, due to having the toilet directly behind me.  I explained to the steward that if she moved her seat up a few centimetres, problem solved.

One push too many from the person in front... 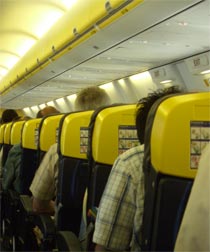 Anyway, she refused.  So for the next 4 hours I put up with her pushing her seat into my knees every 5 seconds, where I pushed back to allow the blood to flow in my legs.  On the point of exploding, I had to contain my frustration to the point of doing nothing in case a situation arose.  Alas, it did.  One push too many from the person in front really pushed me over the top.  I sprung up and said 'please could you put your chair up as it is crushing my legs'.  With a sarcastic reply from her, that was it.  Talking normally on a hushed aeroplane seems louder than it really is so when I retorted with calling her a child, stewards came running up to me shouting 'sit down sit down', as if I was a terrorist.

... trying to make a point on an aeroplane gets you no where unless you want the risk of getting arrested

What's up with everyone, trying to make a point on an aeroplane gets you no where unless you want the risk of getting arrested when you land.  When all I was trying to do was to sit comfortably without developing a blood clot.  As I can't afford first class, sitting in these cattle cart seats is all I can do and I was not being unreasonable.

Next time, I'll just shake the hell out of the headrest of the incredibly inconsiderate person in front and take the risk of getting arrested.  We all pay the same price roughly for these seats so why shouldn't I make a complaint?  Make a complaint to the airline...don't bother, they just want your money and don't care.  Presumably the seats and seating space for individuals is getting smaller so they can extract more profit per flight.

Mark - I think you're just making too many assumptions here, m8. A lot depends on the passenger in front and how far they choose to recline their seat. Personally, I think 4" should be the maximum. I'm not overweight in the least but have had to endure a long flight with the man in front (and yes, it is usually men that recline the most) almost on top of me. I couldn't even get out to use the loo and had the call the flight attendant to ask the guy to put his seat up. When I came back from the loo, he moved it back and there was no way I could actually get into my seat as the arm rests are fixed. I ended up virtually having to climb onto the arm rest and accidentally knocked him on the head while doing so... Tough!
01/06/14 Frequent traveller
0

Oh yeah mate it's probably not that the seats are getting smaller but that you are getting bigger! You are probably too fat m8. If you were 25 stone or something why blame the seat being too small? However you are always welcome to upgrade to first class where you can stretch your fat legs. Are we not all sick and tired of sitting next to some 25 stone guy? Overweight people should be banned from buying an economy class ticket in the first place!
05/06/13 Mark
-7

BLISS - I flew Thomas Cook and asked for my PS2. Imagine my disappointment when they did not wheel a Playstation 2, monitor, Dual Shock controller and some DVD based games for me to play.

They gave me a PSP - originally described as the Playstation portable.

Before booking have a look at the carrier's seat allowances - Seat Guru is pretty good. Different airlines have different seat widths and depths. Emirates is very generous - Airtours and Ryanair (and other low-cost airlines) have appalling seat allowances.

I won't go with any airline which treats its passengers so badly - and I can usually get a good deal if I shop around.
31/10/10 ajp
0

I work for an airline and I can tell you that its hell when the equipment goes wrong. People just get up on their high horses making demands and threatening to sue. I think in the grand sceem of things its not a big deel if you miss a movie. We usually have magazines on board and newspapers.
27/10/10 flychick
-8

I am only 5.1" and yet my legs were crushed and I sat in a narrow chair between 3 other people in the middle isle of a Cattle Truck Flight!!!

It is ironic that they show the health videos for DVT and yet there was no room to move. I was so close to the other people and the chair in front was pushed right back and squashing me even more!!!!

I am so glad someone has finally made a worthy complaint.

It is a health hazard to sit, squashed in one place with hardly room to move - especially on a long journey. The more they squeeze in , the more money they can make at our expense and our health.
27/10/10 I hate cattle truck airlines
-13

"If I don't get a window seat next time, I'll probably get a bit annoyed."

When you pay for an airline seat, you get the seat to sit on, the space under the seat in front of you and the range of recline the seat can go through. On a flight over four hours, this space in economy class is woefully poor in terms of comfort irrespective of the airline. Given the confines are already to small, the last thing you want is some oversized human with shallow pockets sitting beside you trying to reduce your space even further. If you are tall, you should pay for a business class seat. Or the airlines should offer a few rows with better legroom. Or you should seek out a swap with someone behind who does not recline (a small child for example). In this respect the tall are just as much a nuisance as the fat who encroach from the sides.
14/09/10 anti-kimbo
1

True airlines don't give a damn about you as a customer they just want your money. See all the SCAMS they have for excess baggage and anything else they can dream up.Thomas Cook now offer you a PS2 for just £7.00 in place of a free inflight movies. Con men, and SCAMMERS the whole collection of them. What with no being able to bring your own water or juices on board, because they may contain Hydrogen Peroxide for bomb making, down to 14 Euros yes 14 Euros per Kilo excess baggage from Tenerife to UK on Fly Thompson.

I think the whole thing should be investigated and the scammers fined for bad practice, even better revoke their licences. The customer is KIng and will remain so for as long as I fly anyway.
14/09/10 BLISS
0

In short, they make you less able to rest but provide entertainment for your waking hours.
14/08/10 Right brother
-6

The best place to sit on a cramped plane is on the end of the wing flaps.There you will find plenty of room & fresh air far away from other effing annoying passengers.Problem solved.
13/08/10 Orville Wright
-16

If I fly I always try to book a door seat. Twice on the usual spain flights I've had to sit in the shape of an N leaning ----> this way slightly.

Having been the tallest person on the flights I've been on thus far, I've been amazed that 3 foot tall gnomes have had the seats with leg room. Looking back and grinning because their feet can't touch the floor and they got into the seat booking ahead of me.

When It comes to seats with leg room, I think they should be given to the tallest people on the flights. Not bought with extra cash.

I'm a stewardess and this arrogant guy was sitting on the end of a row of seats, by the aisle. I asked him to put his bag under his seat, before take off. He did, but as soon as my back was tuned, he pulled it out again. This went on for a few minutes, until I finally told him that I had clearance to take his bag if he kept disobeying me. He wouldn't put his bag under his seat. He said "I don't want to, I'm not going to, and it's not my problem if it's unsafe" if you can believe that! The head of the Cabin Crew finally got involved, and he got in such a strop, he was eventually evicted from the plane, holding our up our take off for an hour.

I've only flown once, and I sympathise - I remember being extremely surprised by how closely cramped the seats are. However I soon forgot about it when I saw the breathtaking view out of the window. If I don't get a window seat next time, I'll probably get a bit annoyed.
16/02/09 Infrequent Flyer
-11

I have never recieved anything when waiting for a bus thats late so accept the coffee because we dont have to give you anything. we do it because we care not because our company says so. then we put up with all the sly remarks from passengers because they are late and so forth. we are late as well, we all have familys, pets, buses to miss etc. have a bit of respect please its not hard, plus while I am here, cabin crew are not aloud by law to pick up bags, this is because a passenger took an overweight bag on the flight and forced a girl to put it up for him, she broke her back and is now wheelchair bound, we are not being rude if we say no. lastly if your bag s lost its because of the baggage handlers employed by the airport, so complain to them. the airline itself cant lose a bag because there are no holes in the plane for them to fall out of lol hope that cleared a few things up.
11/01/09 MIKEY
2