You know the feeling, you've made it to the station, paid for the exorbitantly-priced ticket (should have bought it 12 weeks earlier online) and struggled onto the train.  But... have you ever wondered where on earth you can put your luggage?  The overhead luggage racks are shallow and inadequate (not unlike certain politicians), the area between the seats is now taken up by waste bins and the areas at the end of the carriages are hopelessly small.

Anyone who's had the misfortune to miss their stop because their tiny case was at the bottom of a pile of huge, heavy ones will know what I mean.  Struggling to move eight or more cases while being bashed by other passengers getting on and off when the train is about to pull away is not my idea of fun.  Neither is getting trapped in those automatic doors which open and close incessantly, or negotiating the 2 foot drop between the train and platform.... but I digress. 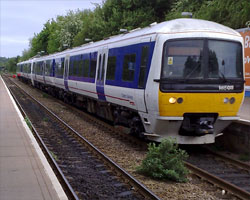 I do realise that the train operators want to maximise their already colossal profits so I can understand that they would prefer passengers just to bring a small clutch bag.  Do they think that we should send our luggage to its final destination by courier?  Maybe they they just haven't considered that actual design of the train interiors could be faulty.  Moving the waste bins would be a start - you could get a suitcase in the space between the seat backs of 2 lots of four facing seats (if you follow me).

Adding the appropriate number of carriages would also be helpful.  You know what it's like when there's a crowd of people waiting on the platform and there's a sigh of relief when the train pulls in - only to be replaced with a gasp of disbelief when you realise there are only going to be two carriages for a 300 mile journey.

What do the rest of you think?

We all have something to moan about when it comes to BR and be fair we are mostly right.Trains running through where I live are usually 2 car,and packed!,so it came as a great relief when they started using 3 car sets,of course the problem with this was that MORE people started using them.This obviously came as rather a shock to the operating company,could it be that people actually want to use Trains,? well they do! but anyway we are now back to over crowded trains,but the operating company (arriva) says that they cannot put on extra coaches because the Platforms are not long enough to take the extra coach(es).
This I find to be surprising being as before these new trains came on we used to have 6 car DMUs.Finally has anyone else noticed that the old trains had their seats fitted so that each and every passenger could see out of the window,nowadays if you lucky enough to get a seat its often one with limited if any view,designers of trains please take note!!!!.
11/06/10 arrawn
-2

Well...I'd say give yourself more time to collect your bag before arriving at your stop. But I do agree with you about short trains. Even long trains can be hopeless. I recently had to travel from Cardiff to London and back. Ticket price was £187 (it was arranged through work so I couldn't get a discounted ticket). That's bad enough but I couldn't get a seat on the return journey, until past Reading. £187 to sit on the floor by the door.
24/05/10 dobbo996
-23

Remember, not so many years ago when the people controlled the doors, (with those funny things... what were they called?, oh yes, handles!). You also has a guard's van in which all bulky items could be placed. A label with the destination attached to a case would often see it offloaded for you at you destination too.

Try using a train to or from Cambridge and see the number of push bikes that you get to share the carriage with! and as they will only go in the doorway, I shudder to think what would happen in an emergency.
26/04/10 Ding dong
-4

NPT, but you have commented and a highly inane comment it is, too.
18/04/10 Support Public Transport
18

Lost count of the number of times I had my coffee knocked out of my hand in the morning because of some idiot carelessly swinging their brief case onto the overhead luggage racks. The space between seats would have been better.
18/04/10 AOD
3

This stowage space problem will be solved but it will cost someone's wellbeing, followed by a costly lawsuit, after which more baggage space will be provided at a price a la Ryanair.

Meanwhile, just try not to be the one who trips and loses a body part because of it. The money will sort it out in the end.
18/04/10 Andy Carrie
8

The other day I was travelling on an inter-city train when I tripped over a bag stuck on the floor next to the overfilled luggage rack. After getting up I turned round complaining that some idiot had left their bag in the aisle instead of on the rack. How dare they. those stupid idiots who do that, how selfish. The person next to me said that was his bag. He looked at me like the peasant most people are in this country, threatenly so, and immensely rudely, saying it was his right to stick his baggage there if there was no room. A punch up was about to ensue, when we pulled up into the destination station. ...
18/04/10 Bags Cause Punch Ups
-8