I was a police cadet in the time that the cadet's got a wage of around 500 per annum.  It was a pittance in terms of pay and we were the lowest of the low.  After two years in the police force I graduated as a probationary Police Constable doubling my pay overnight.

At around this time bobbies were leaving the police force in droves, but then Edmund Davies bumped up the wage and we finally got the kind of salary that we where worth - what a pity they let the agreement slip!

Unfortunately technology hadn't caught up with us and we worked points.  The men who drove cars all had radios, whilst those of us on the beat stood by phone boxes (these were called points) on the hour and for ten minutes there after.  I met my wife on a point so it wasn't all that bad!

If they had a job for you they rang, if not you moved on to the next kiosk.  If you were unlucky enough to get a sticky job in between then you were on your own and would often have a few bruises to prove it! 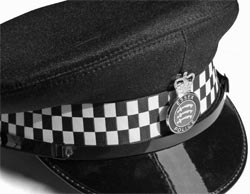 When was the last time you saw a bobby on the beat?

We worked a seven shift night's week, followed by two rest days (and slept half way through the first one of them) followed by what was called an "I/C" week.  For the uninitiated that's 7 days of incoming paper work, of summonses, warrants, foreign force enquiries etc.

This was a great way to get to know who lived on your patch.  No radio, no body armour, no CS, no baton, no stun gun, only a short piece of hickory (known as a truncheon) and your whit's to defend you.  But the public respected us because we had earned their respect and could be called on at any time to step in as a police officer.  Everyone knew where the line was and what would happen if it was crossed it.

Today the police commute in, do a job and then commute out!  When was the last time you saw a bobby on the beat and do you know his or her name?

Police and thieves in the street. Frighten the nation with their guns and ammunition.
11/06/14 collar
0

LOL IL SEE THAT BIG MOUTH PRI!K IN SPAIN WILL SOON BE BACK IN THE UK !

About time I see them dirty bent coppers in their sports cars ? On their salary ?
10/06/14 Bulldog
0

Corrupt police in the Flying Squad were suspected of plotting to kidnap the partner of a cash van driver to obtain a £50,000 ransom, secret intelligence reports obtained by the BBC reveal.

Lol
I have a mate based close to one of their training centres , he sees bmws , mercs , range rover sports & bentleys coming out of their car park & I wonder how they purchase such exotic cars on their wages ? It's called taxation of criminals !
We all know these bacon bits are a bunch of crooks in uniform & abuse of power runs all the way to the top !
10/03/14 The bulldog
0

I daresay they hide in their flash motors nowadays, furthermore I agree and consider these people to be self proclaimed perfects but, they aren't nickin' anyone. They are driving about with their heads in space with twisted thoughts of nothingness.

This is what they are, bad-heads. The average thief that stole a handbag could've been sentenced to pick up litter for 6 weeks which is far less of a deterrent to the felon than time in the slammer, or a suspended sentence.
08/03/14 collar
0

A former detective facing investigation over alleged corruption in the Stephen Lawrence inquiry has boasted ‘They’ll never lay a finger on me’, it was claimed yesterday.

John Davidson has run the Smugglers restaurant in the Spanish holiday island of Minorca for 15 years since taking early retirement from the Metropolitan Police.

Like I always say how the fcuk does a bacon bit end up in Spain ? Rotten corrupt bacon rashers !

A former Gwent PC whose arrest of a pensioner was videoed and shown on the internet has been awarded at least £430,000 damages after winning a case for constructive dismissal.
What a joke !
These criminals also get paid for their malicious behaviour .
06/02/14 Bulldog
7

Transient means that serious crime is not usually commited by locals. The norm these days is for a crew from one part of the country travelling to another part and committing a series of crimes in a short period before returning home. This is evidenced by home office statistics. The nature of these crimes is not normally offences against persons (i.e. murder, assualt, r*pe etc.) they are usually still more likely to be commited by a person known to the victim. These transient crimes are normally offences against property (i.e. theft, burglary etc. ) and they make up the biggest percentage of crime in the UK today.

Crimes of this nature are more transient today than they were decades ago due to it being much easier to move around the country quickly. More cars means more car ownership and more access to independent movement.

those who want a return to the old ways of bobbies on the beat are living in a world of blind romanticism. The criminals will not return to their old methods so why should the police?

Freddie says "Most crime committed these days is of a transient nature".

In what way is crime these days more "transient" than crime of a few decades ago? Shoplifting, mugging, breaking and entering, car theft, domestic violence, abuse of children, murder, brawling in the street - not much new there.
03/10/11 Murchison
26

On the beat ! Nah let's go grab some drug dealer of fraudsters , I'm sure he will have some cash in his house or car . And we all know what happens next he gets taxed by the boys in blue!
That's why there not on the beat !
30/03/11 Tell them
4

Freddie, you are allowing your blue slip to show, I could always smell a copper. I cannot smell this lazy deodorised version of today. I do not watch police drama & do not suffer from blind ignorance. Get real man criticisms of the police are a true in the main. In reality they deserted the beat years ago it was just denied. The public are always watching you Freddie, Intelligence to the police is sit on you’re snide back-side & wait for the grass's to blow up their neighbours, then turn a blind eye to the grass’s indiscretions.
11/03/11 Cynical Boblet
-17

Bobbies on the beat are no longer an effective use of limited resources.

This is a thing of the past and people need to get used to that idea. As with everything else in life crime has evolved. Most crime committed these days is of a transient nature and the only way to combat that is by intelligence based policing. Unfortunately this means that the police need to be elsewhere. The problem with the British public is that they expect the police to be superheroes. Only on 'The Bill' and other such programmes are they like that.

I foften feel very sad about the public's perception of the police. It is born out of a combination of tv drama and blind ignorance.
11/03/11 Freddie
-2

I know its not much of a gripe, but at 2-00am I looked through the bedroom window and saw a Police car flashing by at between 90-105 miles per hour. I accept maybe he had an urgent 999 call - but is any urgent call worth the risk he poses to others. I live on a busy dual carriageway, in an built up area, 600 houses line this road, and in my 10 years here he was the fastest speedster I've seen. At this time 2.00am we have city-night clubs emptying and each night the house is rocked by speeding cars, they appear to suck the air out of our house and the noise is ............? In the 10 years mentioned we have had 2 road deaths.
10/03/11 P Williams, Moor Town, Yks.
-12

Tough on the police .they are wasters in uniform on a power trip !!!!
The help people write up statements for the courts - make it more tangible & guess what when the chap turns up to give his evidence he can't cause his statement is not in his own words !!
The CPS another bunch of prats just wasting court time on cases with no evidence!!!
Plain Hearsay !!!
05/03/11 The jedi
-6