I am always infuriated by people who complain that "the police aren't doing anything" about some petty crime they have suffered.  As a policewoman and blogger, I read a great deal of online comment on this matter, some of which you can find me moaning about at pcbloggs.  The biggest gripe seems to be either that we take ages to complete an investigation or that we come to a conclusion they don't like.

As far as the police "not doing anything" goes, this is usually the cry of the victim who expects me to drop everything and become their own personal bobby.  They do not bother to check when I am on duty before claiming that I do not return their calls, they feel "betrayed" if I have any time off or am ill, and they are constantly outraged that I have been too busy to take their statement or pick up their CCTV.  Yet on the three days out of every twenty that I am actually working during a weekday between 6-8pm (the only time they will agree to be seen), I either make an unexpected arrest or I turn up and they are not in.  This means a delay of a further three weeks which is out of my control. 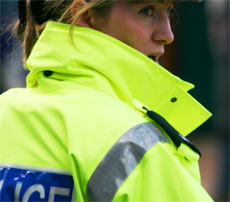 As for coming to a conclusion they don't like, just look at the press furore over Donna Appleyard, the woman who got an Â£80 ticket for swearing at kids.  Had the situation been the other way around, the kid would have sold the story that a woman terrified him in the street and no action was taken.  I have been given a tirade of abuse by a father who objected to the fact that my investigation proved that the fight in question was started by his son.  I have had complaints made that I have dropped charges against people for criminal damage when the only evidence was, "He must have done it".  People expect the police to conjure up foolproof evidence (the fool in question being the Magistrate) in cases where none exists.

On top of all of this, we are expected to walk all day along roads in shiny yellow jackets so the public can see us, for which we have received fifteen weeks' legal training.

Next time you are wondering why I didn't turn up to your burglary in time, I was walking along a road three miles away "Preventing Crime", just like you wanted.

Five police officers accused of gross misconduct after 'changing their stories over death of suspect during drug search'
The officers will face gross misconduct charges but not criminal charges
Mr Ullah, 39, died after police forced him to the ground in High Wycombe
Officers alleged that he had drugs in his mouth before he collapsed
An inquest into his death was abandoned in 2011 after discrepancies emerged in police statements
The IPCC confirms that police officers could be sacked !!!!!

SICK AND TIRED OF THESE PIGS , MORE ACTION TO BE TAKEN AGAINST THESE CRIMINALS AND OPEN THE PRISION DOOR TO A CAT !
09/08/14 Bulldog
0

LOL IL SEE THAT BIG MOUTH PRI!K IN SPAIN WILL SOON BE BACK IN THE UK !

About time I see them dirty bent coppers in their sports cars ? On their salary ?
10/06/14 Bulldog
0

Corrupt police in the Flying Squad were suspected of plotting to kidnap the partner of a cash van driver to obtain a £50,000 ransom, secret intelligence reports obtained by the BBC reveal.

Brit cops on pick tv ,, what a joke , more like Brit cops on the take .
We never see the images of the police getting wrong ohhhh noo that would not be good tv !
Rotten apples
14/03/14 The rot
0

In a so-called civillised country it is disgusting that hard-working, decent souls are kept awake by gun-shot sounds. Everyone has got to have a decent night's sleep, it is one of our constitutional rights here. I was just thinking about someone earlier's gun-shots that awoke me (yet again) the police are not to be trusted and I wish I had chance of a good kip tonight. They are not proper gangsters, they are totally false, and just like to deviate good-heads' shuteye.
09/03/14 collar
0

In the part of London I live at the night is alive the sound of gunfire, 'till say 3 or 4 in the morning. The po lice sometimes display a physical presence, but it is not considered to be that important. Decent members of society cannot sleep anymore. The police therefore put more pressure on the baddies and not crime detection. A high percentage of motoring offences are known to be commited by habitual drivers and therefore local police deal with them. Sad but unfortunately true.
08/03/14 collar
0

I regularly watch police camera action and similar shows. Although I generally support the police I cannot help noticing that in these shows the police seem to invest a lot of time and energy into arresting people for having small amounts of cannabis.

The reason why ? Because big crimes are bought & paid for !

A former detective facing investigation over alleged corruption in the Stephen Lawrence inquiry has boasted ‘They’ll never lay a finger on me’, it was claimed yesterday.

John Davidson has run the Smugglers restaurant in the Spanish holiday island of Minorca for 15 years since taking early retirement from the Metropolitan Police.

Like I always say how the fcuk does a bacon bit end up in Spain ? Rotten corrupt bacon rashers !

Stephen Lawrence - justice has to be served on the dirty bacon bits !
Corrupt to the core & rotten apple who get paid to lie .
07/03/14 Bulldog
0

A former Gwent PC whose arrest of a pensioner was videoed and shown on the internet has been awarded at least £430,000 damages after winning a case for constructive dismissal.
What a joke !
These criminals also get paid for their malicious behaviour .
06/02/14 Bulldog
5

Being in the police force is just another job in today's Britain. It is no longer a skilled or privileged position.
16/10/13 ICX
3

I regularly watch police camera action and similar shows. Although I generally support the police I cannot help noticing that in these shows the police seem to invest a lot of time and energy into arresting people for having small amounts of cannabis.
03/09/13 Taxpayer
-2