I read in the news today that 3,000 crimes were committed in England and Wales last year by children.  As these kids were all under ten and therefore below the age of criminal responsibility, the little thugs cannot be held accountable and basically get off with a warning; the crime is recorded by the police however (yeah, big deal!).

What I find even more worrying is the fact that the well known charity The Children's Society would quite happily see age of criminal responsibility raised to fourteen!  Well, are they blind or something?  Do they somehow think that such a bold move would suddenly reduce the amount crime committed by youngsters, or 'teenagers' as would then be the case.

I'm sure some of the figures would show a drop in crime, but in the long run it would be a slap on the wrists (or not), and then back out on the streets to vandalise someones car or terrorise some old biddy.

In Scotland the age of criminal responsibility is eight, although parents would deal with all but the most serious crimes until the age of sixteen, however the law can (and will) punish little hooligans if need be. 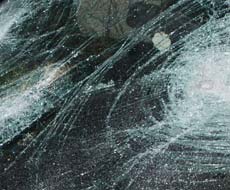 The parents should be held accountable

Personally I wouldn't want to see the current age of criminal responsibility reduced any further in England, but I think that it certainly should not be raised to fourteen.  Furthermore, I think up until the age of ten the parents should be held accountable as if they committed the crime themselves and if anything, the penalty should be more severe.

I believe the behaviour of these children is a direct result of their upbringing.  Of course this might all be a symptom of the way society is changing.  After all, parents aren't exactly encouraged to discipline their kids any more and school teachers are equally impotent when it comes to correcting the behaviour of unruly pupils.  Perhaps that is another gripe though.

Increasing the age of criminal responsibility....Most certainly not. By the time I was 7 or 8 years of age I knew what was right or wrong.....parental guidance & discipline comes to mind. Though I have to admit I did get into a few minor scrapes...and was disciplined for it. From an early age our four children was guided and taught what was right and wrong and disciplined when they did wrong. Unfortunately for the last 20 years or so parents have increasingly become less concerned and virtually abdicated responsibility for their child's bad behaviour or misdeeds. Far too many modern day parents are not fit for purpose. I am a firm believer that if a child breaks the law, and that child is living with their parents at the time, then those parents should be hauled before the courts and fined for their negligence in raising that child. Then, and only then will things change for the better. Lest we forget...There are still many wonderful caring children in this broken down world of ours.
04/08/11 Old Fogey
-1

Some good comments on here. The lady who's child age 5 was assaulted - Sorry I disagree with your comments. The little boy age 9 was simply being a little boy, he meant no harm it was called and still is "Playing Doctors and Nurses". You need to realise humans are animals just like dogs, cats and horses, he was getting sexually frisky and the the top and bottom of it is INSTINCT kicked in. You need to learn that laws cannot interfere too much with natural learning, curiousness and healthy male/female instincts. If you go over the top you might damage your own childs future and thinking patterns, let it pass, ignore it. Good point made by the poster who mentioned how children have taken on manly roles in the past, you know it might have been good education for these children to be treat as men and women, it must have done them some good, esp if it was combined with reading and education. Alas 18th / 19th century Britain was an poor place for children to thrive.
17/03/11 Cheerful Robert
-18

Children certainly know right from wrong from the age of 8 or 9 and therefore the age of responsibility should not be increased. These 'do gooders' live in cloud cuckoo land.
19/08/10 Concerned parent
-16

I think the age of criminal responsibility should be reduced. My case is is that I have a 5 yr old daughter who was sexually assulted by a 9 yr old boy, he knew right from wrong and actually admitted he knew it was wrong, although was quick enough to deny the claims when police questioned him.That to me suggests he knew the difference. What disgusts me is all this boy has had to suffer is a quick chat with the police and social services alerted, where is the justice in that, all because he is 9 yrs old. This boy is allowed to attend the same school as my children and is free to do it again to another little girl. Therefore it is my family who are having to move and start again whilst the lad in question gets off scot free.
02/08/10 emmie82
-10

parents and environmental factors should be taken into account when children offend. Look at Mary Bell, what a witch hunt of an eleven year old child. Regardless of what she did she was too young to be accountable.
also why were such small children wandering around unsupervised. her victims were 3 and 4 yrs old. there was obvious child neglect going on.

Parenting skills in the sixties obviously weren't looked at.

i grew up in this era and us little kids were left to our own devices, and very often used to make money, which was thin on the ground
20/07/10 blonde15
-37

Go back a hundred years and you'll find ten year old kids joining the RN as midshipmen powdermonkeys or loblolly boys or the Army as drummer boys,nowadays we think they are little angels that can do no wrong=Bring back the old days (give them a few chimneys to sweep).
11/06/10 arrawn
-8

I think that a minor should be charged as an adult for how bad the criem is. not just give them a warnoing. this is not going to stop them from doing it agin!
27/04/10 shelly jelly belly
-1

Scum with nowhere to hide

An eight year old caught smoking behind the bike sheds at school is nothing but a criminal, and well above the age of consent. And getting caught tossing the butt away constitutes littering, another crime, with an £80 penalty.

Lock up all our kids, they are criminals the moment they are born.
20/03/10 Scum with nowhere to hide
-9

The minimum age of criminal responsibility should be abolished completely. Everyone, regardless of their age, should be subject to the same laws and be tried and punished in the same way for the same crimes. If they are old enough to commit the crime, they are old enough to feel the full force of the law. This is nothing to do with their parents, it is to do with the individual who commits the crime.
20/03/10 Daniel
-16

No but the norm seems to be the blaming societies social problems on our children!!
17/08/09 Rose tinted child lover....App
-11

I see the hippys with their rose coloured glasses are back on the site again. Wake up and smell what's burning for goodness sake! You might live in a town surrounded by beautiful little darlings but I can assure you that this scenario isn't the norm!
17/08/09 Angel Cake
-10

Distressed reader of such horr

There are a lot of child haters on this site!!! Wake up and realise all this labelling of our children as evil monsters is only creating what you all are trying to make out you want to stop!!! You label a child as bad and they will begin to believe that that's what they are and live up to your foolish labelling!!!!!A lot of your comments are ridiculous and frustrating to the core; uneducated on the psychological, emotional and cognitive development of children; yet you all seem to think you know what's best for our country and our future rulers...our children. I feel sorry for such ignorant hatred filled individuals that are so full of anger that they take pleasure in writing so terribly about our children. I for one have more faith in our children and I definately experience pleasure and happiness from the children from my community. I am proud of the children I know but maybe because they are surrounded by positivity rather than negativity they are lovely; pleasant; helpfull individuals that will grow up to be beautiful adults.
17/08/09 Distressed reader of such horr
-8

I dont believe that the parents should always be help responsible, in some cases yes, in others no. from the moment we are able to move, we develop our own choices, the choice to lift your left hand, the choice to walk in to the kitchen the choice to do what you want. if a child crys in a supermarket, its not always the parents fault. if a child beats up another child how is this the parents fault??? the child had choice, they didnt have to beat them up, I dont think the parent to ld them to.
there should be appropriate punishments for the appropriate age, I dont believe that we should live in fear of some thing (the cane), but there should be a punishment that will make you not want to do, what ever it was you did. and prison is simply the easy option, for the offender that is. whats wrong with a light slap on the legs for doing something wrong, it happened to me, and I certantly didnt do what ever I did again.
24/07/09 kiyroi
-4

Kids throwing snowballs at buses and passers by