If there's one thing that really irritates me, it's the policemen and women in area patrol cars that think they are above the law.  This seems to be the case all too frequently these days.  Practically every week without fail, I see them pulling out of side roads into the path of some unfortunate and occasionally even in front of my car.  No blue flashing lights and no apology!

I watched this happen to a middle aged man who proceeded wave his displeasure at the offending police car.  Subsequently, the police car allowed him in front and flashed him to pull over. He was given a producer, despite having his license and insurance documentation in hand.  They vigorously checked every detail of his car for faults and when his nearside fog light (in the bumper) didnt work (on a bright sunny day!), they informed him that he was in a dangerous car was required to have it fixed immediately.  He complained at the station, but was given a lot of useless drivel - I know this, because it was my father!  As it happens Im a mechanic so informed the police officers that the defective light wasnt a major problem and it would be fixed, at which point I was told to mind my own business and get back into the car before I was arrested for some law that Id never heard of before! 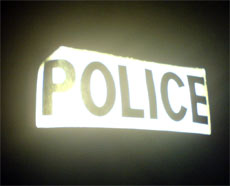 Recently I was driving along a winding road and met a police area car traveling on my side of the road at speed.  It was on blind corner of a right-hand bend and he forced me to take evasive action by swerving into a lane. This resulted in me hitting the curb and the impact caused the wishbone on my car to snap rendering it unmovable.  The police had slowed to crawl and after being told that I was in the wrong, they cautioned me for dangerous driving.  My passenger who was witness to the whole thing agreed with me completely and yet her evidence to the case was discredited because she was wearing sunglasses!

One or two of my friends have had accidents with police cars and been blamed for them too despite being innocent.  My point is that I cant stand being penalized by people with a god like attitude, causing accidents and getting away with it because of the uniform.  It's just not on!

Excellent piece, I have fallen foul of a similar thing, a Police car hit me when they cut in front of me to turn left a few yards ahead (I slowed down, it was not safe for me to stop) ; their report to insurance was that it was my fault for changing lanes.

As it was a Police car on a call out I would have been happy to accept that it was 50/50 (as I was driving on the same road and they are Police), but was not happy to be blamed for driving unsafely and causing the accident.
09/04/14 Disappointed
0

A couple of days ago i was forced off the road by a police officer driving far to fast for the conditions. I had to mount the curb at 30mph to avoid a head on that i feel would have killed me, in doing so i've damaged my car. So far I've been fobbed off with crap about highly skilled drivers and they refuse to take any furthur action.

I asked them to review the footage and then tell me it wasn't dangerous driving by the officer, I've now been told that there was no camera in the car. The police officer was on her own and I have basicly been told that they accept her version of events and I haven't even had so much as a sorry. To add yet more insult I was told that if I had hit someone on the pavement I would be facing a dangerous driving charge and possibly a causing death by...

Come on!! FFS I had to stick my car on the curb to save myself serious injury at the very least, and surely goes without saying that i wouldn't have if there was sommeone there. You have no idea how bloody furious I am. I'm not going to let this drop and my car now has to go off to the garage.

Hmmmmmm..The police shoot people all time , john charles ? And we all know that was a cover up !
More officers to serve time & roll out the body cameras !
10/05/13 tre
-2

I think it's more a case of lack of time on Kenny's part than unwillingness to delete comments. He just had to spend a lot of time getting rid of jobby's meanderings, hundreds of them!

I feel that the crime of "hate speech" is rather nebulous. I could say that I really hate police officers who fall over while on duty and then sue the person who called them out, and that they should be sacked. Would that be a crime? Or, if it's only a hate crime if it calls for someone to be killed, how about if I said that I am of the opinion that Mick Philpott should be hanged?

When will somebody decide that hurling insults at other posters is a "hate crime"?

Looks like it's pointless using the report button when nobody cares or is listening. Just goes to show how the standards of decency in people have diminished recently. Iam blessed with the fact that I have lived in an age when self respect, and caring for others was placed high on our list. I feel sorry that so many people now feel the need to display so much hate for one another.
11/04/13 Jethro
0

It's still hate speech and illegal.

If someone posted something that could be construed as 'racist' you can be pretty sure it would be deleted PDQ. Hate speech against the police seems to be acceptable.
11/04/13 Friday Lunchtime
-5

FL, I really don't think anyone who sees this comment is going to feel encouraged by it to go out and start taking pot-shots at the police. It's not that credible, especially as whoever sees it can also see how many of us find it offensive.
11/04/13 grumpyoldwoman
3

That's fine and correct as far as it goes, but you are sidestepping this :
ALL PIGS SHOULD BE SHOT WELL DONE MR MOAT
which is, as I've said, advocating and praising the shooting of a member of the police service.
11/04/13 Friday Lunchtime
-5

Ok, here's my point of view.

Firstly, I find mr t's comment deeply offensive; as I've said elsewhere I was a lifelong Conservative voter until recently.

However I believe in freedom of speech; trying to curtail it is a slippery slope best not embarked on. People will always take offence at something someone else has said and even the mildest of criticism or disagreement may end up with someone being reported to the police for causing offence. Indeed this sort of thing already happens.

I think the police have better things to do than chase people for saying something offensive, and really, what harm has mr t done? He hasn't harmed you or me; he has only harmed himself by showing us what an offensive person he is, in our opinion. We are all free to disagree with him and mark his comment down.

As Evelyn Beatrice Hall said "I disapprove of what you say, but I will defend to the death your right to say it".

Freedom of speech is one of the purposes of this site and I would hate to see that curtailed.
11/04/13 grumpyoldwoman
0

I did so. May I suggest that others do the same.

If Kenny chooses to look into it, I believe he will find that such statements as that posted by "mr t - 10-Apr-13 13:58" constitute hate speech under the UK legal definition as contained in the Criminal Justice and Public Order Act.

Friday Lunchtime; I don't want to get into the rights & wrongs of this, but did you try hitting the little orange triangle with "Report" next to it under the offensive comment?
11/04/13 grumpyoldwoman
0

I am disgusted at you. The absolute least you could do is delete that vile piece of hate speech, but you seem to think it's appropriate to leave on the site the rantings of someone advocating and praising the shooting of a member of the police service.

As for stating that someone is glad that MT is dead, that's merely distasteful and sickening, but an opinion that the individual is, I suppose, entitled to express. I understand you are Scots so you no doubt have your own dislike of MT. I can accept that people may have rejoiced when she left office, but to rejoice when an 87 year old woman who has been off the political scene for 20 years is depraved.

You have double standards since you state that you 'should' delete it because of excessive use of capitals, giving you a reason to delete it, but you've chosen not to do so, which implies your tacit approval of the comment.

You are ultimately responsible for what is published on your site. Your registration details are in the public domain. On that basis, if you are happy to leave that comment on the site, you may wish to question whether you are bold or foolish enough to accept the consequences should someone report this to the Northumbria police or to the late PC David Rathband's family or legal representatives.
11/04/13 Friday Lunchtime
-6

Sorry. Don't give out IP Addresses any more unless requested with a court order and a good reason, and I certainly don't moderate without good reason - although in this case I should because of the excessive use of capitals... one of the old site rules.

It's borderline, but no less offensive than some of the stuff posted on FB TWIT recently, and my analysis has found that so far they're not 'trolling' and spamming the site or posting up copyrighted text. He gets that one for free... for now.
11/04/13 Kenny (site admin)
2

People need to be accountable for what they say publicly and this type of speech is unacceptable.
10/04/13 Friday Lunchtime
-6

Why do I have to do everyone's job for them?