I write this gripe with steam coming out of my ears.  The courts in this country are an absolute joke and it appears to me that whatever crime the low life commit the punishment never fits.  There is always some excuse put forward, "he had a bad upbringing", "he only did it to fund his habit" or "he or she was depressed at the time!"

I recently read a very disturbing article about two males who had asked an off duty police officer for a light and when he said that he didn't have one, they assaulted him and beat him so badly that he was in a coma for several weeks.  Although he eventually woke up, this man is now in a permanent vegetative state and is unable to speak, feed himself, or basically do anything.

The offenders were traced, prosecuted and received a very fitting sentence (numerous years behind bars), however they appealed and guess what?  They had their sentence halved by a judge as in his words "He thought that the original sentence was too harsh!"  This police officer is now dependant on everyone around him for day to day care so how could the sentence be too harsh? 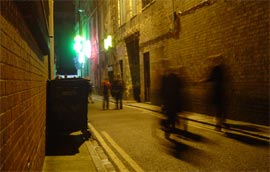 Another case was of a man who was beaten by two crazed men just because he was making a telephone call in the place where they wanted to take illegal substances.  For his "crime" he received a broken eye socket, broken jaw and a fractured skull.  Yet again they were put before the courts, but this time they were let off and given a supervision order because of the broken homes they came from and the fact that they needed help.

So from all this can we assume that the judicial system cares more for the offenders than it does the people affected by crime.  I'm sure that if that person was a member of the judge's or magistrate's family then the sentence would be greatly increased.  Why do I feel so strongly about this?  I am a serving police officer and am so angry about the way the system treats people on the receiving end of crime.  So much police time and effort is put into bringing the criminal to justice, just to watch them walk away laughing.

It's not just the EU judges, it's the UK judges and legal system as well that think they are unanswerable and a law unto themselves. These faceless entities will do anything to rule and dictate on their own terms. It's time this system was brought to heel.
17/10 Jethro.
2

There is another article on here about age for criminal responsibility. I read an article awhile back about 2 people had killed someone for some trivel reason and got less than a year each. also life doesnt mean life anymore
22/10/14 66
0

''SICK AND TIRED OF THESE PIGS , MORE ACTION TO BE TAKEN AGAINST THESE CRIMINALS AND OPEN THE PRISION DOOR TO A CAT !''
I'm sorry I don't understand - Open the prision (sic) doors to a cat?
09/08/14 Work ethic
0

Five police officers accused of gross misconduct after 'changing their stories over death of suspect during drug search'
The officers will face gross misconduct charges but not criminal charges
Mr Ullah, 39, died after police forced him to the ground in High Wycombe
Officers alleged that he had drugs in his mouth before he collapsed
An inquest into his death was abandoned in 2011 after discrepancies emerged in police statements
The IPCC confirms that police officers could be sacked !!!!!

SICK AND TIRED OF THESE PIGS , MORE ACTION TO BE TAKEN AGAINST THESE CRIMINALS AND OPEN THE PRISION DOOR TO A CAT !

Facing jail, the TV star PCSO who conned £10,000 out of foreign tourists at Gatwick
PCSO Alexis Scott took money as passengers prepared to board at Gatwick
The 39-year-old told them they were only allowed to take £1,000 out of UK
Those who argued told they could be detained, prosecutor claims
She even held her police hat out for victims to put money in, court hears
In total she conned £10,000 from six travellers in April last year, jury told
She has been convicted of six counts of theft and abusing her position

I wonder what these guys are thinking - judges need to come down hard on the cops and their corruption !
10/04/14 Bulldog
0

Collar, judging (pardon the pun) by your entries here and the grammatical accuracy of your responses, I suppose the person you were defending went down.

That’s why you hate the police then, you keep losing cases and blaming others for your own intellectual deficiencies.
04/04/14 Nick
1

And before you say Nick, no I was not being a criminal, but part of the defence team indeedy!
03/04/14 collar
1

I don't mind people knocking judges, but now, into my head again are the bads. what they want, but one of the worst things I saw was at the Magistrate's court. Court staff had the door open and one was mumbling really explicit case notes, details of cases, privates, etc. There was rattling but I was too busy wondering about the rubbish they were speaking in their mouths, when that particular solicitor advises clients to plead guilty!
03/04/14 collar
1

A former Gwent PC whose arrest of a pensioner was videoed and shown on the internet has been awarded at least £430,000 damages after winning a case for constructive dismissal.
What a joke !
These criminals also get paid for their malicious behaviour .
And the judges - another bunch of twits
07/02/14 Bulldog
0

What about locking I corrupt police officers & bent CPS staff ?
Lets start there !
Oh and every police should wear a camera & have it reviewed by the court to insure he was acting honestly ... Lots of things go missing on raids !
18/07/13 Tre
6

No Judges are getting wiser to corrupt police officers & the CPS wasting court time !
We all know the police can't be trusted & the CPS another bunch of wasters !!!
Role out body cameras & issue the sack to any officer that over steps his post or lies !
And the CPS well we should have them put under a microscope !
Corruption to the core & the judge and jurors are aware !
18/07/13 Tre
6

That could never work. What would the jury's verdict be? Guilty, not guilty or ... well, we think he did it but we could be wrong.

If there is reasonable doubt they are supposed to find them innocent. Any hint that there was doubt would mean lawyers immediately requesting a new trial.
12/10/12 Pedestrian Pat
4