If there's one thing I really detest then it would be those baggage reclaim carousels at airports.  They attract the British traveller like flies around a heap of excrement!

For example, I have just travelled to a Greek airport and I cannot believe the lack of intelligence that the travelling tourist displays when they are placed in front of the baggage belt.

...they would rather create a ruckus when they see their suitcase at the last minute

These idiots immediately crowd out the conveyor belt a full twenty minutes before the baggage starts to come through into the terminal building.  They virtually stand on top of the damn thing so that when the carousel starts up everyone immediately jumps back a couple of feet.  This of course means that people in the crowd behind them think that they can quickly jump into that space that has just been created.  It's complete chaos I tell you! 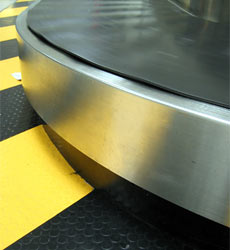 Very few of them seem to realise that if they stood back at least two feet in the first place, they would actually see their baggage trundle down the belt.  At the appropriate time they could then step forward, collect their suitcases and bags from the conveyer and leave.

But no, that sounds too much like common sense and they would rather create a ruckus when they see their suitcase at the last minute... just as it is about to pass them by.  At which point they make a grab for their bags and of course miss.  They then proceed to get dragged along with all the other suitcases into the path of the other idiots who are doing exactly the same thing.

They are just so stupid!  Why can they not be sensible and a bit more organised, because they are just creating an eternal hell for the normal traveller.  By the way, this exact same scenario happened again when I got back form Greece and arrived home at Manchester.  Thanks folks!

God the worst experience I had on one of those things was at Tunis airport where I saw a woman (i believe American or a Canadian) allowing her daughter to ride the moving conveyor belt like a running machine, jumping over the odd bag as it came along.... gah!! How stupid can people be!?
05/07/10 Thaimalayapore!!
8

Just found this post, and I cant agree more! As a worldly traveller this particularly gets to me. And brits aren't the worst either. To me Asia seemed to be pretty bad, in particular China and Philippines. Heh.. in China they were getting out of their seats on the plane and removing things from the overhead locker before the plane had even landed - all so they could be the first ones off. Go figure...
21/12/09 Philly
-9

Fully Agree with the debacle that is baggage reclaim. Why do 3 & 4 year old kids crowd the baggage carousel like its Santa's Magic Toy Ride. GET OUT OF THE WAY and let the grown adults who, travelling to or from their destinations, having paid full price for the priveledge, get their bags ! Myself, I tend to holiday out of peak time when im almost guaranteed not to be incensed by the little scrotes.

Also, how bloody difficult is it to spot your own bag ! It never ceases to amaze me how many people pick up and even get a case onto a trolley before relising its not theirs. There are hundreds of millions of people travlling this earth and billions of pieces of luggage and there are'nt massive odds of not seeing the odd 'same' looking bag but I have never once in my 20 years of travelling mistaken my bag or case.

Its simple, if you intend to travel and are blatantly incapable of identifying your luggage, stay at home...theres a good chap.
06/05/08 Tone
11

Despite it being looked at as idiocy, by you all. When I am waiting to collect my bags, I stand back unil I see my bag, when I ask people in the way to politely move so I can lay my hands on my bag and get looked at like a piece of filth with no intention of moving, I walk directly into/ through them and grab my bag, managing to slam a few people with it as I turn around. It helps that I'm 6ft 5 and have a muscle mass, greater than Mr swartzennegger.

I get sick and tired of this, they should introduce some sort of armed guard to repel the annoying little turds.

Oh and FYI people, I'm not a bully and never use my size unless doing the above or barging through groups of teens stood in shop entrances.
05/02/08 Irritated.
7

I am 60. I will no longer stand for poor services and bad value for money. I have had enough. I used to forgive, no longer. The country has gone to the dogs as far I am concerned. I have just flown back from Europe using British Airways. Never again. Together with the British Airport Authority they have jointly conspired to make my journey a misery. From long queues at Heathrow terminal 4, from monopolies and over priced duty-free shops all owned by BAA. From lack of a decent wholesome meal on the plane. From general lack of care and couldn't give a damn attitude. It's not my problem they always say. My custom will disappear I say. I just warn the young people today: if they let the world take advantage of them, they will be taken advantage of.
20/01/08 Flown Away
-12

In answer to the brainless idiots posting below.... I'm a Northerner. I do not wear sports gear, nor chavvy bling. I am not a drunk, uncouth moron. I own a beautiful, detached home, have a good income, nice car, lovely husband and a beautiful son. All at the age of 26 years old. Not bad methinks.

...in answer to your second point. What I carry in my suitcase is all the lovely money I save by living up in the 'grim north' and not paying over-inflated southern prices!!! ;-)

I would happily bet my house that my overall quality of life is better than yours.
03/01/08 Green_Eyez
-15

Worse are the people who practically p*ss their pants to get off the plane first so they can get right next to the entrance of the conveyor belt just in case someone decides to nick their cr*p matching luggage.

What annoys me is when there is a family of 5 travelling, for some inexplicable reason, all 5 of them need to stand around the luggage belt... children included. When I went to Rhodes in May, there was one particularly fat British child who insisted on feeling up all the bags that went past him, doubtless copying his dear daddy. When I travel, one member of our party stands by to get the bags, one stands on the outside of the mob to get the bags that the indentifier grabs, and ferries the bag back to where the rest of the party are standing, well away from the mayhem. Now, if everyone did this there would be a LOT less hassle for everyone!
24/11/07 Marie
-1

What annoys me is when there is a family of 5 travelling, for some inexplicable reason, all 5 of them need to stand around the luggage belt... children included. When I went to Rhodes in May, there was one particularly fat British child who insisted on feeling up all the bags that went past him, doubtless copying his dear daddy. When I travel, one member of our party stands by to get the bags, one stands on the outside of the mob to get the bags that the indentifier grabs, and ferries the bag back to where the rest of the party are standing, well away from the mayhem. Now, if everyone did this there would be a LOT less hassle for everyone!
24/11/07 Marie
-7

You want to know why people behave like morons at the airport carousel, it's actually because they behave like that all the time. Just read the cobblers below.
12/07/07 Chris
-26

On holiday, Man United and Liverpool football fans change from their day Club shirt into the same evening Club shirt and believe that they are suitably dressed!!
07/02/07 Not a Northerner
2

All I know is, They sit on THEIR brains.

People, if you fly to America don't assume that because you have booked months in advance, you will get a seat on an internal flight . United Airlines have an over-booking policy. Travelling from Denver to Rapid City we strolled up to the departure desk only to be told there were no seats. I was lucky to squeeze on the flight to meet my friends and my husband had to get a later flight. We were lucky to get our luggage at all...and the airline couldn't care less!
27/10/06 White Van Woman
3

I believe it is you without the brain. Check out your misuse of the word "they're".
I think you meant to say their instead of they are.
27/10/06 Eddie
12