I can safely say that the absolute poorest customer service I have ever received was at my local Papa Johns pizza restaurant when I went in to pick up a takeaway meal.  I had called and ordered ahead of time and when I went to the counter to pay for my pizza two staff members were fooling around and chasing each other towards the door.

The one doing the chasing decided to throw his dirty apron over the counter to where I am standing – aiming it at his colleague presumably.  Anyway, it never actually reached its intended target and hit me square in the face instead!

For this assault by an employee, I received only the briefest apology from the person who threw the apron, but absolutely nothing from the manager when I asked for him.  Besides, he was too busy on his cell phone to attend to the situation and wasn't about to apologize for anything.

This was less than satisfactory, so I acquired the district managers phone number and decided to take my complaint further. 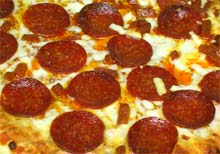 No one answered, so I left a message and got no response at all.  Eventually I went onto the web site to make my complaint.  Only then did I get a call back with a ton of apologies and no less than 10 free pizza cards.  Sure, like I am ever going to go back into a Papa Johns ever again!

It doesn't take away the embarrassment and humiliation, because at the time the rest of the members of staff at this pizza restaurant decided that my decision to complain was funny – I was not amused.  Oh by the way, I still had to pay for my pizza and I later discovered that the staff member that hit me was a shift manager - go figure.

You have got to love this kind of professional customer service!

The apron may have been contaminated by spices deployed in the pie manufacture - if these spices had entered the eye they could of made it jolly sore indeed, and it may have looked like tears were being shed - I you are a real man this would have been very embarrassing.
28/03/14 collar
0

The shock, being hit by a whole apron? How did you survive such a horrific ordeal? Perhaps in this situation you were more angered by their lack of apologies than the apron throwing, which I can understand.
28/03/14 pet
0

Not a pizza place, but I went to a fish restaurant and my 'fresh' fish fillet had a hard bit in the middle when I cut through it. It was still frozen! When I called the waiter over he said it was impossible, then stuck his finger into it to see if it really was frozen, then said he'd go and nuke it in the microwave.

This is a worldwide problem made worse by shifting values. Basically it indicates the staff have not been trained or given good behaviour tips and, one clown in the kitchen or attending the serving counter soon as imitators galore. I once complained that my tea was too weak in an Indian restaurant, the waiter went into the kitchen found the teabag used, he may have located it in a bin, he returned with it and squeezed it with his fingers pressing its remaining contents into my cup. He thought this was okay, maybe thats what they do in India, maybe thats what they do in his home, maybe Indians don't drink tea?
30/03/11 Cheerful Robert
1

You need to find that manager's boss and COMPLAIN. That pathetic manager should have been all over the place apologising to you! What a shabby run joint! If you get the owner and HE doesn't care either, then complain to a business bureau or the department that goes out and inspects restaurants for health and safety. You're a customer, and you deserve to be treated with great respect. The manager should have given that co-worker a good talking-to on the spot, and for him to just stand there like a wart on a pickle shows that he's pathetic.
05/10/10 Granny G
-4

Middle aged perso with good he

To the posters below. They are not supposed to be having fun, they are at work and are supposed to look after customers and behave responsibly.

Too many shops and take aways are now run entirely by teenagers with no older more responsible people in charge. They just treat the job as extended play time.

The employers are of course at fault as they employ younger people to save paying more money to older, more experienced workers who might bring a little professionalism to the job.

This "yoofication" of retail and catering jobs is probably the main reason why these places all play tuneless, ear splitting music - they are all half deaf from using MP3 players on high volume all their waking hours.
09/07/10 Middle aged perso with good he
-11

Middle aged perso with good he

To the posters below. They are not supposed to be having fun, they are at work and are supposed to look after customers and behave responsibly.

Too many shops and take aways are now run entirely by teenagers with no older more responsible people in charge. They just treat the job as extended play time.

The employers are of course at fault as they employ younger people to save paying more money to older, more experienced workers who might bring a little professionalism to the job.

This "yoofication" of retail and catering jobs is probably the main reason why these places all play tuneless, ear splitting music - they are all half deaf from using MP3 players on high volume all their waking hours.
09/07/10 Middle aged perso with good he
-5

J.Jordan- Lighten up, maybe they needed to have a little fun, try working in a restraunt and dealing with crappy customers like your self.
09/07/10 J,Jordan, go away
15

You poor soul. Have you suffered PTS since the violent apron attack? It's probably wise not to use those free pizza vouchers, you might get an unwanted extra topping.
26/08/09 JimJam
-17

I once saw them drop my pizza on the floor, then pick it up and give it to me in the box. I complained and they denied it, in the end they called the cops and I was forced to leave. I refused to pay ofcourse.
29/09/08 Stephen mcfly
-4

This country is a joke at the moment. Im 23, I used to work in retail and I know it can be unrewarding and boring for staff but its a job and its not like your doing hard laboring. When I was 16, I took it very seriously and rom this, it has lead me into office/sales work and now I am getting rewarded for my hard work. Kids now days see it as a joke to work in retail and feel no responsibillity and thats why they get looked over for higher paid jobs. I think that the country needs to pay better retail prices, get better people to do the jobs and force these greasy kids to act proper if they want a job!
17/09/08 Murphy Adams
-16

To the last poster, you're clearly an idiot and probably work in a pizza place. Go learn about sentences!
18/02/08 Bob
-16

you're absolutely right. pizza places should only employ the most highly trained butlers from the most luxurious hotels and gourmet restaurants. Never mind the free pizza cards they gave you as an apology, they deserve to be shot for that heinous crime
17/02/08 pizza
0

well let me see I work aa papa johns and you know what I have to say about all this. well there are way to many people complaining we work are butts off to make your butts happy and feed your fat faces. if you want to complain about our service get up of you butttt and cook something that way you can only blame yourself, yeah some people think yeah its money, but with some of us we work harder than you can see you dont know what we go through 8-10 hours a day I put up with oh you forgot my sauces, I didnt forget crap but you see what I have to put up with. or you didnt bring my coke on the delivery well did deliver your no I didnt so correct yourselves is your ganna complain
30/10/07 gggggpapajohns
1