There's one thing in particular that upsets me.  If I'm out at a pub or a restaurant and I see someone waste good food because they have over ordered.  I just think it's really disgusting, especially with so many people starving in the world.  I think the phrase; "eyes bigger than their belly" would best describe these people.  Food waste is simply inexcusable!

It's something that's been with me all my life.  As a youngster I was always expected to clear everything on my plate and the sound of a knife scraping leftovers into the bin was quite unheard off.  Kids these days it would seem are allowed to be picky with their food and I have seen so much perfectly edible food get thrown out.  Perhaps our modern junk food mentality can be apportioned some of the blame though. 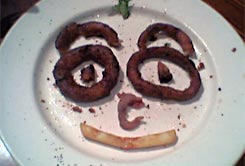 Food waste - We live in a throw away society...

Parents nowadays don’t seem to mind that their children leave food on their plate.  We live in a throw away society and the media isn’t exactly a good role model either.  I’ve seen countless TV programmes where someone will get up and walk away from a plate of food half eaten.  American lifestyle has also had a marked affect on our eating habits.  Huge portions of fatty foods and less fresh vegetables have become very common.  Should we be surprised the kids can’t finish their meal?

Some people would argue that the suppliers and manufacturers have a hand in the problem of society wasting food.  Every thing has a ‘sell by’ and ‘use by’ date.  However, I think sometimes there is a bit of a buffer built into the date and some foods will keep quite well.  As a society we’ve survived quite well without a ‘use by date’.  Is it a ploy to make us buy more food?

Poor planning and a busy lifestyle will also lead to a great deal of household food waste.  How many of us can admit to having made an impulse buy, then several days later having to dispose of food that has gone off in the fridge?

Back in the days when the saying “waste not, want not” actually meant something, you had to plan what would be bought, cooked and exactly how to use the leftovers.  Nothing was thrown out and there was time to cook.  None of the pre-packed, date-stamped unhealthy supermarket rubbish that we consume these days!

Hard times are a thing of the past and we don’t really appreciate how good things are until it’s too late.  It is particularly sad when there are so many in the world that don't have enough food to eat.

Don't waste your food, it's needed in Sheffield where a school has opened a FOODBANK to feed the starving kids!

Britain etc., could your turkey have been dry because it was overcooked? If it didn't have much flavour you could still have eaten it; it wouldn't poison you (especially as it was well done). You could have used the meat in stews & curries for instance.

Wasting food just because you've overcooked it and don't find it tasty enough is not the answer!
29/12/13 grumpyoldwoman
0

Britain green and pleasant land has been trashed

There's a plian and simple answer why so much food is wasted. We bought a turkey for Xmas from one of the more expensive supermarkets. After cooking we found it to be utterly tasteless, dry, and virutally inedible. We had to throw it away.

Nick, I do spend £100 in one go, but I only do a supermarket shop once a fortnight. £20 off is very nice, and you could always try stocking up on non-perishables to get the discount.

If I go for a bogof I make sure it's something I'm going to use. I don't throw any food away, I always use it before it goes off, or freeze it; which people don't seem to do much these days. Can't fathom why, big chest freezers are cheap and soon pay for themselves.

Dates on food are rubbish, you just need a bit of common sense. We used to manage perfectly well without them.
18/11/13 grumpyoldwoman
-4

Thank you for the lovely ideas, My son will do a class talk at his school and he choose how not to waste food, I did not know how to help him but your ideas are great. it will be a success because teaching children is easier than adults and they will take care of the world, does anyone has another idea?
01/05/12 ipo
-1

We had a great meal in the Fox & Grapes on the York to Leeds rd, the aged aunt we were with asked the waiter for a sprig of mint, which he supplied wrapped in Clingfilm. She also asked for a cheese board to go. She stuffed all items on the board including the stuffed peppers into small plastic bags that she had brought with her, again it was no problem.
16/10/11 Boblet
-3

I see no reason why customers should not take home uneaten food but I would prefer to be able to pay less for a smaller portion to start with.
16/10/11 Nonny
-6

What exactly is the problem with asking for a container to take away leftover food? It's mine, I paid for it.
09/10/11 MikeP
-9

a farmer has slaughtered a cow for meat, and grown vegetables. that farmer has done a lot of good work just to get it into the shops, and some selfish brat is crying just because there is a yummy, delicious tomato on their plate, or cabbage? sunday roast is a delicious dinner for sundays and wasting meat and the vegetables...

or, if your kid was having a small version but suddenly gets a big one at a restaurant, ask the waiter if you can take it home, so the kid can eat it at home
05/10/11 hazza
-22

I hate seeing people waste so much food! My in laws are in & they have wasted enough food this week at restaurants that they could have fed themselves for a whole week on, including meat. It makes me absolutely sick to see the amount wasted. I understand that sometimes the portions are too big at restaurants, but what is wrong with taking some leftovers home to reheat in the next day or two? Disgusting people who waste food when people all around the world are starving to death!
24/06/11 pleasedon'twastefood
-18

I may have said this before but I too have a problem with the size of restaurant portions, and hate to see food wasted.

I do have a healthy appetite but very rarely have a starter as I prefer to have my pudding! (I then have to sit there while the grumpyoldman eats his starter which he prefers to dessert but he can often manage 3 courses anyway). Even then my main course is sometimes so huge that I have to leave some to have room for dessert.

I would like to have 3 courses sometimes, if only the portions were smaller! The irony is that the restaurants are losing money on this because I would happily pay the same for smaller portions, but would be able to pay for and eat 3 courses instead of 2!

However, I loathe and abhor nouvelle cuisine, I believe it was Michael Winner who called it "a series of decorated plates".
30/01/11 grumpyoldwoman
0

This is a global problem, and I too abhor seeing food wasted.

Large portions are to some extent behind the global obesity epidemic, and this is now particularly bad in the UK, particularly amongst women many of whom are just obscenely fat, and I have no sympathy when I see them cramming doughnuts and chocolate bars, washed down by half a litre of sweet coffee or Coke, into their mouths - and then doing the same to their obsese children, perpetuating the cycle of obesity.

Marketing is partly to blame for this, there's the 'value' perception whereby many people would rather have a large plate of mediocre quality food placed in front of them, along with a pile of chips, than a properly crafted quality meal of a reasonable size, although I'm certainly not advocating the overpriced miniature portions that used to called 'nouvelle cuisine'.

We can fight back. Ask for smaller portions, share, refuse starch, and so on. There is this compulsion to finish everything that's put in front of us, specially if we're paying for it, so the simple answer is to ask for less, or go for two courses instead of three.
30/01/11 MikeP
-18

I'm sorry but I completely agree with Pandelon, it's very rare I ever finish my plate at restaurants. I simply cannot eat that amount of food. The kid's menu however say "up to 12 years". I definitely blame the restaurants for any food wastage, I remember one time I order nachos from the "appetiser" section, expecting a tiny plate, because I really wasn't that hungry, then this HUGE PILE came out, needless to say I ate 10 and couldn't eat anymore. There's no size indication at all on anything, I also think half sizes would be a good way to go, even so some of the "snack sizes" I've seen have been pretty substantial. I don't think restaurants should complain or whine, if people are leaving that amount of food, then there's something wrong in the way its being portioned!
30/01/11 catcatcat
-10

Smelly people with BO that don't shower or bathe