I'm very tired of spending my hard earned money in establishments that are less than courteous and unwilling to make amends when the give poor service or sell you a poor quality product.  I've experienced a level of poor service at many places, for example McDonald's, KFC and Rita's Italian Ice establishments.  This list is by no means complete.

This evening I had to go through it all again with Vincent's Pizza Park in Pittsburgh.  I called to order and the member of staff I spoke to was very abrupt with me and acted as though I was bothering him.  I carried on and ordered though because I really enjoyed the pizza I got from there last time.  Well this turned out to be a really bad move on my part.

When my sister and I went to pick up our order, we had the misfortune to encounter the less than courteous person I spoke to on the phone.  Again, we were treated as though we were second class citizens and were just an inconvenience.  We took the pizza home and it turned out to be one of the worse pizza's I've had in my life.  Bear in mind that Vincent's are known for their pizza, it's a very good pie renowned for being a bit on the greasy side.  A kind of an eat at your own risk type of food, but it tastes great anyway.  I knew what to expect because as I said I'd had pizza there before and never really had a problem.  In fact I've always really enjoyed the food. 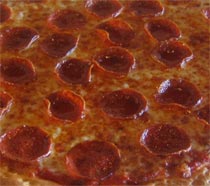 The pizza we ended up with tasted like it had been cooked, left to go cold, then re-heated before being sold.  The pepperoni was as chewy as an old boot as if it had been sitting for a while.  I called back to complain and ended up speaking to the shift supervisor.  He was basically just as abrupt and horrible as the guy who took my order.  He argued back and forth with me saying things like, "So what do you want me to do about it!"  I said, "I'm simply making you aware of the poor experience I had after buying your product."

He seemed convinced that I wasn't trying to get a free pizza when all I was doing was letting them know that I'd had a less than satisfactory one.  As if a free pizza would be the perfect band aid to cover the wound!

I'm just so sick of spending my HARD EARNED MONEY in establishments that treat you like dirt and don't even try to apologize, but they're quick to give you an excuse when they screw up.  Please, can someone tell me what happened to the notion 'Think of customer first' or customer is always right'?  Because lately I've been made to feel that I'm wrong by asking for quality and courteous service.

I used to live in Pittsburgh and have enjoyed many pizzas from this establishment. They are renowned for their size and abundance of toppings; while not cheap, are certainly worth the price. I've never had a bad experience there but I feel the poster's disappointment - a "Vinnie Pie" is usually awesome.
05/06/10 Mr. Nougato
5

Just be honest...you paid 99p for a bargain basement pizza with little or no cheese

Autumn - can you not see there was an element of self-mockery in my griper name? Are you yourself using a pseudonym, or is that your given name?

You seem to think I have a problem with pizza itself; on the contrary, I quite like pizza. I would agree the pizza recipe below bears little resemblance to fast food, and is probably both tasty and nutritious - I have not called into question the veracity of the dish itself.

But we are not talking homemade pizza here, are we? We're talking mass-produced junk made from most likely sub-standard ingredients, over-priced and served with a sneer. Is Vincent's a national chain? I do hope they are not planning a UK invasion any time soon; we have enough US 'restaurant' imports to contend with, and all of them risible. That said, customer service in the UK could still learn a lot from the US, no matter how automated or false US service may appear.

Despite the flippancy of my comment, there is an element of truth within. And so I feel bound to defend my one-liner against this torrent of invective that, quite frankly, kind of drifts away from the original post. There are many people who use Weekly Gripe to comment on such wide-reaching issues such as consumerism and globalism, and the majority of them do so without feeling the need to be offensive, presumptious and personal.
If you have an axe to grind, fine, go ahead - that's what this site is all about - but please don't make it personal by making assumptions about me. You know NOTHING whatsoever about me. On any other day you may find I totally agree with you.
30/05/08 Holier Than Thou xxx
11

It is very difficult to get a good service of any kind in this country. If you find one, please let me know.

A few months ago I went out for an Indian meal. It was dreadful, three below dire! I asked the waiter for some toothpicks, thirty or so minutes later he returned with a box of matches. Just how wide did he actually think my teeth are? What a plank.
20/05/08 Nige
-1

Holier than thou is so apt for you, isn't it? Never ordered a pizza in your life?

Oh by the way. Look at the recipe sent by 'Enjoy your pizza'. Does that sound like fast food?

It is the 'attitude' Angry Pittsburgher was mentioning. The same attitude you will face from most businesses today. Even the ones selling you internet services or insurance. You class pizza as junk. I think in todays world most all that is being sold is junk. Which people (who ar too snobbish to buy junk food) pay for and fuel the entire machinary.

If I get a bad attitude from Sky digital should I not stop my subscription? Why do I need Sky digital and their useless biased news?

Should one buy a lava lamp? Do we need a burgundy hair dye? What will we do with a fat pair of shades with D wirtten on one eged and G on the other? What good is an anti-aging cream for a 50 year old woman? How well will you feel after buying yet another set of cutlary? Are we nuts?

Next time you go shopping, look around you in the shopping center. Question the goods or services being sold there. Will you buy junk?

You will see very little point in possessing most of the items on sale. You will come home a happier person. Not penny pinching, but wiser. Someone who can not be fooled and lured.

Mix this lot into a dough flour first then add the liquid. You can mix the yeast with the water first, personally I use a bread maker on dough cycle for this bit. OK.. you've got dough.. let it rest until it doubles in size (or significantly rises) then beat it back to a ball of dough again. This dough will make one 12" and one 9" pizza. You can freeze, but for best results just make lots of pizza :-)

Very lightly flour a surface and stretch the dough out a bit. I find that getting it kind of 1cm thick and roughly round enables you to rotate it, lightly resting it on the work surface to gradually stretch the edges. Now here's the real cool bit. I said lightly flour the surface. This is just so you can start working the dough and to make sure it isn't too tacky. Because now you sprinkle down a bit of cornmeal (semolina works too). Carry on working the dough out.. You can lay it down and gently tease it out, turning and flipping it all the while to get a nice coating of cornmeal. This gives the pizza a nice texture (a bit like how domino's do it).

Lightly oil your pizza tray with olive oil and transfer the stretched out base onto it. Make sure you've got a nice crust around the edge. You can Very lightly coat the crust edge with olive oil.. personally I don't though. Leave the base somewhere warm for 15 to 20 mins.

In the meantime, make your pizza sauce and grate your mozzarella. My sauce is about a cup of seived tomato (passata I think its called). A tablespoon of tomato puree, a crushed garlic clove, a teaspoon of lemon juice, about a tablespoon of mixed herbs, salt and pepper. Sometimes I grate a bit of onion into that as well. Mix it all up.

Time to dress your pizza. Fire the oven up first though (gas mark 7 or 8). Evenly coat the base with the sauce up to the crust, but leave the crust alone. Now sprinkle your mozzarella all over the layer of sauce so that it's nice and even. It's up to you how much cheese. You'll know when it looks just right. Make sure it's even across the pizza. Now put your topping on and for me that's pepperoni. Make sure you don't overload the pizza and especially don't overload the middle. Right out to the edges and make it look nice then into the oven.

Depending on your oven it will take around 15 to 20 minutes to cook. If your oven is a rubbish as mine you might have to turn it around whilst cooking to make sure it's even.
16/05/08 Enjoy your pizza
-17

Designed by computer, made in an industrial, automated factory and then cooked by a clown! What a way to do food!
Half the western world can only hazard a guess at how food used to end up on the table. You would be right not to pay for how it's done now.
Seems food is irrelevant, just so long as the restaurant looks fashionable, the food doesn't matter! A bit like having crap music, but hey at least i've got an iPod to listen to it!
The expression "Slave's to Fashion" was invented decades ago, but here we are still making the same mistakes.
15/05/08 Missing The Point
2

I know what you mean, the quality of a lot of these kind of places seems to be going down. The staff are pretty crap paid though and moral may be low, but that is no excuse to me!. They are there to do the job and do it properly or what is the point?. I just buy cheap but good frozen pizzas from Iceland or nicer ones from M&S, I never order delivery pizza these days now. Still nice to have in moderation a few times a year though. I've noticed Mcdonalds isn't as nice as it used to be, sloppy burgers, cold fries a regular happening so I avoid that too. Saving a packet cutting out fast food places and feeling and looking better for it too.
15/05/08 StarBright.
7

It's 'company policy', words we all dread to hear