My friend invited me over for dinner with her and her husband and as a treat we ordered an Indian meal to be delivered from well known Indian restaurant in Stevenage, Herts.  We have ordered from there before and enjoyed our meal however once dished up found we had been sent a pilau rice instead of peshwari naan.  I checked the bill and sure enough they had taken our order down as a pilau rice not peshwari naan.  So I rang and explained, and they promised to send a naan out immediately.

Approximately 5 minutes into our meal as I dug my fork into a pile of lemon rice a fly crawled out from underneath it and scuttled across my chicken mulli and died shortly afterwards.  Shocked and horrified I looked up to my friend who was also staring at my plate and confirmed what had just happened before my very eyes.

I rang the restaurant and asked they send me a fresh lot of food and suggested they should refund the money as well.  To do this was beyond the powers of the person I spoke to on the telephone, so they needed to speak to the manager who would be back shortly and they would call back.  When they did, the big boss was required to make this decision so they would again call me back. 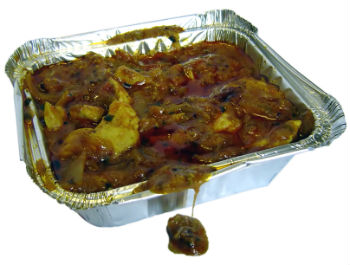 Half an hour passed so I rang them and spoke to the manager.  He asked me why I was complaining!  I have to say, he was exceptionally rude and put the fly and the order cock up down to the restaurant being busy but this was unacceptable I thought!  The manager then agreed he would refund us but only £7 and that was supposed to be for a mulli chicken priced £7.95, a lemon rice and a pilau rice that was meant to be a peshwari naan.  I pointed out to him that this wasnt the correct price and he said it would be just under £8 normally but a pound is taken off for delivery.  Is this guy for real?

After a very rude and brief barrage of abuse the manager told me if I didn't like the food I shouldn't eat there and hung up on me! Where on earth has customer service gone these days?

An hour later a man from the Indian takeaway turned up at my friends door and handed us £7 in cash.  A total lack of customer service for an issue they should be urgently addressing. My friend is so upset our meal was ruined and I was gutted that I didn't get the meal I had looked forward to all day, instead we were £32 lighter for severely substandard food with an incorrect order and an additional fly (at no extra cost you'll be pleased to know).

>you posted a picture of yourself
WOW nice put down....for a 3 yr old

Lrn2internet or perhaps your pants on head retarded.

But there again, discussing flys in curry's while the life we live is unsustainable and in rapid decline pretty much sums you up
20/11/11 lulz
-13

If the OP didn't complain about the fly would it have made any difference to the list below?

If these things are so important that everyday trivia becomes petty then why isn't your complaining about his complaint petty and unimportant?

Get a grip yourself. This is a gripe site where people come to complain not a change your the world and ensure world peace site. If one exists , post a link.
20/11/11 Sally
5

I've been in the hospitality industry and I've been peripherally involved in the publication of restaurant (and hotel) guides, so whilst you may not agree with my 'logic' I'm stating what happens, not what we might want to be the case. I know exactly how many of these guides work, what their morals, or lack of, are, and why they may not always be trusted.

Word of mouth recommendations are only valid if they come from someone whom the inquirer knows and whose opinion is trusted. I'm not talking about 'word of mouth' from overhearing women gossiping on the No. 26 bus.

Taking this a little further, as you rightly say, opinions are highly subjective, and the same restaurant can present a very different aspect even on two consecutive days. Only last week, I had a most enjoyable dinner in an upmarket pub in a small town in Derbyshire, went back on the Saturday night with friends, and for various reasons, it was quite a different and less enjoyable experience.
29/10/11 MikeP
2

Mike P, your sense of logic is somewhat lacking. It's true that some proprietors do pay for entries in the good food guides, but these guides also have a reputation to maintain if they are to sell any at all!! No? I look at these all the time and are rarely disappointed with the establishments they recommend.

Furthermore, fake reviews in books or on websites are no different than fake reviews from word of mouth recommendations - whether they be outright lies from respondees to enquirers who know little about them and can't tell how trustworthy they are and, provide these respondees with an opportunity to slag off very good restaurants they can't afford to eat in or who chucked them out years ago for bad behaviour. Or these recommendations are from well meaning friends and other trusted associates - whose tastes and standards may still differ from those of the enquirer.

Ultimately, recommendations are subjective, no matter where they stem from, and none can be completely relied upon.
28/10/11 Grumpy xx
0

Word of mouth is a powerful tool to deploy in such situations, either to get recommendations or warn people off.
27/10/11 Timelord
-4

Contact your local council and report the fly in the food. With any luck, the restaurant will be inspected very soon and maybe even closed down, if their standards are so lax that there was a fly in the food. This is disgusting and illegal by any standards, and as for their response to your complaint, words fail me!
27/10/11 Palindrome
-4

Good Food type guides often consist of paid entries written by the proprietors, and are of limited value. You may have seen recent articles about TripAdvisor, as another example of how fake reviews can be posted to either praise or criticise an establishment. Word of mouth local recommendations are uusally the safest.
27/10/11 MikeP
-6

Why not look at the good food guides for recommended restaurants in your area. They don't always contain every good restaurant there is; but the restaurants they do feature won't be bad ones with a poor reputation for cleanliness, food and beverages and customer service. Smaller businesses are not always consistent with customer service; but it's also true that customers sometimes have unrealistic expectations of them by expecting the same kind of generous refund polices that go way beyond the legal minimum standard as they would get dealing with large multi million pound corporations. Small businesses can't offer that degree of consistency - and they employ understaffed, underpayed and overworked staff and mistakes can and do happen; and they also get mucked around by customers too who don't pay or complain when there's nothing to complain about or don't turn up when bookings take place - losing them lost revenue from alternative bookings they turned down in the meantime. The only way you can expect better treatment is to become a regular customer and that isn't likely to happen with this establishment, so it seems. There's no excuse for poor hygiene though, but at least you got a refund.

Chalk it up to experience and vote with your feet by going elsewhere in future.
26/10/11 Grumpy xx
23