Are all the owners of small, private restaurants and cafes trying to be like Gordon Ramsay?

My wife has worked for two restaurants, one hotel and three cafes, with several owners and head chefs (often they are the same person) coming and going.  Each one had the same type of personality: rude, obnoxious, foul-mouthed, deceitful, and above all, they were egomaniacs!

Each has failed to pay staff correctly and have often fired staff for trivial reasons, or for no reason at all.  Each of them has refused to offer proper contracts, job descriptions or pay National Insurance (all paid with cash, which has inevitably been wrong).  As for sick pay and paid holidays...  One of her employers provided such a nasty lying reference basically accusing my wife of criminal activity among other things.  Each establishment has had very high staff turnover and some of the owners have boasted about this in public. 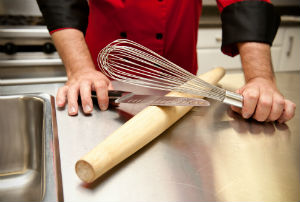 The head chef/owners have always seemed so negative about their staff, menus and even customers.  Each one takes delight in being critical.  Nothing is ever good enough, yet they won't train staff properly, always shout at people for no reason and questioning their work, and they all seem to enjoy belittling people and treating the staff like dirt.

Kitchens can be such unpleasant places to work, but only because the head chef/owner wants it to be.  Yes, the catering trade works anti-social hours, but working unpaid overtime under threat of being fired is blackmail.  With jobs hard to come by, these villains can threaten their staff with anything they like.

The latest restaurant has had a 100% staff change in less than 9 months, with an average of 2 leaving a month!  This in turn leads to the owner calling people into work at very short notice (i.e.  30 minutes).  Fail to attend and guess what happens..  goodbye job!  This same owner ordered his staff in on a day the place didn't normally open, to provide for a private family function.  He refused to pay the staff, saying it was voluntary to come in, but anyone who didn't would have been fired!

Is it the same as this everywhere in the catering industry?  Why spend time and money training, paying for uniforms and trying to make a career out cooking, when the rewards are so poor and the conditions worse?  Well, this time, my wife has decided to walk away and look for a new career.  Cooking, it appears, is for those who want to be screamed at...

Yes, they are almost ALL bastard cockroaches. I hope this industry crashes
16/06 Turbo
0

Absolutely yes. Almost invariably. But, you have recourse: your wife should report the employers to HMRC, trading standards, and every newspaper in the vicinity. The bastards will not be so quick to act in the same way in future. Oh, and your wife will receive compensation at the expense of the assholes who refused to treat her like a human being.
11/07/20 SeanBo
0

Got an update here,
Not for me but my friend who has just quit his job as a dishwasher and Porter for a nursing home kitchen. He would tidy up from breakfast and get ready for lunch , only part time , 09.00-13.00 4 days a week but varied through week to week.
He was forever getting moaned at by eastern Europe women who would talk about him to each other in their own Language and an old man who was one armed from an accident who was constantly unpleasant.
The Job itself was not bad but the people were a pain in the arse. My friend said that he thought they sound bitter about their own lives and looking for someone to take it out on.
In the end after 2 years of this he recently resigned.
I said don't bother going back to the same industry . Look for something else that you are happier with
15/04/20 ahforfoulkessake
0

Reminds me of a stint of work experience I did when I was at college. It was in a hotel and the owner was infamous for exploiting the free labour of students like myself. He was so bad that staff at the college knew about him and warned me to stay away. I obviously had no idea when I started there but I could understand why. For example, rather than learn how to work in a kitchen, which was why I was there, I was instead treated like a servant and told to clean stuff. I never learnt a thing other than the fact that the main chef was lazy as f***.
10/12/19 Moan McMoaner
5

Hotel work and catering have long had a reputation for poor wage and conditions. The work is hard and there is a lot of exploitation. If you have a catering qualification e.g. C&G 7061 there are good jobs to be had but they are rare. Being a cook is always hard work. It can be satisfying if you have your own place or work with a good team. If not it can be soul destroying. What to suggest? Other than changing jobs often in an attempt to to find a good employer, I can't suggest any magic solutions.
03/03/18 Phil
0

I have been cooking for 30 years as of April 2017 across the USA and Europe. All the gripes are true. I had to take time off to take care of my mother with serious health issues. Even after working 70 plus hours a week and really increasing their profits I was essentially put on the curb by a restaurant because I had to take time off. If the general public knew how badly we were treated they would learn how to cook at home. I have Gordon's stress wrinkles, the only kickback from the evil greedy soul sucking clueless arse holes that are restaurant owners. There has to be a what-goes-around-comes-around someday.
I had a knee injury at my last job, totally Chee's fault. I went from Golden Employee to 12 hours a week to their avoiding worker's comp and a possible inspection that would surely shut them down. These people need to be taken to task and be responsible for our abuse!!!
01/01/17 Jen
0

Very stressful but not the worst job I have ever done. This is just a typical example of people be-moaning hard, honest toil .All too often we put up with people like this in this country. Customers get treated with manners all the time in these establishments. As usual in true typical fashion we are expected to find an easy job & enjoy the perks that come with it.
Ever worked in a high class restaurant? Since when has hard work hurt anyone, yet it doesn't rank high on the 'bucket list' of most people. You did the right thing to try hard work. You should have refused the easy jobs sooner - the full joy of manual labour work gets a lot out of one's system. One word of caution though - know your rights and stand your ground.
02/07/14 collar
-1

Dave,
I do not work in London and did not then. I live in Dartford, which is pretty pricey itself due to having very good train service to London, 3 lines going that way, 1 towards gravesend and medway plus the Bluewater shopping centre opened 1998 with close access to dartford bridge M25 etc so many people create an artificial demand which encourage shops and local landlords to up their rates by using the train station and bluewater as selling points.
We're not under Oyster card system though we're inside the M25, which BoJo suggested he would change as people who commute to London for qwork are ripped off just by being outside the travel zone areas when we have 3 buses that are TFL routes serving Dartford and Bluewater that take oyster and some of the newsagents locally sell oyster cards and top ups.
30/05/13 ahforfoulkessake
-2

No, don't say how much you earn after rent and bills blablabla are deducted. We are all left with just a few pennies after everything is paid for, but that's not how much you earn! There's no point saying you are working for peanuts because you live in London and after paying your rent you are left with very little.
30/05/13 Dave
-9

the person who is telling the story sounds like they've had a terrible time of it.
I worked in a local harvesters at one time and can agree on the pay and working times being anti-social but thats because the majority of customers are there when they're off work such as evenings and weekends.
Pay was my big bugbear when i was there as I was too young to qualify for WTC as a single person(you have to be 25, im 27 now) but I was living in a bedsit iwth all the bills to pay myself. Yet the pay was such I had to work 60 hours to clear £220 after tax. Half my pay was gone on rent and electric meter before i saw it never mind food shopping.
I think the real tragedy was the head chef I worked with. Good man but a sadly wasted talent. Spent 3 years of catering college (18-21) properly trained in good foods and was 30 when i worked there and had been there since leaving college.
Was getting £9 per hour and had a family to support and a mortgage.
A frenchman who lives near me who's a trained chef is on double that and doesn't do a full weeks hours and gets roughly £400 after tax working in London in an expensive place. Matter of luck I suppose.
21/05/13 ahforfoulkessake
0

You know what, one of the perks of working as a cook is to spit in the dish before it is served. With the knowledge that your customer will be eating your saliva while saying 'this is delicious', you should feel much better! LOL
09/05/13 Ed
-3

I've worked in catering for many years and can't say that it's much different to any other business.
Why would an ex-employer accuse your wife of 'criminal activity'? There's no smoke without fire in my view and perhaps you should take a realistic look at what your wife is actually capable of professionally. One man's 'I'll take the scraps home for the kids or even sell them' is another man's 'criminal activity'. Sounds like it was happening on an industrial scale to warrant that sort of language.
30/08/12 Ben Petersen
-14

After 25 years in the trade I have one advice to young chefs: find another career. Before it's too late. You'll get exploited, yelled at and treated like a second class citizen.
28/05/12 chester
-7

Britain is selling out

Dear Timelord. The reason television Chefs have so much money is down to selling themselves and their name to anything possible. Advertisements, Supermarket campaigns, 'their brand of foods' and even plates and cutlery. (Are plates classed as cutlery, no idea on that one.)

Why people feel it necessary to buy cutlery because it's got a bonehead's name on it is beyond me. Would having a celebrity chef's name on a knife and fork set make it any better than your average set? I seriously doubt that.
02/05/12 Britain is selling out
-5

Well, you could always try reporting an ex-employer to HMRC, particularly if they didn't provide a P45.

The taxman always picks on the construction industry for shirking on taxes; but I have always thought the catering industry was just as bad.
24/04/12 grumpyoldwoman
0