Having just come back from visiting my brother in Wales I can testify to the fact that the old addage 'The customer is always right' is well and truly gone.  Whilst good customer relations and service might be common in many establishments around Wales, there wasn't much evidence of it when we visited The Red Lion in Llanidloes, Powys last Sunday.

Once a year our family get together in Llanidloes for a weekend of camping, socialising and relaxing.  This normally coincides with the fancy dress street party and it's usually a nice little break for us all which would normally end with lunch together at the pub.  It has become more or less a tradition and it is part of the holiday that we would normally look forward to.  This year, however, after a poor show of bar etiquette from the barmaid and a less than satisfactory outcome when this was brought to the attention of the manager, we certainly won't be returning there again!

We arrived at the Red Lion at about 1 o'clock and began ordering our meal tickets and drinks.  They have a system there whereby you buy a ticket and take it through to the restaurant which is sort of self-service.  The issue here was that whilst we were being served the barmaid switched from us and began serving some locals who had just walked in.  At this point, some of us had purchased our meal tickets and drinks, but two of my sisters had yet to order.  Anyway, the local woman got her lunch ticket and went off and the barmaid turned around and began serving my sisters again - which was fine until the local woman came back and decided to order some drinks.  This meant that our barmaid yet again diverted her attention to serving the local woman whilst a number of our party were left waiting.  In the end my sister decided she'd had enough of this treatment and decided not to bother ordering. 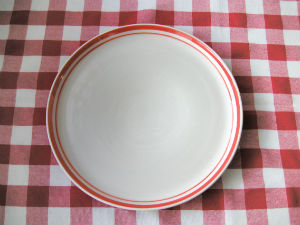 This was bad enough, but after our meal when my brother spoke to the manager about the incident, she sided with her member of staff and was totally uninterested in anything that we had to say to her.  With comments like "I don't think she would done that" and "We're very busy at lunch time you know".  She even said something along the lines of "She has had a lot of things going on..." (probably not the exact words, but along those lines).  Basically, there were some feeble excuses, a lot of denial (almost to the point of hostility) and absolutely no attempt whatsoever made to apologise properly.

All that would have been necessary in this case was a proper apology.  Oh and for the record, saying "sorry, but..." and then launching into a tirade defending the member of staff in question doesn't actually count as an apology!

I was at the Red Lion the day this 'man' was here and complaining (I am a customer and have been for many years). He was extremely rude! He was pointing his finger in the Landlady's face as he was 'talking' to her. Now let me clear something up - I was standing at the bar when he got served. The 'ladies' (his sisters apparently) were stood behind a lot of other customers talking!! This gentleman in no way what so ever pointed out to the barmaid that these ladies were with him - how was she to know!!?? They continued talking until well after the others had been served and then they went off on one. One went out to 'cry' as she was so hungry. I'm sorry, but these are the type of people to want something for nothing. And just to add to this - he was back in this pub just last weekend.
05/04/13 Chappie32
-9

well did you ever.

Avoid York at all Costs

As well as being a very insular people, in the retail and leisure environments the welsh are a belligerent race and one of the few peoples in the world who make us English look positively hospitable. Once upon a time I was one of about 10 area managers working for a company operating in such a market in England and Wales. The area we all tried desperately to avoid being lumbered with was Wales. Not because of the drive – but because of the managers and staff we would have to deal with who seemed to think that it was outside their terms and conditions to be asked to put the slightest effort into their job and interest in their customers. I supposed I shouldn’t have been surprised to find on one visit to one of my stores that the team had closed up in mid-afternoon to go to the pub. According to the shopping centre manager this was a regular occurrence. I have no doubt that they thought it totally unfair when they were subsequently dismissed for misconduct.
24/07/12 Splott
2

This website is called the weekly gripe where complaining is a prominent feature. I've noticed you've complained loads on various other articles on this website?

Besides, even if your story was truthful, who are you to say the original griper is the problem because you had one good experience? I'm sure everyone who's used this website has experienced some sort of customer service problem in various restaurants, eateries up and down the British Isles.
18/07/12 Pedro
-10

Just like to say, I am sorry to see posts that say I am not being truthfull about my night in Wales, it seems they have been posted by wingers who complain about everything, so they will never experiance the kind of welcome my family and I recieved in Wales,
17/07/12 athair_siochain
-13

I know people have already rated down Athair's comments but take it from me, his first story is beyond the realms of bulls*** I don't know where to begin.

Just because we can't see or hear you, it's still easy to spot a liar.

Well we visit Llanwrtyd Wells (a few miles north of LLanidloes) from time to time and are always treated as welcome customers in all three of the pubs - Bell Vue, Neuadd and Stonehouse (in strict alphabetical order)
16/07/12 Charmbrights
-8

Don't go to Paris, will you. When I was there last, I was blatently ignored in the shops whilst Parisiens joining the queue behind me were served first. I may as well not have existed. No question of half serving me first.
15/07/12 Grumpy xx
-3

Can you tell me why you think that would be worth doing when attempting to discuss the matter face to face was a wasted effort and achieved nothing? Some people with 'bad vibes' can't be reasoned with and can't accept there's a problem with the way they run their establishment.

Some people have good vibes that are recognised, other with bad vibes need to change their attitude, will the writer of the gripe please send their name and address to the Red Lion, instead of complaining behind a nick name. maybe you own the pub across the street from the Red Lion.
12/07/12 athair_siochain
-7

No chip on my shoulder, just rude pub staff who have no regard for customer service. By the way, the fact that the pub is in Wales isn't the point of the gripe.
11/07/12 Gripe Author
11

Welcomed by a friendly Welsh Pub-Landlord and given free Bed and Breakfast, invited to a sing along with the Locals.

Short change by bar staff buying a round of drinks