My friend and I visited Harry Ramsden's at Blackpool with our two year old daughters.  We ordered off the main adult menu, Haddock & chips with a pot of tea £7.95 each.  We explained to the waiter that our children wouldn't eat a full meal, so could we just have 2 sausages and they would be able to have a few chips off our plate.  The waiter was fine with this.

When it was time to pay our bill we discovered that we had been charged £4.49 per sausage - this was basically the full price kids menu.  We spoke to the lady on the till who said that we had to pay for a full meal, even though we didn't actually have everything on it.  I told her that that this was ridiculous and that the waiter hadn't mentioned this when we ordered our food, but she insisted that he would have done and went off to speak to the manager. 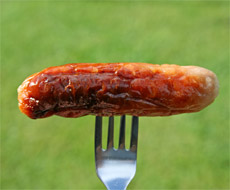 The manager came over and from the moment he spoke to us he was rude, antagonising and condescending.  He frequently interrupted us and insisted his waiter would have explained their policy and basically accused us of not being able to read!  All through this he kept referring to us as "My Love".  I asked him to stop this as I found it very rude and patronising - as a result of which he did it even more.  I reiterated that at no time had the waiter said anything about having to for a full meal for the children even if we only had the sausages.  If he had then I would have just shared the food with her off my plate and not paid £4.49p for a full meal.

He just wouldn't budge and just kept saying "If you look at the menu it says - children's menu £4.49." I pointed out that we didn't want the full menu, we just two sausages and where on the children's menu did it say you had to pay full price for one item.

We were basically made out to be liars and illiterate ones at that.  We were treated in the most arrogant, patronising manner when I mentioned to him that other restaurants such as Wacky Warehouse and Pizza Hut offered a better, more flexible service when it comes to children's meals.  He just laughed at me and said "Wacky Warehouse?  At Harry Ramsden's we are a high class restaurant."

I eventually paid the bill in full and we left.  I certainly wont be recommending Harry Ramsden's in Blackpool to anyone I know.  No customer care, put down and patronised by the manager and made to look stupid.  Oh, and let's not forget the fact that we were £8.98 out of pocket for a couple of sausages.

This part of the world is Victorian Britian. It has not moved with the times. Queen Victoria would look down on you for being poor and not able to pay. Who are you to quibble with the boss? Remember Faulty Towers? You are a mere worker and should places where workers can afford it - just like they did in South Africa.

"He frequently interrupted us and insisted his waiter would have explained their policy and basically accused us of not being able to read!".

So you were told by the waiter and didnt bother to read in thin air what he had just said?

I think the manager needs some training.

and oh Abster. you where stupid, we hate customers like you and hate your children.
09/07/10 we hate Abster.
-2

Abster- No what you and your friend can do, take your two daughters and get the eff out of my restraunt and never show your ugly faces in here again.
09/07/10 we hate Abster
-15

Being in the north is bad enough, but to compound that error by then going to Blackpool of all places AND eating at "classy Harry Ramsden's", you are surely asking to meet an insolent manager like the one at Harry Ramsden's in Blackpool. It seems to me that there is a failure to communicate at the heart of this gripe. If the original poster had made clear her expectations of a reduced price for a reduced portion, the problem could have been avoided. That said, since the meal provided was not a full meal, the manager has no legal position from which to demand a full payment. You can still take this up with Harry Ramsden's central office if the incident occurred within the last six years and you still have the evidence to provide.
09/06/10 anon
-21

@moan, moan, moan - Your attitude, as a former Harry's manager, just backs up the OP's complaint about condescending attitudes from the manager they encountered. If 'their' manager had the same attitude as you it's no wonder they're on here complaining!

I've been to the 'restaurant' in question, and I wasn't impressed by the service or the food either. Blackpool in general is a minefield of poor customer service; I blame it on the fact that as the residents are so intolerant of tourists, everyone gets tarred with the same brush. But that's no excuse for this kind of tone from a manager.
09/06/10 Mallory
-8

I had the misfortune to go to a work friends funeral today, the wake was held in a hotel in my town, and a pint of fosters was £3-20, what a complete rip-off, you can buy decent beer for 60p a pint in a supermarket, and a really nice tasting quality sausage must cost 50p at the most in a supermarket,

My motto is watch every penny, don't pay these prices if you can possibly avoid them.
16/03/10 Gainsborough lad.
12

.......a fair reaction under the described circumstances, but it is a criminal offence. I think the correct is to register your complaint, leave your name and address, and tell them you are taking it up with Trading Standards.
16/03/10 MikeP
0

Whenever this kind of thing happens to me, I carmly tell my friend/family to take the kids to the car/leave and I will wait and deal with the bill, then five minutes later I will calmly turn around ansd walk off without paying for anything. Normally for this you will be banned from the resturant, but with service like that it's not as if you intended to return anyway
16/03/10 Richard
-1

I am not in the food industry , but I think we compare the cost of providing food at home and we forget that there is the cost of the premises heat lighting staff wages etc I dont mind paying for food if it is good quality and edible, but most of it is plastic tasting and from abroad, and I would be annoyed at paying that price for sausages that have no health benefits they just fill a hole and make you hungrier in the long run, I know it is hard to find food that children can eat easily and most motorway places only supply frozen junk so I sympathize.
08/01/10 GM
-10

What did you expect?This is rip-off Britain.Complain at the appropriate time.Don't be ripped off.
01/09/09 Frank Furter
0

I used to work for the same company that owns this restaurant in a management capacity, and have to say that if the manager of the said restaurant did actualluy refer to you as "my love" I consider this to be wrong.

Having said that, if you had tried to share you food off your plate then I would not have allowed that in my restaurant. It's amazing sometimes, (although thankfully not very often) someone would order one meal and ask for two plates! What a cheek! I am sorry but no.

I think that you should have been made aware that you would have to pay the full childs meal price and again if you was not made aware of this then that is not good but it is not their duty.

If you don't like the service or the food or even the attitude in that restaurant or even the company policy then you will know in the future wont you.

There are an awful lot of people like these places.

Frankly from my point of view children and restaurants don't mix, I believe they are usually a nightmare.

The people in these sort of places have to work so hard for their money givr them a break.

If the money was tight or you were just watching the cost then really you should have asked in the first place. You decided to have someting that was not listed on the menu and they served you what you wanted. So therefore it is your own fault really. At least you will no for the future wont you
02/04/09 moan, moan, moan
-20