I had a bad experience at Tesco today.  First of all I went to the deli counter where there was no one serving behind the counter, I waited 5 minutes at which point another couple of people turned up at the meat counter next to the deli, also unmanned.  Just then, another lady turned up next to me at the deli counter and I told her I had been waiting ages.

A member of Tesco staff eventually came along but went to the Hot chicken and cold salad counter opposite, this girl then decided that she ought to come over and serve someone, but she went straight to the meat counter.

The couple there told her that I was waiting first at which point she turned to me and said "I can't serve on the deli counter, I haven't had the training but someone will be over to help you soon".  Along came another girl who eventually served me, she asked me if everything is OK and I said "No, where's all the staff, why are you so short staffed today?" She replied "Sorry, yes we are a bit and it's only going to get worse." I'm not sure exactly what she meant by that!  When I finished my shopping I went to a checkout and was served by a man who was so slow it seemed as though he was still in training, he tried to find a bar code on my own battered cool bags that I take to put my cold/frozen food in! 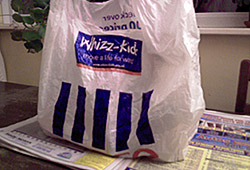 Job done I went home and unloaded my shopping, my hubby picked up the newspaper that I bought and he pointed out that it was yesterdays paper, I didn't believe him and when I checked, sure enough it was.  I called Tesco straight away having looked up a geographic telephone number first (I don't pay for non-geographic numbers).  I rang this several times but no-one picked up so reluctantly, I rang the 0845 number (not knowing how much this call was going to cost me).  I got through to a lady and now know that this number does not connect you to the store but through to a call centre who then ask you why you are calling.  They then put me through to Customer Services at my local store, but I was left ringing with no answer for 10 minutes!

I cleared down and tried again, the 'call centre' person suggested I try later.  Not content, I called again and eventually got through to the store duty manager.  To cut a very long story short he eventually agreed that next time I went to the store they would give me £5 compensation.  I am thinking of shopping at Asda from now on, maybe my blood pressure will be more stable if I do.

HOW I GOT MY EX HUSBAND BACK WITH THE HELP OF REAL AND EFFECTIVE SPELL FROM DR Osasu My name is Olivia Jayden, I never thought I will smile again, My husband left me with two kids for one year, All effort to bring him back failed I thought I'm not going to see him again not until I met a lady called Jesse who told me about a spell caster called Dr. Osasu , She gave me his email address and mobile number and I contacted him and he assured me that within 48hours my husband will come back to me, In less than 48hours my husband came back started begging for forgiveness saying it is the devils work, so I'm still surprise till now about this miracle,i couldn't conceive but as soon as the spell was cast,i became pregnant and gave birth to my third child,if you need any assistance from him you can contact him via:email: drosasu25@gmail.com Or WhatsApp or call him now:
+2347064365391 . Dr.Osasu also cures: 1. HIV / AIDS 2. HERPES 1/2 3. CANCER 4. ALS (Lou Gehrig’s disease) 5. Hepatitis B
28/01/20 Olivia Jayden
-1

I have been in bondage ever since my husband leave for another woman, It was really hell for me and everybody told me to forget about him but i could not because i love him so much, Things get worse until my friend Rose introduced me to this great spell caster Prophet osaz and i contacted him through his email spirituallove@hotmail.com,i explain everything to him and he cast a spell for me immediately after three days, everything turn around and Ahmed come to me on his knee begging for forgiveness that i am the one and only woman in his life now. i was surprise i have never seen such a miracle in my life. I am so thankful to this man and i will forever publish his name "spirituallove@hotmail. com"
25/08/14 Lamini
0

If the French gave our government permission to put up such notices, which I doubt Stalag14 they would not be true. There are free benefits. There is free housing & there is free medical treatment. There may be a method in this madness that I cannot percieve. However, whilst I withhold my vote I absolve myself from any responsibility for this insanity.
25/08/14 boblet
0

believe me J. I have just returned to the UK via Calais. The French have a big problem, immigrants come here via France, it is not mainland Europes fault, if we the stupid British hold out a massive carrot to the donkey, it is not the donkeys fault either. We entered with no check of my vehicle which could have held at least six immigrants. The situation is criminal
25/08/14 boblet
0

Boblet, I'm sure I heard and read this correct, The British Government has just allowed fifteen FBI border control officers to show us how to manage our immigration problems. Speaks volumes about the state of our system!!!!
25/08/14 Jethro
0

I am frustrated also. About what is going on in islam since a geeup or was it fatwat was put on Salman Rushdi. because of his book "Satanic Verses". I am also frustrated at a world that is still bowing down to islam. A site that does not allow me to say pakipakypakie but allows an inane thread to continue with no direction or logic whatsoever.
25/08/14 boblet
0

I took a TV set back to Tesco because the inbuilt DVD player did not work. They said that they could not replace it as they no longer stocked it. They offered to get me one from Tesco.com but that would cost me an extra £10. I declined and asked to see a manager. He was extremely rude (hands on hips and shouting and telling me he did not get paid enough!) and refused to do anything about it.

On the way out I was accosted by a security man who accused me of stealing the TV. I told him to arrest me or go away. That was the final straw.

I took them to the Small Claims Court. They did not contest it. I got my money and costs back and I still have the TV. I never go to Tesco now. I go to Asda which is nearby and the petrol is cheaper.
25/08/14 Dick
0

Hmm. It would seem that my comment didn't go down too well. Just shows how little respect cashiers actually get these days, doesn't it? Post a response sticking up for cashiers, get voted down. Be rude and disrespectful and a complete and utter rudebag and you tend to get what you want and people thinking your wonderful. I swear, the world is backwards.
14/10/13 Dolly
-5

If they're short-staffed then that isn't really their fault. People could have phoned in sick or anything. Heck, there could be some sort of crisis going on. The last thing anyone needs is to get some hot-headed customer in their face angry with a situation that is out of their control. Maybe you should get some perspective and sympathise with the needs of service-people. We are people too! We are not robots. We have feelings. We are also not scanning machines capable of scanning products at record speed. And yes, that person on the till could be a trainee. He could also have arthritis in his hands, or multiple sclerosis. Cut us some slack, please!
13/04/13 Dolly
-13

Has anyone noticed that slowly, little by little, the amount of supermarkets are continually increasing. Everywhere. Within a few square miles in suburban areas there must be around 4-5 of these places. Tesco I believe being the largest, are virtually everywhere..
Do we REALLY need all these supermarkets? How much clear profit are these insidious giants making to be able to afford more and more premises? And all at the expense of the small premise shop owner whose day is all but done. Shameless corporate greed.
22/10/12 Oi
-7

Monday the 22nd Oct 12.Went shopping at Tesco's at Larkfield in Kent today only to be disappointed by lack of staff & empty shelves & this is not the first time. When I complained I was asked to fill in a form which would be sent off to head office by staff, I eagerly await what will happen
22/10/12 Hoppy
-11

Your lucky to have an Asda. West Sussex is Tesco country. Tesco Expresses springing up everywhere but not one Asda. It really does make you wonder if someone on the council is taking a back-hander. The main Tesco at Bognor is appailing. I shop there because my journey to and from work passes right through the car park and the next nearest supermarket is a mile away. We have a Morrisons in town which is a quarter of the size but seems to have more to offer and more variety. How many pallets of budget coke do we need? They revamped there store a year or so ago and since then it is a time consuming struggle to find anything. The store has been laid-out by retards. There are isles which would not look out of place in junk shops. Tesco has for a long time had an monopoly in the north of Bognor and their practices have become extremely lazy. This is most likely down to piss-poor managment. One hundred yard up the road we will have a Sainsburys soon. Thank God. I know where my custom will be going.
02/08/12 happybunnyNOT
-3

Thank you for labelling me unable to think. All I'd like to do is complete the weekly shop without being asked this boring, inane question EVERY single time I go. Put a sign up if you're that concerned, then it might save time.
It's even worse now these self serve machines have been installed, now we all have to listen to the simpering, patronising woman telling us "please insert your clubcard". Not even = "if you HAVE a clubcard, please insert it now".
It's an insidious marketing tool, nothing more.
10/04/12 Oi
0

To the person name "Oi" I am an employee at a Tesco store and for your information we are told to ask if you have a clubcard because many people forget to hand their clubcard to be scanned. I have lost count of how many customers pull a funny face if they forgot to give their clubcard and I say iy csn,t be scanned once they have paid. Customers really cannot think for themselves.
08/04/12 Tesco Employee
-2