So this is it the French have finally decided to succumb to closing the Sangatte camp, on the grounds that we in the UK accept half.  Why?  Have we not got enough British Citizens already?  Now where can we place them? Government decision, in the oppositions constituency. What are we talking about Pawns in a chess set?

No, we are talking about taking 750 asylum seekers, and sticking them in between two surrounding villages of Bicester (Arncott and Piddington).

Bicester, to those who do not know it originally was a small market town in Oxfordshire, it has now grown with the economy to give good housing and good access to both London and Birmingham. Unlike our other towns in Oxfordshire, it has a very low ethnic minority count.  It is not that we are racist, it is just that the surrounding towns and Cities have greater amenities to attend to peoples religions/beliefs.  We do have the Central Army Ordinance Depot, on our outskirts where army personnel live, one of these villages being Arncott.

Now as a town, there has always been a restlessness between the locals and the army personnel who also want to use the public houses within the town centre, often causing the local police and the military police to sort out these disturbances.  So now lets put 750 Kurds, Albanians, Iraqis, etc. in a volatile environment where there are not many British Citizens and young lads from the local army barracks, what are we looking at?  I dread to think.

They almost always end up doubling in size. 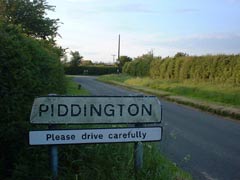 The troubling thing is that like all detention centres, prisons, etc. we all know that when they are built they are supposed to house a certain amount, the problem being that they almost always end up doubling in size.  Sangatte was built for 700, it now has over 1,500.  Arncott and Piddington between them house 700 people (Figure from the Sun 23/05/02), so what is it going to be like with 750 Illegal immigrants, possibly double that in the future.

Another thought, is when they were confined to one area with good amenities, for example Campsfield House and the detention centre in Luton, they are determined to damage it, most recent being the fire in Luton.  When they have their freedom as they do in Sangatte they go round with knives attacking each others community, Afghans against the Iraqis.

Sangatte has turned from being a nice seaside village into being a war zone where people dare not leave their homes in the evening, is that how we want people in our villages to feel?  Do we want our town to turn into a free for all between all the young people?  Could Bicester retail shopping village be a place where you might go with a wallet/purse, but going home without it may become a common feature?  Easy picking for free loaders coming to live at yours and my benefit.

Just remember next pay slip, how much tax you pay goes towards these guys who have fled not because of the trouble in their country, but because they are in trouble within the security forces of their own land.

Great. So let's deport all those hard working, intelligent, polite and civilised Polish people and bring back the drunken English slobs whom the Europeans have had to suffer for so many years. Great move. Well the drunken slobs will be in good company in England and this English man doesn't care because he's had enough of the indoctrinated, racist English and is taking himself and his family to a more civilised country. No regrets.
14/06/17 James
1

@Plip, If you think there's too many here now, just hope the "STAY IN THE EU" brigade don't win the coming referendum. Even those that intend to vote to stay will quickly realise they have made a monumental coc-up as the EU takes revenge on the UK by dumping as much unwanted, unskilled dross on us here. When will it finally sink in that the Europeans and the British will never "Be the best of chums".
03/05/16 Next
1

"Cameron and Merkel clash over when migrant workers should be able to claim British benefits".

Merkel now seems to be the mouth piece for the rest of the EU, and as perviously said will never allow Cameron to stop benefits to migrants. And the reason why, this would deter the flow to the UK, thus leaving them all with Mrs M and Co.

Looks like the PRO EU brigade wants the referundum sooner than later. I don't blame them seeing as the BREXIT support is getting stronger every day with the peole of Britain, especially after this latest MACHETE attack in London.
25/01/16 Next
3

The port of Calais was temporarily closed on Saturday and services were disrupted after a group of migrants briefly boarded a ship. It is understood that about 50 migrants in Calais boarded a P&O ferry named the Spirit of Britain, while it was unloading.

Richard Burnett said: "This shocking breach of security clearly shows that the migrant mayhem in and around Calais is not being tackled. "This latest episode has made the headlines, but the many incidents of attacks and intimidation faced by our British drivers on a daily basis are going unreported as, depressingly, they are now being regarded as routine."

Watch as migrants storm through security fence to get on ferry to UK.

Heard the saying, "closing the barn door after the horse has bolted".
These young single eastern male migrants will soon become such an overwhelming force that the UK will not be able to stop them without armed force. The people of the UK are still not taking this threat seriously enough, perhaps because it's still across the channel and remote to them. The biggest magnet for the migrants is "benefits, free money, buckshee", Cameron knows this, thats why the european politicians are resisting so hard against his demands for benefit reforms. Work that one out for yourselves, but don't take too long.
24/01/16 Next
3

HITC
"Goldman Sachs backs campaign to keep Britain in European Union"
HITC - ‎1 hour ago‎
"Growing concern in the City about Britain's possible exit from the European Union has been underlined by the fact that the Wall Street firm Goldman Sachs had pumped a significant sum into the campaign for staying in".

As expected, the super rich are terrified of catastrofic financial losses if the UK people vote to leave the EU. They will resort to any measures to avoid it happening so as to maintain their grip on power and wealth. The people of the UK are just puppets to these hidden faces of power that think nothing but to retaining their positions in this world. Think hard and long before voting YES, because we are talking about the freedom of your childen and their childrens future independence.
21/01/16 Next
2

News report today. As expected, the EU will never give way to Cameron and the UK on it's demands for staying a member.
@ David Cameron, Come home and give us the Referendum and stop wasting everybodys time and the tax payers money, they are playing you for a fool.
20/01/16 Next
2

DAN:
Kafir: An Arabic term used in an Islamic doctrinal sense, usually translated as "unbeliever," "disbeliever," or "infidel".
It is used as a derogatory term and alludes to a person who rejects or disbelieves in God and the religious truth revealed through the mission of the Islamic Prophet Muhammad.

To them we are less than a dog turd and are to be exploited, cheated, killed, outbred, etc. To make matters worse the politicians and do-gooders allow them to do it.

Examples: 100+ Sharia courts in Britain and the frothing at the mouth of the loony left because Cameron suggest they learn English.

As I have posted before, where we live many females are NOT allowed to learn English and many are locked up at night!
19/01/16 Stalag14
4

"The only thing necessary for the triumph of evil, is for good men to do (say) nothing". Edmund Burke 1729-1797.
@ Dan, Well spoken. It is refreshing to see that the obsene human rights gagging act of free speech imposed upon us has not frightened everyone. I hope people realise that by agreeing to staying in this union with the EU all hopes of retaining independence will slowly be taken. Don't be fooled by these renegotiations, they will never allow the UK to dictate to the rest of Europe, they will never give up their power base, which is controlled by the super rich, for the rich and only the rich.
19/01/16 Next
4

Saw this on another site, very true

Muslims are the most amazing immigrants in the world. While others are grateful to be allowed to live in civilised country in the West, Muslims do everything in their power to get in, even when they have been refused entry. This includes, fraud, illegal entry via the tunnel or as stowaways.etc.

But the really unbelievable aspect of Muslim immigration is that having been granted permission to stay in any Western country (sometimes by appealing all the way to the EU court), they immediately start to think of ways to harm the country that has been generous to them.This harm can take many forms.

1. Benefit fraud
2. Housing benefit fraud
3. Electoral fraud
4. Financial scams
5. Drugs, people and arms smuggling
6. Use of proceeds above to set-up Jihad cells
7..Immigration scams to bring in more of the type listed above.
8. Mass gang rapes of tens of thousands of young girls (Rotherham is just the tip of the iceberg). Such is the eternal shame of the authorities- police Chief constables and Home secretaries, I don’t blame them for brushing everything under the carpet.

Finally, plot to mass murder the people who have been kind to you, as a means to change the constitutional structure of the country, and install an unspeakably barbaric system, Sharia, that makes Nazism look benign. These Jihadi plots are now the reason why we have to suffer humiliating security measures.

Muslims add nothing to our commonwealth. They do subtract a lot in resources without contributing anything of value. Moreover, they are a long term ( a mere 20 to 30 years), existential threat .
19/01/16 Dan
7

More than 700 foreign criminals caught in just two days: Fugitive wanted for 23 offences and man suspected of £11,500 fraud among those held in crackdown

Well said Stalag14 im just fed up of being the dumping ground of Europe, the government needs to stop making this country so damn tempting for them, I live in a town which is in the top ten for taking Asylum Seekers, which is having a huge impact on the quality of a once glorious town. I'm not saying that some people don't need help but there is a difference in helping and being taken for a ride.
21/10/14 Lancs
0

Lancs - Why were you fuming - what on earth is the point? do you really think we would pay less in taxes if asylum seekers were turned away?.... Collar

People, including me, fume because ALL the Asylum seekers heading for Britain have passed through other countries, but come here because we are a soft touch; free housing, benefits, medical care etc.

Frustrated trucker swerves his lorry at migrants near Calais