This may seem like a pointless gripe to some, but it is really starting to bug me.

My gripe is about our British flag, The Union Jack.  It is something that I am very proud of as I come from a proud British family with a British military back ground.  Now I know not everyone will be aware that there is a right and wrong way to fly our flag, and personally I think its sad that so many British people are ignorant of this.

To fly the flag the correct way up, the broad portion of the white cross should always be ABOVE the thinner red band running alongside it, at the point close to the top of the flag pole (top left corner as you look at it).  For it to be shown flying upside down is seen as a distress signal (traditionally in military and history dating back to 18th Century).  In actual fact it could be deemed insulting and theoretically still carries a punishment in England and Wales.

So why during our Queens Jubilee and coming Olympics does it seam that people cannot get this right?  Im not talking about little shops and private homes, an error there can probably be forgiven.  I am referring to the big name companies and the entertainment industry.  I have seen our flag in multiple newspapers and magazines UPSIDE-DOWN...  Seriously?  You just photo-shopped it and didnt bother to check that it was oriented the correct way didnt you? 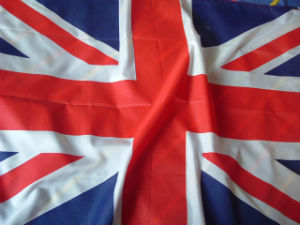 Big companies and well known brands could at least hire someone to just make sure these small details are correct?  If they set up another countrys flag the wrong way around Im sure there would be hell to pay.

Our flag is designed this way for a reason.  Even the supermarkets keep getting it wrong.  This is our countrys flag, if your going to make money when using it, then at least get it the right way round!  Once or twice is silly, but I see it everywhere!

I actually work for an American company and when they put up the flag for the Jubilee celebrations, they asked us which way up?  The ones getting this wrong most often are British companies who really should know better.  Its just so annoying.  Show some respect and check first if youre not sure!

Well thats it and I am sure I will get grief for this gripe.  But thats my view!

glad i see someone else caught that scene in Captain America. it was a flag hangout on a pole in front of a building.... about 1:13 in as i recall. i don't have the movie, but i know a stream where it shows every once in a while. i'm going to try to get a screen shot next time i catch it.
24/08/19 overlandflyer
-1

Couldn't agree more. Watching the Remainers at Westminster waving their flags in the background of TVs interviews and most of them are upside down! It only needs the BBC to mention it on live TV to highlight the problem.
28/03/19 Roy
3

I cannot agree more. What does it say about a nation and national pride when so many people do not know the difference and even when pointed out cannot see the difference.
17/07/17 Pleasurehawk
2

This one of my pet hates too. I have just watched a 'Captain America' film and they showed a British Scene with our flag the wrong way up. In those instances they do pay someone to get things right but still get it wrong. I tell everyone who will listen. Unfortunately it's the British people who just shrug. Have they no respect for their country anymore.
10/05/17 Virginia
2

Bloody Plonker, how can you say the image above is upside down? The flagpole could be on the right.
You'll be telling us next there's a front and a back to it.
24/12/14 Wity
-2

I fought it was meant to be flown upside down on acount of the fact that Austrlia is on thre wrong side of the world or somethin.
30/06/14 Boozer
-1

I wouldn't worry. When Scotland leaves the Union, and Ireland, the Flag of England becomes symmetrical once more.
18/12/13 Flying Colours
-1

You'll get no grief from me. You are absolutely correct, especially in pointing out that big-name British companies should get it right first of all. But all British, if they choose to fly the flag, should take the time to learn how it is to be flown. Also, thank you Ant for pointing out that it is only recently, thanks to false internet memes, that people started believing that the term 'jack' is only used at sea. http://flaginstitute.org/index.php?location=7.2
30/06/12 amerindub
-11

I did not know until today that there is a correct way to carry thw Union Jack upright.
30/06/12 Terry
-5

Jack: Not many stock images of an upside down union flag on a flagpole for me to use and I didn't have the time to photoshop it. Weird that someone commented on that and not a word about the flag going down the drain that I created a few years ago! Oh well :-)
28/06/12 Kenny (Site Admin)
-8

Some of the flying upside down is deliberate (I speak from experience). A passif f*** y** to the Queen and this crappy country.
21/06/12 EmigrantSoon
-14