It's one of the things that makes me bang my head against the wall with frustration.  Why can't people in the UK just be grateful for what they have got?  I get really annoyed at some of the things that people say, for example comparing Britain with another country and going on and on about how much better this other country is.  It makes me want to help them pack their suitcase and then say to them "Well if you like it so much, why don't you go off and live there then?"

Here's another example.  I've had conversations with people in the past and have perhaps been talking about a new piece of technology that's come out in Japan before it has in the UK.  These idiots then come out with a typically stupid response such as "And that is one of many reasons why you should make your escape out of this depressing dump whilst you still can!" Absolutely infuriating, and by the way, why haven't you left already?

send them packing somewhere else...

For goodness sake, I am perfectly happy with living and working in the UK no matter what problems befall us and it has to be said, other countries have their fair share of problems too.  Clearly, the people who describe the UK as a depressing dump are the ones that can't appreciate anything good about this country and I'd sorely love to send them packing somewhere else!  Why can't they just appreciate the things that are good about this country instead of concentrating on all the negative things? 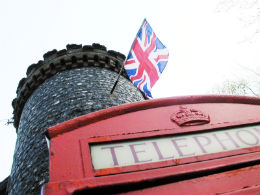 I have spoken with people who have visited the UK from countries such as Israel and Russia.  They have nearly all said that if they were given the choice of any country to live in other then their own, they would definitely come to the UK and that they love everything British.

Well I guess there are always going to be some countries that are 50,000 times worse off than the UK aren't there and and that's all the more reason to appreciate what we've got instead of slating it.

Just think of countries in Africa like Libya and Egypt with all of the constant war and deaths and extreme poverty!  Do you still think it's so terrible to live here?

I live abroad Portugal to be exact. No free healthcare or medication despite the fact I am a single mother. I still even have to pay for my daughter's medication and trips to the doctors. No benefits system, well there is but nothing like what you have in the UK. I have been out of work for the last eight months not through lack of trying and I do happen to speak the language fluently, there just aren't any jobs and I'm overqualified for the jobs they do have. No friends, even though the Portuguese protest to be the friendliest people on earth they're quite closed and like to stick in their groups. I've been here eight years so you think that'd be sufficient time to even make one friend!
The UK is a paradise and the people a delight in my opinion. Yes, I would come back if I could, tomorrow, without hesitation.
24/03/18 Cyclamen Cyborg MK4
0

LINK TO CORRECT GRIPE NOT WORKING "CHARGED FOR WIFI"
While I agree with the premise of this gripe, that wifi should be free on trains, hotels etc, after all it costs next to nothing to provide, I would counter that with WHY? as in why cannot people manage without their wifi-access-gadgets-toys?......ding ding ding ding.
The reasoning behind charging for wifi is probably the same as:
Leaving a large bowl of free sweets-nuts-crisps on the counter-table and people (kiddies) will help themselves until they are gorged, where as if they had to pay they would keep their pinkies to themselves and not touch.
Also there are the gluttons who will stream films and catchup tv to their device "because they can" if it is free.
It appears to me that no wifi equals no fix, as in drug addicts.
I would much prefer a free cup of coffee, Klingon of course!
20/12/14 Stalag14
0

People moan about the UK because of the idiots that run it!
Go to Eton then Oxbridge, get a degree in Seventh century French poetry, enter politics.

I can think of no other walk of life where such unqualified people have so much power.

"don't like it then there is always an option to leave."

As I have pointed out in another topic, just try and emigrate permanently to Australia, New Zealand or USA, (my choice of destination) very very difficult, unlike the ease with which immigrants, asylum seekers etc. are let into the UK everyday.
11/08/14 Stalag14
0

Deppressing dump or not, I'll grant you it's probably better to be here than in a crumbling tower block somewhere in the fall of Yugoslavia.
21/04/14 pet
0

I see Robert Mugabe is having a go at us now, does he have a hare lip or is he trying to grow a moustache to emulate his hero Hitler?
18/04/14 Tired and emotional
0

@ G: Finally a real man with some sense and to state all the obvious deep problems with the UK. Horrendously expensive, weather is awful, too many chavs and people on benefits, massive decline in morals and community, bad parenting and broken families.

This is why the UK is a hole and a dump. The people and culture are also a mess and need to bully and envy other nationalities in order to make themselves feel better.
18/04/14 Jason
-1

You could get in at Nissan or do a bit of contracting like a lot of Geordies/mackems and smoggies, spot on lads I've worked with hundreds of them over the years and I'd rather have them than a bunch of migrants any day.
23/01/14 Tired and emotional
-1

In the northeast it's not just that people don't have any money. Most people actually owe money to the banks. So no they can't just fly away - not only because they cannot afford that air ticket but also they would leave the banks with some bad debts. lol
It's so good not to have any money because you know you don't pay taxes you get council house plus pocket money for free including free medical and dental care.
23/01/14 Nick
-3

You might not have any money but I'm doing OK, I've been there myself it's as depressing as hell being hard up but believe me when you've got a few quid and move to a non 'enriched' area things look up, google 'Right wing blogger says feminist should be fixed' and you'll see how living in a rented flat in a ghetto affects people.
23/01/14 Tired and emotional
-4

Oh yes this is a depressing dump indeed. Who wouldn't want to be on a sunny beach of Majorca, or even Barbados? The reason why people haven't left, is they haven't got the money!
23/01/14 Nick
1

How many aliases are you using? You have at least three twitter accounts, I like the cat in the bush one where you're dressed as a cat (fetish of yours?) it's not quite as strange as your blogspot profile where you have a photo of a pre pubescent Thai girl (I'm not asking about that one) or the Latvian blonde fest where you indulge in cross dressing, having identity problems? Tell us all about it, we're here to help, I see you've moved onto Romanians now are they the latest targets for your unwanted advances? Your rented one bedroom Shepherd's Bush flat is certainly a step down from their Soviet era tower blocks or even their Romany caravans. Never mind, pour yourself another drink and pretend all is well.
23/01/14 Tired and emotional
-3

T and E, still repeating the same old tired message, over and over and over and over, you're just like an old record stuck in a groove. Never mind though, you'll have some of those newly arrived Romanian immigrants living next to you soon, so you can tell them all about your friend Clint.
22/01/14 Nico
1