Britain losing its 'Britishness' is a common topic that is much discussed nowadays.  I am from Southern Africa and have lived in the UK for seven years (due to a certain dictator).  While there are numerous cultural and social differences between our 2 societies, I am grateful to be able to live in the UK and contribute to society, although I will never consider myself completely in-sync with what British society is today.

The British people have a right to complain and lament their loss of Britishness (almost all the British people I know/associate with from all walks of society consider this an issue).  Not being British-born, I can't possibly feel the same way those born in Britain do but even so, I find the following situations rather perplexing:

why does the UK not have a national day? 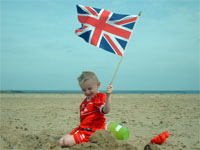 There is a distinct lack of patriotism in this country (some may say with good reason).  You can't even compare with how fiercely patriotic American, Australians, South Africans, Scandinavian countries, and many Eastern-European countries are.  It's a little misguided (and too little to late) when the flags come out for 'big' games or when the Queen is out and about.

Is this country still suffering from a guilt complex from colonialism?  I would like to hear the opinions of British folk who a) feel very strongly about this or b) don't consider this an issue at all.

Reading again my post it sounds a bit 'bad' and it wasn't at all my intention. What I wanted to say, is that if the cultural identity was lost so fast, perhaps it is that the identity roots, the folklore, the traditions...were not as strong as they are in other places not just in Europe but also within the EU. Many other EU nations keep their cultural roots despite high levels of immigrants. It seems that English were happy to assimilate the culture, specially the food, of its immigrant population. Furthermore, I believe that there is not a particular day in each English town were people dress with their particular traditional and folkloric dress and this was previous to the arrival of immigrants in relatively 'large' numbers.
02/11/14 OLE
-1

I'm from Spain and for me one of the most typical things of Britain is chicken tikka. In my country, until the beginning of the crisis, the % of foreign-born population was higher than it was in the UK. Nowadays, even with such a major crisis, this % stills very similar for both countries. In fact, there are more British citizens in Spain than Spanish in the UK and just 22% of those British are above 65 yo.

Many Spanish business now belong to Chinese. The second most numerous nationality of immigrants in Spain are Moroccans (the first are Romanians, around 700,000 of them) so we do have mosques.

We participate in Eurovision and since our NHS is free and education it is much cheaper than in England (as it is also in Scotland), all the immigrants can benefit from than situation.

WE do have a national day, even each Spanish region has its own day. We are proud to be Spanish and we definitely have a strong, rich culture that we protect and promote. As Scottish do or Irish or French...maybe in England it wasn't much too keep that you all embraced curry and Chinese take away so avidly.
02/11/14 OLE
2

Just goes to show that people will try and make you believe anything!

"that is that UKIPBNP are not fit to govern and those with a degree of common sense know it."

That may well be, but are any of the other parties fit to govern?

Conservative = Eton Toffs who have never had a proper job in their life, rich bastar*s with inherited weath, bankers friends.

Boblet, the one thing that worries me is that these politicians defect from one party to another under the guise of dissatisfaction when in reality it is about improving their own personal likelihood of being re-elected. It has nothing to do with politics or their beliefs. It is purely about their personal career prospects.
29/08/14 Samson (Delilah's too busy to post)
0

I challenge anybody to name one honest person in Rotherham politics.
28/08/14 boblet
0

S&D All the parties will butter up or maybe curry favour might be a more apt saying or get in bed may even be more to the point? with any faction that they concider may vote for them.
Black, Brown or White or yellow, it does not bother them. They will make wild promises that they have no intention of keeping. They will lie.
I will not vote for liars so I cannot vote. How can anybody with normal moral standards go into a polling station & are vote for a liar?
28/08/14 boblet
0

Again, you seem to be giving a very simplistic argument Samson -

Not so much simplistic as concise! I could give you the full version but it would be a longer post than the entire Welsh thread! I won't waste that on a forum like this and you probably wouldn't read it even if I did.
I got the point across and that is that UKIPBNP are not fit to govern and those with a degree of common sense know it.
28/08/14 Samson (Delilah's too busy to post)
0

You hit the nail on the head with "tinkering". That's about all that they've done in all areas; tinkering around with small issues and micro-managing our lives to make it look as if they were doing something, while being fundamentally unwilling or unable to tackle the big issues.

The only reason I may not vote UKIP is fear of letting Labour in!
28/08/14 grumpyoldwoman
1

Yes, of course, I meant Carswell, not Murray. Considering that Douglas Murray is the antithesis of the dull, grey politicians, I'm surprised I made the error.

Again, you seem to be giving a very simplistic argument Samson - careful, might be becoming something of a habit I think. 'Couldn't cut it in mainstream politics' is an ambiguous phrase. If one thinks that mainstream politics is actually effective; that it works; then Carswell is a failure who has joined UKIP, and this can be viewed negatively.

However, 'mainstream politics' itself can be viewed as a failure, for all the reasons I, and many others, have given in the past. As Carswell himself states, Cameron and his awful government have failed to fundamentally reform the banks (I think 'tinkering' is the term he used), together with the failure to allow constituents to recall their MP. And, of course, the complete failure to control immigration as today's figures show, and the 'smoke and mirrors' deception over renegotiating the UK's membership of the EU. Mainstream politics essentially advocates a 'business as usual in the pockets of Big Business' approach to governing the UK>

Mainstream politics is the failure! Success in it can hardly be equated to success in a 'proper job' as you put it. Carswell has done well to resign and I suspect that many people will regard it extremely positively.
28/08/14 miserablemoaninggit
0

Fortunately no! Clacton is not in the Essex/Suffolk border region.
I'd move if he had been, and in any case he cannot assume the role now as it is officially vacant and he won't be an MP after the by election either.
But UKIPBNP should be grateful that they've got another person that couldn't cut it in mainstream politics on their books. They're like the political equivalent of the crown prosecution service. A load of dropouts that couldn't cut it in a proper job!
28/08/14 Samson (Delilah's too busy to post)
0

Shamima Begum shouldn't be allowed back in the UK