I am usually one for a good shop - especially for food, however this Christmas at Tesco was possibly the worst shopping experiences I have ever had.

The day prior to Christmas Eve I decided to take a trip to my local Tesco Extra, expecting it to be busier than usual I decided to allow some extra time for my trip.  However, the scene inside the store was hellish.  It was absolutely hectic with people everywhere acting crazy and just grabbing everything in sight.

I am usually a calm and relaxed person and usually it takes a lot for me to become angry - but by the time I had completed my shopping I was absolutely fuming.  The people were rushing down all the isles with no concern for other customers.  At first I was quite courteous and allowed people to pass me. This was until I realised that out of the people that I had been courteous to (approximately ten), not one single person said "thank you" or even acknowledged me.  How rude can people be?

Shopping nightmare at Tesco - It was as though I was totally invisible...

It was as though I was totally invisible and after half an hour of being jabbed in the leg by trolleys and hand baskets I was totally foul mood. 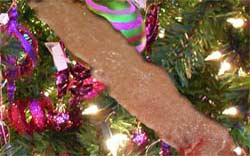 As if this was not enough - there was barely any fresh food left by the time these locusts had ravaged the shelves.  Looking forward to cooking a delicious chicken curry I sought after some chicken breasts, however when I eventually got to the poultry isle to my amazement there was not one single pack of chicken breasts left!  There was no bread and barely any milk.  This may have of course been my own fault for leaving the shopping so late, but this was just the icing on the cake.

As a result of this I have a new rule - in order to avoid a nervous breakdown and bruises on my legs after shopping, I will no longer shop at Tesco at busy times!

oh come on now this isnt thier fault its yours...anytime it seems like it is going to snow everyone stocks up on milk and bread get over it.Also seeing as it was near xmas you should have expected the no chicken part.Either get up early or go without dont expect everyone to bend over backwards so you can get your chicken-what gives you more right ot it than hem the ones who got to it first-and other stuff.
30/11/12 eddiebear
-4

Do your food shop at 6am on Xmas eve. Bliss. No queues or jippos just complete deadness. In fact I do my weekly shop at 6am every Saturday at tesco it's great.
21/01/12 Meow
-5

"I haven't shopped in Tesco for over a year now. Summer a year ago, I was looking for goods in the kosher fridge section and found to my horror an obviously anti-semitic customer had deliberately tried to offend Jewish customers by throwing in a bag of fresh prawns; salami and other offensive food items into the kosher section" Liberty Belle what a horrid thing for someone to do!
Whenever I visit Morrisons I always visit the Halal section of the Freezer aisle and leave some Pork Chops or Bacon in there!
18/05/11 Mr Frankley
-15

Nice one Andy, will have to remember that one! It's most likely to annoy them to think that you would leave such a precious chalice at home where it can perform no function.

I wouldn't mind but this card is such an insidious snide marketing tool - a fact which not many seem to get. Of course now I will get loads of "but I get points to get things" comments. Yes 40,000 points for a free pencil, wowsers.
31/12/10 Dave
-32

Remember Val Temple,who runs the Sergeant Bun Bakery in Weymouth. Dorset's trading standards department told her she couldn't sell "pig pies" because although they were shaped like pigs, they weren't made of pork. Her bird-shaped "robin tarts" weren't made from genuine Erithacus Rubecula, and her "paradise slice" contained no genuine paradise.Then there was the Black Mountains Smokery in Wales who got into trouble because they were selling "Welsh Dragon Sausages" that contained no actual dragon.So how come small traders find themselves flattened by the weighty disapproval of their local Trading Standards Officers when they just try to bring a little humour and imagination to their products, while the mighty Tesco's can tell downright lies with impunity?  One law for the rich ??
20/12/10 DSG
-5

My local branch of Tesco's is selling "Frontera" wine from Chile - in fact they've got the merlot rosé on special offer - an enormous double-size bottle for a fiver.  It's described on the label as "Chile in a glass", and I'm a bit puzzled about this. Does it contain bits of your actual Chile, then? Like, grains of sand or specks of vegetable matter from the Chilean forests, or little blobs of jaguar-dung or Indians' toe-nail clippings?  No, of course not. The label is actually a lie - the bottle contains no Chile at all.  But there's much worse to come. Down at the bottom in fairly big letters the label claims to be "bursting with fresh strawberries and raspberries". Now, like many rosés, the wine certainly has a fruity taste, but I'd be very surprised indeed if it really contained even the tiniest trace of either fruit.  So, another lie from Tesco's.
20/12/10 DSG
-19

We don't support our local shops selling british and localy grown food ,and then wonder why there is a queue at the local dole office ,we are supporting the supermarkets who are buying cheap food and forcing our own country on its knees, just to buy the latest gaget or flat screen TV ;what is priority your health or the latest fad! Our grandparents ate healthy localy produce and a lot of them live to a ripe old age Give the supermarkets a miss and keep a local shopkeeper and his staff in business, if we use them more they can bring their prices down and get the country on its feet!
11/12/09 Gian
-3

Jeanette - Why complain about everybody else leaving shopping until Xmas eve, when you did it yourself? Obviously, if everyone leaves there shopping until the last day, the shelves cant get replenished with the stock quick enough because all the "locusts" have had it all - you being one.
Why are women so obsessed with supermarkets anyway?
11/01/08 kev
0

I haven't shopped in Tesco for over a year now. Summer a year ago, I was looking for goods in the kosher fridge section and found to my horror an obviously anti-semitic customer had deliberately tried to offend Jewish customers by throwing in a bag of fresh prawns; salami and other offensive food items into the kosher section. I spoke to a member of staff who wasn't prepared to move the offending items as he was working on another section and pointed me in the direction of the manager. The manager was verbally abusive, raised his voice and told me he would remove the items when he had time (he wasn't actually doing anything when I approached him) and told me if I thought he was going to have someone manning the kosher section 24/7, I was wrong. My daughter and I returned to the fridge and removed the items ourselves. Forty minutes later when we had finished our shopping, we found them where we had left them - on the floor!
22/12/07 Liberty Belle
-11

Can't you see what TESCO is?

It's a quasi-fascist state just waiting to completely take over Britain.

Janette - I appreciate we all have busy lives, but it does seem a little naive to leave your shopping until two days before Christmas and expect a perfect shopping experience! However, to some extent I do sympathise - Tesco is Evil Incarnate, after all.

Nathan - count yourself lucky that your branch of Tesco opens another till!

This is complete myth at the nearest branch to where I work. It is consistently busy with office workers at lunchtimes, and yet 50% of the "ten items or less" checkouts are closed during this period, the remaining ones have been known to close when there has been half-a-dozen people waiting, the self-service checkouts seem unable to cope with 'unexpected items in bagging area" - ie. a bag with shopping in it, how outrageous - and queueing time at worst can be ten to fifteen minutes. Despite "all available staff to checkouts" calls over the PA, extra staff do not appear and customer service managers are a thing of pure fantasy.
Yes I do know the checkout staff are human too, and do need feeding, watering and the occasional comfort stop. Some of them are actually very pleasant. My issue is with the management, who seem to lack the common sense to stagger staff lunchbreaks in order to cope with demand.

But then again the management at this store seem to have lost direction of any area in the running of a supermarket. With the rudest customer service assistant in the world, broken chiller cabinets full of rotting produce, questionable BOGOF offers (2-for-1 on fatty-salty- sugary combinations, anyone?) is it any wonder the expectations of the customer feature so far down their priority list.

I will name and shame this store: Tesco Ballards Lane, in Finchley, North London

Your comments on how many tills tesco has open is rubbish. If there is more than one person in front of ypu they open another till. Sainsburys do not do that. I have been in my local sainsburys (closer than corner shop) if I run out of milk and queues are always down the aisles.

As for going into tesco on xmas eve on a sunday how stupid. Could of done your shopping on saturday when contracted staff were in. You do realise people don't have to work sundays don't you.!!
03/02/07 nathan
-7

Supermarkets exist because they fit in with the new 24hr culture. Years ago you went to the butcher one day, the baker the next day etc. Now you can do all your shopping in 30 minutes and you don't have to pay for the car park either. As our country moves in to the 24hr culture people want to do their shopping in the quickest and easiest way - supermarkets. I'm not defending them because they have a negative side as well but they are certainly easier than going into the town centre. As for the comments on supermarket goods being fresher, dream on. Ever noticed how quickly your fruit goes off when you buy it from a supermarket? This is because it is picked about 3 weeks previously and then kept chilled. Similarly with meat, it sits in a warehouse for weeks before getting on to the shelves. I speak from experience because I worked in logistics for Tesco for 10 years. Its true what is said, if you knew what went on behind the scenes you wouldn't buy it. We would get loads of fresh goods sent back from stores because it arrived at the store out of temperature (chilled goods have to be transported chilled). It would sit in the lorry back at out depot while the fridge on the lorry was fixed and then sent out again. Some stores are 6 hours away, work it out - 6hours+6hours+however long it stays at the depot. If only you knew!!!
22/01/07 simex
-1