I needed to buy a few items this morning including a bottle of wine and as I needed to have it cleared by a staff member I decided to use a regular checkout instead of the self-serve machines.

There were two people in the queue already.  One was a man in his early 50s who was evidently nearly finished and there was just one woman after him.  It seemed like an easy choice to go to this till..  This guy looked like one of those typical "nothing to do" anorak types.  He paid but made no attempt to clear the packing area for the next customer.

The woman's shopping was sliding down into his shopping and she was trying to juggle her items and bags in the roughly half space that was left to her.  She appeared to be annoyed by this but was polite enough not to say anything.  Finally, she got her shopping together and left.  As I was the next customer I stepped up to the woman at the till and said "Good Morning".  Anyway, this guy is still there dithering, moving his shopping about putting things in and out of the bags.  I stood there for a few moments waiting for him to finish, but it seemed he was in absolutely no rush to go anywhere.

I said to him "Are you planning on moving anytime today?"

I said to him "Are you planning on moving anytime today?"  His response is not one of an apology for holding people up.  "What's the problem, I'm not in the way" he said.  "Yeah you are, I want to get my stuff packed" I replied. 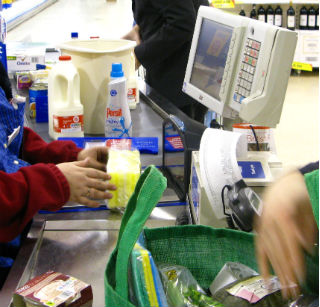 As this conversation was occurring the woman on the till jumped out of her seat like she'd been shot out of a cannon and it turned out she had run off to get security.  I was quite surprised at that because the guy had responded in a way that seemed quite antagonistic, but not overtly aggressive.  Anyway, he finally shuffled off with his shopping and I patiently waited for the cashier to return.

She returned with a security guard and I told them there was no problem, nothing to get worked up about.  She then pointed at me and said "This man has been very, very rude to another customer".  At that point the security monkey told me "We cannot serve abusive customers".  Now I am absolutely amazed at at this response, but but know that there is absolutely no point in trying to argue the point with this kind of person.  I looked at the woman cashier and and asked her "Do you not think you are overreacting slightly?", to which her response was "He was just an old man..."

He wasn't an OLD man, he was only a few years older than me!  To me it seems indicative of this attitude that any king of expression of frustration is labelled as abuse.  I was pretty shocked to be honest and will certainly not be spending my money in that establishment again!

Laser - what annoys me are customers who push you out of the way and rush you when you are going as quick as you can. If you did that to me, you will surely end up more pushed for time by the end of it. :)
31/03/15 Mushy
0

The problem seems to be that some people are unable to talk and work in tandem. I don't
mind the checkout operator being a bit friendly, but carry on moving the items at the same time!
13/02/14 collar
-1

I always seem to get stuck behind someone who couldn`t move slower if they tried, & some of them look as if they shouldn`t be let out without a keeper!
13/02/14 hairyfairy
1

In most supermarkets the checkout operator will not start putting the next customers purchasers through until the previous customer has packed all their shopping away, so that the two lots of shopping do not get mixed up. If a customer is being too slow the operator usually helps by quickly "stuffing" some items into a bag for them.
12/05/13 Bens nonna
-2

I usually huff and chuff impatiently keep looking at my watch, waft my works pass around and start a conversation with the checkout girl at having to get back to work some time this millennium. Then give a quick glare at the All Dayer.
03/05/13 JanieQ66
-11

The way I get round people taking ages to pack thier shopping is to hit them, not too hard but to snap them into life. Like a slight punch on the arm or gentle kick in the shin...it does work but the checkout girl gets full of black looks. Once the manager was called at sainsburys and I said she imagined it and that was that. Best way now is shout come on! a few times and they soon scarper. yeah ok still get the black looks buit I'm outa there faster.
27/03/13 laser rifle
-4

I absolutely agree that you should have said something, folk who dither about are the ones who are usually oblivious as to what's going on around them. I work full time with a fifteen mins walk each way into my town centre, which gives me half an hour max to get my jobs done. It winds me up when I get these so called All Dayers (people who have no job to go to and all the time in the world) dithering about at lunch time, when they can quite easily avoid the time between 12.00 to 2.00pm giving us ones with very little time to get jobs done.
26/03/13 JanieQ66
-9

Feel your pain Ken, women can be indecisive at the best of times and when they're in gossip mode if they're out together then there's no stopping them.
21/03/13 Jay T
0

My father and I disagree on this constantly. I'm always telling him that it's rude to take his time while other customers are waiting to go through the lane; he's always telling me they can wait and don't need to be in such a hurry.
Also, the way you described him moving stuff about in the bags, made it sound to me like he's one of those people that feels like they never pack his stuff right. Sounds like he was really annoying. Either way, right or wrong, we're not really supposed to tell people when they're being annoying if we don't know them too well.
08/03/13 michelle
7

If the supermarket wants the check out queue to move faster, they should assist in packing customers' shopping. If their customers are frustrated they should employ more check out operators.

Sorry to be devils advocate here and put myself in the mans shoes.

Being impatient gets you nowhere as you have seen. If I was packing slowly and was then confronted with a sarcastic comment that you made, I would have been hugely embarrassed. As mentioned in the comments, it would have been better to be more polite and either just wait or offer some help (the cashier should have offered help too). This man could have been ill or was just ensure the bags were of a weight that could be easily carried.
09/02/13 DW
0

Shall we Dance baggy pants

This made me laugh of course there are some people who dither and go about tasks like a snail pace but we have to learn to tolerate and zip our mouths, otherwise we will end up in trouble like this poster....
30/01/13 Shall we Dance baggy pants
1

don`t get me started on dithering shoppers! Usually it`s some batty old lady who thinks that the checkout assistant is there just to listen to their dreary waffling on about their grandchildren. They stand there yacking away while the queue behind them gets longer & longer, then they take ages fumbling around looking for their purses, either that or they can`t figure out how to pay with their credit card. They should have special checkouts for these people, with a sign saying "timewasters"!
29/01/13 hairyfairy
5

firstly I think you should've had some patience with the guy, maybe he had some sort of illness that meant he moved slowly.
Secondly the cashier shouldn't have started running the next shoppers goods through until the shopper before had packed his shopping away and even dare I say offered to help if he was clearly struggling or maybe you could have helped if it would've helped you move along too. But then again we seem to live in a world of self self self nowadays and nobody has time for anyone else.
Thirdly your openiing line to him was very sarcastic therfore i'm not surprised the cashier viewed you as rude but I do think it was over the top to fetch security and as I wasn't there to witness the incident then I can't judge how aggressive your manner may or may not have been.

Patience is a virtue and there seems to be precious little of it these days.
29/01/13 fesantplucka
-1