If you buy your shopping at Tesco in Bedworth and you're one of the people I'm talking about, have some consideration for others for goodness sake.

We all like to get a bargain now and again, and when I say all, the important bit is ALL of us, not just YOU greedy selfish scavengers!  Most of you probably know this already, but later on in the day many of the big supermarkets start reducing produce that is close to its 'sell by' date and in the early evening the discount is quite considerable.  Some foods such as fruit, vegetables and bread are reduced by up to 90% - which is great if you can find something before these 'locusts' have come in and snapped up the lot.

I have no problem with people going after a bargain, but when you take everything in sight whether or not you need, that, to my mind that is just abhorrent and there's absolutely no call for it.  Seriously, what ARE you going to do with 5 cooked chickens?  I don't for a minute believe that you have a family that big, more likely you are going to feed them to your dogs - which is extremely selfish indeed.  You couldn't just take one, or even two could you?  You have to deny 4 people a nice dinner because you want it all... you selfish pig!  I actually saw this same person on another occasion with a basket FULL of cartons of strawberries (10p each I think they were).  Is he going to eat them all before they go off or is he intending to make a hell of a lot of jam! 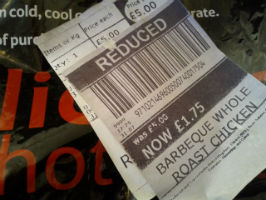 The same half a dozen people hang out there every night and it's not a case of them swinging by after work to pick up a few bits and pieces as I do.  Some days I'm there on a Tuesday or Thursday, some days it's a Wednesday, but no matter what day I'm there I'll practically always see them and they're always in the same place waiting for the staff at Tesco to bring out the reductions.

When that poor Tesco employee brings along the trolley you should see the frightened look on their face as they are almost immediately engulfed with arms and legs everywhere, people snatching what they can and practically fighting over the packages until they're all gone.  It's quite embarrassing and if you're too polite (I guess I am) then all you get to see are empty shelves.  As for three Indian women who can be found camped out in the corner where the fruit and veg reductions are taken.  Well...  you don't stand a chance there because there's and army of little helpers (children) who make sure that you can't get near anything until they've picked it clean.

It's just disgusting behaviour in my opinion and it's very unfair to everyone else who shops there, myself included.  I wish the staff at Tesco Bedworth could do something about it but I suspect they are pretty powerless to act.  You can only vary the time that all this happens by so much and it probably wouldn't do any good because the scavengers will just hang around regardless.  Perhaps a limit on the quantity of individual items would be a good solution, although I don't know how they'd enforce it.  Well at least I managed to get a bargain for dinner this evening in the form of a cooked chicken.  Presumably left behind because they couldn't read the label as it was upside down - no doubt knocked over in the scrum!

These scavengers should be made to wait in line o, instead of causing log-jams. More queues than ever are breaking down. Perhaps it all stems from all the leftover food that one cannot possibly eat, that one already has eaten on one greedy day.

All the food in you're pantry you have to eat: expensive biscuits, a bigger box of chocolates than ever before, a tea twice the size of a normal one, meat and chickens etc. etc.. Where is this waste all going to? not in our bellies! You can't take it with you, you see.
14/04/14 collar
2

I went into a Poundland shop for some chocs. Two Asian women had each filled two baskets with ALL of the type I wanted. The assistant had gone to the stockroom, she came back and said there were no more in stock. They COULDN'T have wanted all those for their own consumption, or even a party; they were obviously selling them on at a profit.
14/04/14 Fed-Up
1

I never shop because my housekeeper does it all for me.

Is it really that bad, I will ask her next time she comes around.

Having said that one should not have to suffer meeting you guys in public.
28/03/14 Bulldog
0

Nick, I've seen people do that too! I thought I was just seeing a few isolated cases! It's a cunning yet dirty trick. Had some new travellers move into my area lately and they tried that crap at my store. Also one of my braindead minions left a roll of %50 off stickers lying around of the shop floor, and you can guess how many customers got their dirty little fingers on those babies, trying to stick them on vodka, champagne, Gannon joints and the like.
28/03/14 pet
0

EU people will take the 25 pence yellow label off a reduced pot of yoghurt and stick it onto an Angus beef fillet steak before going to checkout.
03/02/14 Nick
0

I used to work for TESCO in Twickenham (10 years) and New Malden (2 years). When it came to putting out the reductions, a lot of the time I used to rush to avoid getting squashed by loads of customers! It was like feeding time at the zoo!!! Some times, customers would take items off of me (my arms were full at the time, and would be almost empty when I got to the reduction isle), other times I'd be 'almost' pinned to the reduction shelve while having several hands grabbing items and voices asking me: "Will you be reducing anything else?" I was always glad to get back behind the Deli, meat and fish counters. Shudders at the memory!
30/01/14 Des
1

HAS anyone else found it frustrating to return unwanted goods , I bought a garment on line and although its my usual size. this one is very generous , I gave up all thoughts of returning it ,when i discovered the palaver needed , first you must have a printer, to print your own label bla,,bla ,bla i can,t return it to one of thier stores , i need a printed label for that , i wouldn.t have bought it on line if Iwas neer a store BAH
16/08/13 NELL
0

I used to work in a supermarket ,,, you get so you dislike people , I'VE WATCHED THEM , THE SAME ONES EVERY TIME EVERY DAY , I know that some of them deliberately damaged the tins to get them reduced, swopped the lids on coffee jars . everyone likes the odd bargain ,, but this is sheer greed,
14/08/13 nell
2

He's a paying customer, just like yourself and may have a medical reason to take his time. Honestly, do the three minutes really make such a difference in your life? Like these people that overtake you while you are sticking to the speed limit, glare at you and go tearing down the road only to meet up with you again and the next red traffic light. Slow down and breathe.
27/04/13 meagain
3