People are really like sheep aren't they'  I mean they will literally follow everyone else and not think for themselves.  "I've got to have an iPod mommy, because everyone else has one and I've got to buy my music on iTunes too because otherwise I'll be a freak and Jayne and Timmy won't talk to me anymore!"

You buy your 32" Sony widescreen television screens from (insert high street store of your choice), you subscribe to sky, the BBC and whatever else next door are in to.  You have to make sure you've bought your house, where's the best place to buy a house, send Jimmy to Montessori so he can grow up and be a good little consumer like mommy (stay at home breeder and Betterware rep) and daddy (works a boring 9 to 5 and doesn't care as long as he can play around without the missus finding out).

You have a PC bought at Time or PC world and it's got Windows or Linux or Apple doo da operating system of the month on it.  Who cares, you're buying the stuff and still doing it because someone says you have to!  You've got to install the latest software and get the latest upgrades, because you're told to.

You've got to shop at the designer stores, no actually scrub that; you've got to buy your clothes at Oxfam and Help the Aged, because that's the latest cool thing to do.  Yes, every one else is doing that now aren't they.  Don't forget to recycle and take your clothes to the clothes bank, that way they'll be ready for the next batch of sheep in some third world country! 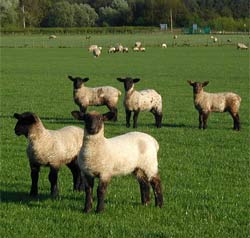 You can't think for yourselves...

You buy the latest consumer gadgets, because your friends and people you touch every day make you feel you HAVE to.  You don't want to stand out in the crowd now do you?  You beat out the same worthless existence and worship the same crap religion everyone in your section of toy town do, probably because you don't know any different and why would you?

No, it's plain and simple.  People are just sheep and they're pretty stupid sheep as it happens.  You do what you are told and you do it when you are told, end of story.  You can't think for yourselves and you don't even realise that you've got a choice.

You believe everything that you see and hear and you no longer question the source.  Even the wide availability of that classic movie Nineteen Eighty Four and the message it carries is completely lost on you.

What is breath taking is, they didn't even check to see if the tide was in or out. Now the NHS will have to treat these brain deads. Durdel door rules.
31/05/20 Guest
1

if Covid doesn't get them, their own stupidity will. must be BMW/Audi/merc mentality.
31/05/20 Jethro
0

Sheep?...People who accept the status quo without thinking for themselves. They dress the way they do because they are shit scared of individuality. They believe the bullshit that is fed to them 24/7...I mean Sandra, they know whats best for us don't they because they have important jobs! (yeah)
They tell us to walk off the edge of a cliff? well it must be right because Mr & Mrs Gusset at No. 46 did...and they've just got a new Strange Rover!
26/05/20 Mash
0

I am in the frame of mind I don't give a monkeys what people think of me I wear what I want and own what I like I am not that bothered about gadgets I have a dvd player a t.v i have games consoles but they are old ones and I bought my mobile for Â£1 from a charity shop. I see people buying all the latest clothes and gadgets why spend Â£50+ on a pair of jeans go to asda you can get 10 pairs for that price they may not look as nice but does the job
22/10/14 Cheapo
1

Yeah and you also see a good example in school-run mums waiting outside the school gate - the most stupid, nosy, gossiping and snobbish bunch of cwnts I've seen all my life.
24/02/14 Nick
12

The majority are brought up to 'fit in', the parents blindly send them to school without even questioning whether they have to. The kids are brought clothes and games to fit in with all the other kids, well, afterall, you don't want your kids being the 'odd one out'. Children are not brought up as unique individuals, with gifts and talents. Individuality and independent thought are not encouraged and that continues all through the person's life.

The brainwashing and state/media manipulation runs very deep. No where in history have we had access to information on all sorts of subjects, so there should be NO EXCUSE for people still being asleep, but they are, it is truly mind boggling.

The saying about celebrating your uniqueness and not be a copy of someone else, is very true. If you are forever going about your life 'trying to fit in', then you are wasting your unique and amazing life. It can be hard and many people who have gone against the grain have not had an easy time of it, but, it is set up that way.

The very best thing ANYONE can do is to get rid of the tell-lie-vision, not to read any form of 'news' mainstream AND 'alternative', and to question EVERYTHING, and not blindly go with what others say you should do, and start devoting your time to how your can improve your life, instead of being distracted all the time by what society says you should do.
21/02/14 Babs
2

People are sheep? Well, what do expect when a great many live on a diet of TV soaps, celebrity mania and junk food?

In one of my short stories, penned in the 1970s, the principal character witnessed his society turning into the mass hypnosis that exists today - especially in Britain and America. People have been and still are being dumbed down. One only needs to look at the fact that they vote for politicians and parties that voice platitudes and almost never keep their electoral promises.

I regret to say that in my view all these people should live underground on the moon or exist on a different habitable planet where excesses of mediocrity reign. For the others, some form of trustworthy oligarchy might do, or a democracy with proportional representation.
23/09/13 Teutonic Knight
4

Well, people are supposed to work and live like sheep in this 'modern' corporate world aren't they? This is unless you are one of the top 0.001% tycoons or member of a powerful family in which case you can choose to live your life as you wish - maybe sipping champagne on a yacht or something?
23/09/13 Nicky
0

hmmm I agree that most people are sheep but this a poor example of that in every way. None of these examples really apply. Of course if I'm going to have a computer it will have to have some sort of operating system. No one told me to, it just comes that way. Donating old clothes is probably an example of a positive thing to come out of people mindlessly doing what they're told. I don't know. I agree people need to learn better critical thinking skills for themselves, but using those same skills to value this rant I find it lacking good substance.
16/04/12 Satiada
-4

You may be unique but I guess you don't get the overall picture. Not everyone is as much a sheep as the next guy. Yet we are still all sheep. We still learn from others, and follow others, at some point if not now. You may be unique but unless you actually do something unique you are just another.
24/05/11 Thetruth
-3

The Truth
Why must I be a sheep? Why can’t I be a fly? Or a cow? Or a buffalo? or a Jehovah’s Witness? or a Freemason? or just a form of life that does not have any answers and is not prepared to guess. Actually when I think of it, I could have been a buff, they asked me in the local club whether I believed in my queen & country? I answered, I believe most deeply & sincerely in my country but the queen can look after herself.
Thus I still must be signed in as a guest. But I am the unique “me”
22/05/11 Boblet
-11

We will or we have been sheep at some point in our lives. For those who disagree with that point humans are sheep from birth. You imitate everything you see. That's how we learn. We copy each other. Now when you get older you start to become more intelligent, grow up. But more than likely you will do what the majority does as they get older. 1. Get married. 2. Practice a religion. 3. Follow what others tell you to do. In order to free yourself from this you must be open minded. But you will never be free. People tell themselves an awful lot; "I'm different from others. I'm myself, an individual." Not really. Even the writer of this article is a sheep. His experience in this study proves it. Even I'm a sheep. I'll say that I personally think and believe I'm free. Yet at the same time I know I'm in chains. I try to isolate myself from certain groups of sheep. My definition of 'People are sheep' is this; All people are sheep. Being a sheep is mimicking others, which is how humans learn. You obey others because that is what you are taught. You fear because it is part of being a human. Only those who achieve the highest possible power can severe the daemonic bonds. Seek the truth, think for yourself. But most importantly remember you are the most important person to you.
22/05/11 Thetruth
-20

These are some of the things I find annoying