Tesco used to significantly reduce the prices of items that were close to their sell-by date, but these days it's hardly worth the bother looking in the reduced section and hunting for those yellow stickers.  They're no longer the bargain they once were.

I have also noticed that they seem to reduce the price of goods a lot earlier than they used to, sometimes several days or even a week before the sell-by date.  I think the price reduction is really stingy though and even on the last day, they rarely drop the price enough to make it worthwhile.

I'm on a pretty low income as I am self employed so I need to buy the reduced stuff and the Tesco Value products most of the time.  It used to be the case that you could find items that were reduced to nearly one third of the original price.  Bargains such as these would be snapped up rapidly and you'd be in a race with the pensioners and single mothers to get there first.  I usually lost though because they're canny creatures and know how to use their elbows!  Okay, maybe I exaggerate but the shelves were generally emptied as soon as the reduced items appeared because they were REALLY reduced. 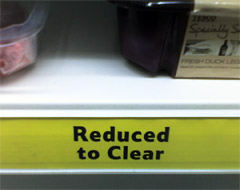 lucky enough to find something with a third off...

Now when I go to our local Tesco the reduced counter is always pretty full and there are plenty of yellow stickers, but a few pence off here and isn't much of an incentive to walk past Iceland now is it?  If rummage around enough you might be lucky enough to find something with a third off.  But that's about as good as it gets!

Come on Tesco; let's have some real price reductions because you know, every little helps!

You cannot trust a Tesco price reduction claim is proper value. While visiting Grimsby store i looked for present for Grandson noticed Sony Wireless stereo headset WH-CH500, reduced by Â£20 from Â£60 to Â£40 bought it Problem is it cheaper in Currys, AO PC world and all other stores sell it at a lower price without a reduction Conned

Disagree with the lack of reductions but there is an issue with those who bring the whole family or use trolleys to block others getting to the goodies. Even worse are those who stand elbow to elbow pressurising the poor sod who's reducing the prices.
I find this a great way to taste food that otherwise I would not take a gamble on and now buy salt n pepper tiger loaf though I did prefer the cheese topped one they seem to have stopped making. Also tried celeriac rosti ...... yuk never again but the celeriac was 10p and I know I will never buy it again.
Last Christmas in Waitrose they reduced the price of Turkey by half, still a bit too much for my pocket but I splashed out and we had a memorable Christmas dinner and several other meals. I wrote to Waitrose and thanked them. They have no idea what that turkey meant to me.
25/07/18 Boabie
-1

Doreen from the Drs

Don't forget the people sticking yellow labels onto products often have got straight 'F's in their GCSE maths that's why they're wound up in there.
28/05/13 Dave
-6

May I suggest Aldi or Lidle if you have one of their stores near you. Quality is as high if not higher than the arrogant large supermarket chains Tesco and Sainsbury for a start. Good choices and excellent savings to be made.
29/01/13 Fedup
-2

What really grinds my gears..My local Tesco in HULL often announce over the tannoy ( ladies & gentlemen I would like to announce that we have reduced priced cooked chickens at the deli counter and a selection of cakes and bread. THANKS FOR SHOPPING AT TESCO).

I'm disgusted at the large and obese scavengers who I've seen RUN to get their fix practically fighting over a ?2 cooked chicken or 3 blocking the aisle with a shopping trolley and their body mass. Filling a basket or shopping trolley to the brim.. That's just being more than greedy, and they wonder why they are fat.

On one occasion I heard one fat women say hurry up donna before the skinny lads get em.. Ha ha ha.

Besides Tesco. Our local food bank (feeding low income families with donated food) I'm just gob-smacked at how many fat people go there? Obviously not under-fed how are these salad dodgeing chair moisener's allowed to claim free food?

Sorry I dont have a grudge against fat people but for crying out loud DON'T BE SO SELFISH AND GREEDY, and get to weightwatchers, get a job and work it off!
12/01/13 Homer J Simpson
0

I do the reductions in the tesco store that I work in I can tell you for a fact that we still reduce things right down, the 'final' reductions' get done at 7pm and this usually knocks about 80-90% off depending how many products are left, and then when I'm checking the rest of the store for tomorrow's reductions anything that was missed the day before gets knocked right down to 90-95% it's all about the customers timing to grab the bargains while they are there. The only thing that doesn't get knocked right down anymore is the instore bakery but this is at a store level rather than a national level and is done to ensure we bake the correct quantities during the day. The bottle of wine mentioned below sounds like the reduced bottle was reduced when the normal bottle of wine was a higher price and then some days/weeks later the normal wine comes down in price also.
09/03/11 Owen
-3

Why can`t supermarkets colour code their economy ranges. I have recently bought some own brand vitamins from ASDA, & when I opened them, I found that they were the wrong ones. The trouble is that they all look alike, such as tinned beans look identical to, say tomatoes, & I have ended up opening a can of these when I wanted beans. Of course once I`ve opened them, I can`t take them back, so I have to eat them or throw them away if I don`t like them. I must be very bad for people who are visually impaired, or semi-literate.
01/11/10 hairyfairy
-15

The smelliest toilets in a shopping centre that I have ever come across are the main ones in the Tamworth shopping centre, my wife imformed me that the ladies were unusable because of the smell, and she said she would wait until we got home, an hours drive away,

What sort of brain dead person is the manager of this centre to not notice this terrible smell? why havn't the shop managers complained? the stench was unbearable.
15/06/10 Gainsborough lad.
-38

If Tesco has too many yellow labels - the stock contol manager is not keeping an eye on stock. Come on customers - Are you gonna control the stock ?
16/05/10 ocset
9

I wanted leeks for soup, and picked up a 500g bag of Tesco "Value" leeks. The price per kilo was Â£1.68. Then, I noted that loose, "not Value" leeks were only Â£1.15 per kilo. Duh!! I queried it online with their Customer Services, and had a phone call from some poor soul who'd clearly been told to deal with me as a training exercise. To me, the matter was obvious - Tesco appear to be scamming their customers who want to purchase products from their Value range. Silly me! Because the leeks in the pre-packed Value range are smaller, apparently you get more for your money! That is exactly what the guy said. I told him that to me, 500g of leeks is 500g of leeks, whether they are large ones or small ones. No, I was wrong again, of course. "People like to have more leeks in the pack" he said. And I added, under my breath "because they think they are getting more". Every little helps Tesco, and not the customer, in my personal opinion.
09/04/10 Outraged
1

Tesco, Unilever and the Marmite row