I dread going shopping at the big supermarkets such as Tesco where they don’t operate a deposit system.  You know the one where you have to pay a £1 to use the trolley.  Sometimes you need to go and buy a token but the idea is still the same.

You might be asking yourself, why is it such an issue for me?  Well, it’s the lazy gits who don’t put their trolleys back that cause me to loose my temper.

How many trolley scratches has your car received recently because of some idiot just leaving their trolley in the car park?  This is a real problem when it’s a windy day or there is a slope.  It basically means the thing is just free to just bounce from car to car wherever the wind or gradient may take it. 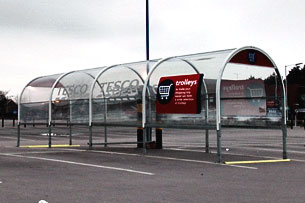 It’s just selfish and irresponsible behaviour leaving them there like that.  For goodness sake just take it back and park it in the bay where it’s supposed to be left!

There’s another thing that the deposit system could help to put a stop to.  People who steal supermarket trolleys and then dump them in the street or in a nearby river.  How many times have we seen that?  I’m sure they’d soon quit if it cost a pound every time they wanted to push their drunken mates up the road in one.

The original poster is not blaming the staff but the lazy so and so's who do not return their trolley tidily. I think it is unfair to pursue some daft sod of an employee, who is on minimum wage.
07/08/14 marmalade
0

Right, if the store employee someone to move trolleys and your car has been it. Ask to speak to the manager and advise a trolley has hit your car, he will say sorry vehicle left at owners own risk and they dont take responsability for it. You then say ok, I need the name of your employee who usually collects the trolleys so I can pursue him for the cists as he is not doing his job correctly, neglect of duty, and you employe him or her, then wait and see what the manager says
07/08/14 moy
0

Tony Robinson hosts a TV programme “Worst Jobs in History” trolley man. Your job will appear in a few years time, you have my sympathy having to deal with the most selfish of society, the shopper. In Bradistan they have built a Tesco's on the side of a steep hill so steering a fully trolly across the inclined car park can only be accomplished by the strong. The Tesco architects & Bradistan planners, must have been a right bunch of twerps.
29/09/13 boblet
-4

I work for Tesco on trollys and we have cars hit by trollys all the time due to the non to the bays provided, and its everyone from young to old. owners of cars and non owners, the owners of cars are just LAZY and the non car drivers hate the drivers. Then you have Parent and Child parking who always say i cant leave my poor children in a locked car for less than a minute excuse but also forget how they managed to get the trolly when they arrived. Parent and child is also for the Lazy no children squad BMW MERC 4x4s who seem to think that what they drive gives them the right to park where they want. Tesco then put the £1 coin/token system on all trollys which had an amazing effect instantly hardly any cars hit or strays anywhere it was all great for 6 months then they took the coin system off because CUSTOMERS
did not like it, same day they took the system off 1 trolly managed to travel 5 miles
as we had to collect it.
29/09/13 off my Trollyman
1

Where we live the local tesco has a pedestrian access (pavement), which is owned by Tesco, alongside the carpark, this is always blocked by idiots dumping their trolley on it so we have to step onto the carpark area to get by, and then to add insult to injury we have to put up with gestures and comments from car drivers because we are on THEIR territory.

i work for tesco on trolleys.
and i am sick to depth of the few people who just leave trolleys where they are parked because they are to lazy to put them in the in the bays provided.
on windy days they can reach speeds around 20 m.p.h.
which can cause a lot of damage to cars or injure people.
i wear a high vis vest but am invisible to motorist and customers as they exit the store they see me but still walk straight in front of me with the attitude that i am in the way and i shouldent be there.
at the end of the day I AM DOING A JOB when i let go of the go button on the remote the kart stops but the trolleys will still travel 6ft.we work in all weathers sun/rain/wind/snow/hailstone/ just so all you lovely shoppers have trolleys at the front of the store - god forbit your whinging if you had to walk to a trolley bay to get a trolley.
so a little bit of RESPECT for what we do would be most APPRECIATED in stead of abuse and arrogance. thankyou. :ALL CUSTOMERS SHOULD HAVE A GO AT MY JOB THEN YOU MIGHT JUST APPRECIATE JUST HOW DIFFICULT AND STRESSFUL IT CAN BE ESPECIALLY AT EASTER AND CHRISTMAS OR BANK HOLIDAYS WHEN PEOPLE PANIC BUY.
28/08/12 trolleyman
3

I went out this morning to discover some fart-wit had dumped a B&Q trolley outside my gate. Rang the local police only to be told they don't deal with shopping trolleys, its a council issue. Rang the council to be told they dont deal with missing trolleys and if B&Q wants it back, they get it themselves. B&Q said they can retrieve it only when they are in the area, and could I leave it outside in the street for them to collect in the next few days? Errm NO. I leave it outside and the local chavs have a field day before leaving it on the dashboard of some poor sods car via the windscreen.
19/04/11 Sick of chav-infested Britain
32

Most if not all trolley return bays have a little bump (like a small speed ramp) at the edge to stop trolleys escaping, should they work free from the 'stack' of other trolleys. It doesn't take much to ensure the rear wheels are fully in the trolley bay before going back to one's car.
06/02/11 John
-108

The reason why car drivers abandon their trolleys, cos, as far as ther concerned, they have finished with them.
Once they let go of it, its not their responsiility anymore.

You forgot to mention those tools who leave their trolley right in the middle of one the few remaining parking spots in the car park. You have to stop and get out to remove the thing before you can park in the bay.
08/09/10 Biscuitbum
58

People like you whine when I make sure my trolleys are left away from the bin where they can't roll into your parked cars.

People like you whine when I make sure my trolleys are left in the bin, only to roll into your parked cars.

If you put your trolley back then watch it roll away - people will whine. get used to it.
It is our responsibility as considerate and sensible shoppers to manage our trolley from start to end. If the trolley doesn't fit in the bay, it is your duty to your fellow shoppers and parkers to find a safe place where it will stay. If you don't bother, who will?
Wake up plonkers, and stop blaming the tools or someone else.
09/07/10 zaichornok.
-81

I can't stand when people whine that I don't leave my trolley in the trolley return.

These trolley returns cannot hold the trolleys properly! Every time I drop one off, no matter how secure it is placed in the gate, it always comes rolling out One time I had a trolley escape from the bin, it sped all the way across the parking lot and hit somebody's car.

These things are unreliable. Besides, the workers would save so much time collecting these trolleys next to the front door, instead of all the way across the parking lot.
09/07/10 Bobby Powell
58

Yep. I've seen that too. People are so selfish. They should fine the drivers, and the trolley abanoneers along with the plonkers who can't use the self service checkouts inside. People only seem to understand money - nothing else - so fine them.
09/07/10 zaichornok.
-45