Our local Tesco used to have Haggis and it could usually be found alongside the sausages, black pudding and bacon etc.  However, since the old store was torn down and they rebuilt a brand new Tesco Extra few months ago they no longer have any.  I should probably point out that I now live in the heart of England which means that it's not exactly practical to nip over the border and catch one whenever I feel the urge to have a spontaneous Burns Supper!

I'll give credit to Tesco where it is due though, because it has been quite difficult to buy Haggis down here over the years and more often than not I used to bring a few extra back and stick them in the freezer so I'd always have some when whenever I wanted.  I know you can buy it at some butchers, but the ones that do it aren't all that common.  I discovered that Tesco had them in stock a few years ago and they were usually pretty reasonably priced and fairly authentic, so my suitcase on a return trip to Scotland didn't bulge quite as much as it used to, and for this I am grateful.

Come on Tesco, make space for some Haggis!

Now back to the Tesco in the town where I live now.  As I said, they used to have Haggis but since the rebuild they no longer have a space on the shelve for it and it is nowhere to be seen.  I'm not sure if this applies to other stores or if it is just ours, but I know for a fact there's a fairly large population of Scots in our town and the Haggis used to sell very well all year round. 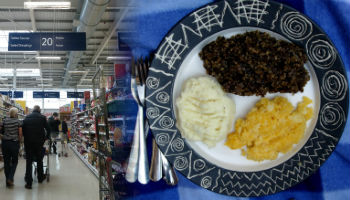 'Okay, so they don't have it any more so move on..' you may well be thinking.  Well the reason this irks me so much, and the reason for posting this gripe is that whilst they no longer appear to have room for a well known Scottish delicacy, they have no problem dedicating an entire isle to Polish and Asian foodstuffs in the news store!  I've seen the odd person walk down and have a curious look, but I've never seen anyone actually pick anything up in the Polish section.

Come on Tesco, Scotland is only a few hundred miles away.  Is it too much to ask to shove a few of your premium sausages out the way and make space for some Haggis?

Haggis is an endangered species, just like being British is
13/11/15 Haggis Hurler
-2

Its basically s**t in a bag, why do you think they stopped.

The good news this week is if Scotland votes to leave the UK, and if Tesco's sells Haggis in Scotland it will be more expensive. Something to do with the Welsh, Irish and English no long funding cheaper food North of the boarder.

I do not know why on earth anyone would want to eat this vile concoction. I always thought haggis was the horrid bits of a sheep's insides, mixed with nasty porridge and stuffed into the sheep's hollowed-out scrotal sac.
17/12/12 jobbie
-13

Good luck finding anything you want in Tesco. The Bognor store has been laid out by retards. Tesco hide, move and remove stuff so you spend more time looking in the hope you will buy more stuff that you didn't come in for. We have haggis. but we can't guarantee where it will be. I had a coupon for Spam, So I looked for the fritters. It ran out nearly a year ago and I still haven't found where they have been hidden.
Thank God we have a Morrison's, Lidl and Sainsbury's. I spent Â£31 in Sainbury's this afternoon. I may of saved a Â£1 by going to Tesco but I was not prepared to waste my time wandering around a junk-shop.
16/12/12 HappybunnyNOT
-8

rc, I think you would find that your opinions would carry more weight and be more respected if you would write your comments in intelligible English. Then the rest of us could actually read them and understand you without being forced to make the effort to translate them first.
06/11/12 grumpyoldwoman
-5

Its obvious why they dint sell haggis anymore,who the he'll could eat it,,it looks and sounds horrible,,i always thayght itcontained sheep pooh and sawdust,it was invented by greedy mean Scottish people so ages ago when they didnt have anything too eat, they used to march to London for a chip butty
06/11/12 rc
-21

"Not to mention banking & insurance. I wouldn't go into Lloyd's for a pint of milk or ask the Man from the Pru (if he still existed) to bring me a loaf of bread."

Totally agree. Not so long ago they have decided to "sell" tyres as well! (I believe they're actually a reseller but that's beside the point).

The endless and rapacious greed of these large corporates knows no bounds or morals. It's very worrying.
26/10/12 Oi
-7

Not to mention banking & insurance. I wouldn't go into Lloyd's for a pint of milk or ask the Man from the Pru (if he still existed) to bring me a loaf of bread.

At least I have a local butcher and farm shop; I buy all my meat in the butcher's and most of my fruit & veg in the farm shop.

The reason Tesco do not sell haggis anymore is that they are too busy selling goods that should never have been sold in a supermarket.... TV's, DVD's, washing machines, clothes, to name a few.... food was not enough for them.... they want everyone elses business...

Tesco will not be happy until every other shop is out of business - they are killing and have killed many high streets and small businesses in particular - in my town there are now 28, yes 28, shops empty on the high street, no more independent butcher, cake shop, or even a Spar!! but at least, the bigger they are, the harder they fall, and Tesco's day will come!!
26/10/12 Tesco Hater
-9

DPD, so you applaud the decisions made by Tesco which have forced me to buy half my groceries at Sainsbury then?
25/10/12 grumpyoldwoman
2

I quite like haggis, a couple of times a year, but, I suspect that I am in a minority.

Perhaps that is why nearly all the haggae I have ever eaten have been passed sell by date reduced by 90% of their marked price. As a Tesco shareholder therefore I applaud their decision not to stock loss making lines. Might I suggest that you shop for your haggis elsewhere, perhaps Waitrose or Fortnims.

Fed up, you are so right! Unfortunately not enough of us are prepared to pay a bit extra for more choice.

Price is more important than choice or quality these days, even though we spend a much smaller percentage of our income on food than our parents and grandparents did.
25/10/12 grumpyoldwoman
-13

I agree our Tesco has a large aisle full of Polish, Asian etc food and most of the shop floor staff do not speak a word of English. Hey that's Tesco for you, they only care about the money. They want to mold all their customers to shop as Tesco wants rather than offering products we, the locals, want, enjoy or need.
25/10/12 Fed up
-11

Just in from the "Black Greyhound” brawn over a pile of chips is a favourite of mine jobby but I do not recommend it health wise. Tripe is the same taste as cockles, it has none, all you taste is the vinegar.
24/10/12 boblet
-14