I've been married for only two years, I'm 34 years old and my wife is 31.  We have been together for a total of 5 years.  Up untill eight months ago everything was just normal compassionate sex, caring thoughts etc., just plain enjoying our life.  She then started to find fault with relationship when there was nothing wrong.  She would say "things just don't seem right" and she wouldn't explain any further.

I thought she was just going through a phase so I let it slide, but about two months ago I noticed she was receiving lots of text messages from "work".  At the same time I also noticed that our cell phone bill had sky-rocketed and when I examined the bill closer, I discovered that she was texting 600-800 times a month and all to the same "work" person.

The next time she received one at night I looked at the phone and the text message said "Alright".  I then looked at what she sent in her text and it said "Enjoy bowling, think about me a little".  Another message said "make sure to delete all your messages".  So I asked her directly what was going on and if she was having an affair (without showing her the phone of course).  I said "Is there anything going on between you and this person?".  She said "No, why do you ask?", to which I replied, "Are you sure, no flirting, nothing at all?".  Well of course she denied anything was going on so I showed her the phone and her mouth quite literally dropped. 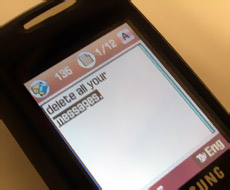 From that day on there were many more lies, so I left her and she hasn't made any attempt to get me back into her life.  After all the horrible words and the lack of trust she decided to ask for a divorce.  As it happens we both work at the same place and one night I ended up having a "fling" with someone else from the same company.  I felt bad about what I had done so I was completely honest with her about it, her only response was "Did you use a rubber?"  I had at least expected her to be a little bit upset, but it would seem she has already moved on and no longer cares.

Since all of this has happened I just can't eat.  I have gone from 195lbs to 165lbs in just two months.  I love her more than I have ever loved any person, but at the same time have never been lied to way that she has lied to me.  I've tried to stay positive about who I am, but I can't help wondering if anything was going on then and is she doing anything now.  I'm very broken hearted and I wish the pain would just go away and let me get on with my life.  Can anyone help?

Archer could you please give me the approxmate time Dr Messiah gives converts before he actualy requires the donations he wants?
06/07/12 Anon
-5

"My wife has been the bane of my life since high school. I am currently 80, so you can see that's the last 62 years we were together."
Thats what we need ,a bit of humour, made me smile anyway.
More parodies please on the spell casting krap that gets posted.
21/05/12 Stalag 14
0

Listen mate im in the same situation as you, only my girlfriend was texting her ex about them two having intercourse and saying we can make up for it next time, so I asked her about it and she said it was nothing. I decided to stay with her but ever since I find it kind me hard to trust her,i don't know what to do!
16/05/11 Gary
-2

I have just discoverd that my wonderful loving caring fiance of 2.5 years had recently contacted an ex from 5 years ago. She was just a fling to him, they broke up in spectacular fashion and she harrassed his friends for many months after. So if they broke up on very bad terms, why did he feel the need to contact her. I am devastated. He is so embarrassed and remorseful and said he doesn't know why he did it and he would never have met up with her. He realises our relationship is hanging on by a thread. I am 41 years old, he is 36. He had nothing when I met him. I have a beautiful home, good job, nice car, good money. I found it hard to trust anyone again since my first marriage (my husband left me for my sister). So why, when my fiance is now in a financially secure relationship, beautiful home, successfully self employed (all since meeting me) does he go and do this. He embarrassingly said it was the element of "naughtiness". But he repeats over and over that he hates her and she's a slag, that he contacted her to "see how she was doing". He told me that the last contact they had was 5 years ago when they split up but I looked at his old email messages and saw they had a flirty conversation a year ago (he claimed he forgot about that conversation!). We had been together 1.5 years by then and already moved in. I can see he is remorseful and both myself and his friends really do believe he hasn't seen this girl, its just been message contact, but were would it have led to if he had not been found out?..... I am in pieces and just feel like contacting one of my exe's just to get even :o(((
09/10/10 Lizzie
-2

I'm sorry this happened to you. But don't feel alone. This sort of thing has happened to THOUSANDS of other people. Now - as for her - let her go. She is not worthy to shine your shoes, dear one. Anyone who would repay the caring you have shown with this deceit is not worthy of you or any attention from you in any way whatsoever.
05/10/10 Granny G
-6

Your lucky you are still young and only 5 years together ........I'm 53 and my ex done the same and worse on me after 27 yrs of marriage. She's gone just 4 years now and though I loved and trusted her 100% she deserves and commands zero respect now . It was and still is a bit tough at times but I am moving on and I know you will too . There is plenty of worthwhile life expieriances out there no matter what age you are . If one or other partner decides to stray for whatever reason and is caught , the relationship is doomed . Suspicion and doubt will destroy the trust required for a good relationship. Better ending it then living in a life of mistrust. You are in a better place now , go enjoy the short life we all have , no need to put up with lies and deception.
29/08/10 Shrew101
-9

hey man....i can't help but can understand what your going through......i'm sorry and reading your storey is helping me understand my situation better.
29/07/10 matt
-14

There appears to be an ever increasing number of man-haters posting to various blogs on the net, they seem scarily a lot more vocal than men who have been treated badly. Betrayal works both ways, I know, i've been there.
30/04/10 Rider of the Apocalypse
10

justin timberlake , what goes around comes around.
i remember dating this girl for 4 years along time ago and she was cheating on me. we split 6 to 7 years ago, just heard wind that her husband cheated on her and left her with 2 kids for another woman.
30/04/10 ed
6

Hi
You must have really loved her and she betrayed you. It's obvious she doesn't care for you.
My husband did the same thing to me. I had a bit of a breakdown as a result. Try and pull yourself together and forget about women for a while and find something that interest you.
20/04/10 My sympathies
-4

Thanks for posting that. It's really good to exhale your feelings and not just to keep it. The same (ex doesn' want me back) just happened to me and I feel terrible. There're some cells in my brain missing to understand why she doesn't want me anymore. It's so unlogical for me and everything felt different in my head before.
So, I decided to leave the feeling that I have towards her, the way it is. It's not bad, nor good, cause it's just the way it is. This person is my number one and why should I try to be busy and spend time with somebody else. One day, it all comes back to you and you will be just alone with the problem, so don't run away now.
How many people in your lifetime will you donate your faith (it's a present you make)?Were you designed to give your trust to random people, every date, any of all relationships? The answer is (in my opinion), yes and no. If you're looking for a deeper understanding of faith (that I call LOVE), then you should consider that there're not too many people in your life who will receive your faith completely. Once you start thinking like that, you'll see that you don't have to push away the person that treated you like ...., cause this person is in your heart. It's like your child. If your son or daughter treat like ...., will you replace them? No, you can't, and so is a partner for you (in my opinion). How do you want to love somebody endlessly when you make it a condition that this person has to love you the same way? That is a condition and it's very demanding. All you need (again, in my opinion), is to believe!!!!.......
22/04/09 David
-3

..........Don't listen to the words that say that there're many other beautiful partners outside and you just have to go and find them. Your feelings might be overexaggerated but there're still your feelings. Stick with it and take responsibility for them. It might be weird and peculiar, but that's the truth right now. If you put something on top of it, the problem will always remain the same and be just subconscious. Instead of thinking 'now I have to meet new people or travel or do something to forget about the person', just enjoy the positive feelings about your ex, write them down. Imagine yourself next to her and write down your most romantic dream. If it's your dream, make it true. Remember that you can communicate with people without speaking to them. Tell her that you love her (again, without speaking), enjoy that love and try to hug her and give her more love and more affection. If your words are true and you're convinced, you'll do the right thing. The results will follow believe me. It's all about faith. You must believe in the love between the two of you. Unconditionally!! That's why you are on earth, to love somebody. If you still love her, make use of the love and let it out. Not by talking or writing to her but by imagening her next to you. What you want will arrive, it just may take longer than your actual patience is trying to tell you.Learn from your patience, make mistakes, stand up, but please, face it!!
22/04/09 David
-5

Why I loathe chat rooms and weak men