My gripe is that men are weak and I despise the chat rooms they seem to find irresistible.  They would rather flirt with some tart in a chat room online than face up to their responsibilities.  I've found out recently that my supposedly devoted husband of 13 years was visiting adult sites on a hourly basis and also gambling thousands of pounds on some stupid game or horse.  Money which we did not have.  I trusted him and he's destroyed our marriage.

He was supposedly working from home and apparently too busy to even put a cup away.  In fact he was a lazy, conniving fool.  I am devastated and thought I could trust him.  It wouldn't surprise me if he's been with other women during this time.  I don't know who he is anymore.  I loathe him now.  He is just a low life sleaze bag. 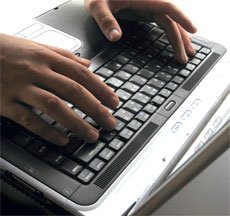 Men should endeavour to tell the truth (women who cheat should too).  I've had to resort to hiring a private detective to find out the truth behind my husband's lying ways.  When they spend hours and hours on the computer in chat rooms, ignore you, do nothing to help out, cling to their mobile phones, exercise and take an interest in their appearance - you know they're lying but don't quite dare to admit it to yourself.  I married a fool and now he is going lose everything because of his actions.  I have all the proof and I am going to take him for every single penny.  Oh yes, how does he feel now, is he's sorry I wonder?

Why didn't I see it the first time when a message from someone called Claire sent him all her love?  She wanted to know why he hadn't sent her a text lately etc.  I still don't know the truth about her.  Well they can have each other.  He has shown little respect for me or my child.  All he wanted to do was satisfy some little fantasy of his.  So some woman has caught his eye and he's throwing money around, our money, the money that I worked hard for too!

For this reason I loathe chat rooms and at the moment I loathe men.

You know, the man who cheated on me while I was pregnant was a lawyer. One I thought was ethical. Turns out he was not only cheating on me while I was pregnant with the child he so desperately claimed he wanted, but he was sleeping with every secretary in his office. He gave them all the impression that their flings would lead to more. Sometimes what you see on the outside is not the empty shell of a person that exists on the inside. His girlfriends have posted pictures of them all over the internet and that's the legacy that my beautiful daughter gets to live with. I don't hate men. I hate liars of any gender.
29/01/11 Freedom
-7

I would also leave my husband if he did the same to me as people only get one chance with me. Reverse it, if I lied and abused his trust I very much doubt we'd spend this Christmas together. If you forgive and forget lies then you may as well have the word doormat tattoo'd on you head for the next one.
22/11/10 Stepford wife
4

Why is it that men come to the defence of a man who has not only cheated on his wife but spent thousands of pounds gambling? As far as I was concerned we had a beautiful marriage, he promised me the earth; I loved him; trusted and cherished him both emotionally and physically. He wasn't content with that he wanted more. I'm not going to beat myself up about it and maybe I should have 'policied' him - would that make some of you doubters happy? I am worth more than that. I've lost respect for him - he is without morals. Some men are happy with the fantasy world and possibly want a robot or blow up doll for a partner. I don't think I could have done any more than I did already. It just turned out that my husband was a creep.
Why did he do what he did? He did what he did because he was lazy and reckless and attracted to sleaze. I've looked in the mirror and what I see is a decent, loving person. I don't need to take him to the cleaners - the money invested in the home was mine in the first place. He was just a parasite. I've learnt my lesson before I get involved with a man I will have him checked out thoroughly. He turned out to be the biggest mistake of my life.
22/10/10 Original poster
0

If this is indeed the case - you must ask yourself why he has acted as he has? So you are going to take him to the cleaners, well that's big of you. Look into the mirror and ask why he did what he did. You should at least try to work it out before flushing it all down the toilet - what doesn't kill you makes you stronger.
20/07/10 Devils Advocate
5

I think that the woman who makes the bad decision to get with a man that ultimately turns out to be a dirt-bag is just as much to blame. You see it all the time, women that go for their irresistible "bad boy" and then complain that he cheated on her later even though all the red flags that he was a cheater were there all along.

It's time for women to take responsibility for their actions, if a woman doesn't take responsibility she is bound to repeat her mistakes and end up in the same situation again and again. And I don't mean vowing to never get married again, I mean identifying what qualities you look for in a man and figuring out what is flawed in those prerequisites. I do feel bad for you, and I know that you will need a time to grieve for what has transpired, however when that's all said and done I hope that you learn from your mistakes so you can have a happier future.
28/06/10 Josh
0

To the original poster: I am so sorry this happened to you. It will take time for you to get over the pain and anger, but you will get over them. It's common to feel horrible after hurt and disappointment. What will help is to just take a deep breath and gravitate toward the people in your life who you are sure you *can* trust. When you're ready, meet new people, just as friends, so you can have a support system. Whether you leave him or stay with him, try to focus on *your* needs. Fighting with him won't make things better. After you've expressed how you feel about what he's done, drop it. Now is the time to focus on you. Do things to make yourself feel better, and treat yourself. Really nurture yourself now, and surround yourself with loving, caring people as much as you can. You will get through this.
02/06/10 Linda Mitchell
7

Woman hater for a change

I am sick and tired of Women slagging men off. There is good and bad in both sexes.Because Mens minds are preoccupied with sex at some point of everyday of their lives, women castigate them for it,rather than try to understand that they are born to be this way.Men are expected to be sympathetic to women during their time of month though,ok for us to be understanding isnt it!I have been married 27 years,my wife has lost interest in sex and now I am expected to be loyal and remain celebate for the rest of my life. Men have needs to you know.
24/04/10 Woman hater for a change
-2

Obviouisly a story about a women scorned.I don't defend his behaviour but why does he want to spend time in chat rooms and why does he ignore you most of the time.Maybe your the reason for his behaviour so you may have some responisibility for this outcome.Your just as weak because rather than face up to him you choose to employ a detective, aren't you also guilty of doing something behind his back.
24/04/10 Confident man
-12

There are some serious woman haters too and not just on the net. Try making a point without swearing next time.
21/04/10 anon
-2

There are some serious man-haters on the net. Am I the only man who had a relationship with a woman (long time ago) and later found out that she f*d most of his workmates behind his back, they even took sickies to f* her whilst I was at work. I felt totally humilitated to the point where I gave up my job, I was done for assaulting 2 of my friends at the same time and for a whole year my life was completely wrecked. But I came back met the best woman on the planet and we have been happily married for 2 decades. So man-haters of the world, stop blaming everyone but yourself and get a f* life. not all men are weak, neither are all women.
21/04/10 Rider of the Apocalypse
-3

Raise above the cheating

I'm beginning to think most men are pigs. I have come to the conclusion that they only think with their private parts. They want the respectability of marriage but as soon as the wife is out of sight their cheating. any excuse it seems. These days they can cheat and have relationships online - saddos. My husband is not only lost me but our son - he wants to make amends but he's cheated and been forgiven once too often. He's also lost the roof over his head. Thank goodness for private detectives and good lawyers.
20/04/10 Raise above the cheating
-4

meh, LoL I really enjoyed your coment below LoL it is just like that eminem song LoL would the real mikep please stand up! soooooooooo funny LoL.
28/09/09 Moaning Minnie
-10

Would the real MikeP please stand up! Like we fell for it, fake MikeP. I was copied on here and had to change my name a couple of months ago. It's easy to tell from a person's posting whether or not they are an impersonator of the person they are impersonating! I really don't know why anyone would bother though, too much time on their hands.
28/09/09 meh.
-15

I'm a bit reluctant to post my number here, gow, I might get the bumchum brigade calling me, not to mention the likes of 'Hickhead' and 'listen to me now', who are clearly obsessed with me and watch avidly for my postings. I'm afraid we'll have to continue to live with our 'virtual' relationship, but at least now you know what I look like.
27/09/09 MikeP
-3

Cheating husband took all our money, left me broke

I want my ex back, what should I do?