Isn't it strange how people act when you tell them you don't want to get married?  If (like me) you are in your mid-thirties and still not married you are either weird or there must be something wrong with you.  By the way I am thirty five and live with a man who is a bit younger than me.

He is twenty five, but his age isn't an issue.  It's the other people that keep pestering us about weddings all the time that are the problem!  We have been together for almost four years and are very happy, but every so often someone will say "Why don't you two get married?" 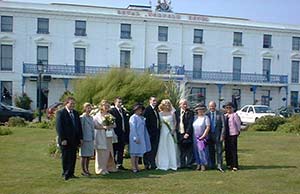 My boyfriend has a three and a half year old child from a previous relationship also, so we both feel that there is no need for any more kids.

People say I am wrong to not want to have any more children and in their own shallow way they think I don't truly love my man because I don't believe in marriage.  Yet I love my man as much as a married woman!  In fact probably more so because I don't need a silly piece of paper and an expensive party to prove my love for him!

Where does all this rubbish come from, that after three or four years in a relationship you should commit to each other by getting married?  It's all rubbish and old fashioned!  There's no place for that kind of thinking in our modern society.  Does anyone else here agree?

Yep, I agree with the not getting married thing. Almost did it, been proposed to a few times, but I just can't go through with it, it feels like death to me. I feel like I would have settled, I don't mean settled for the man, I mean, given up on myself and faith in myself to accomplish a lot on my own, be that a career, finances, ability to meet new people, charity work, spiritual work. I just always felt my time and energy is better spent on those things than on all the intricacies of a marriage or raising children. I just don't feel the need to pronounce to the world that I found someone and own him or he owns me, and don't feel the need to bring more children into this world when there are so many that are not cared for properly. I love being single, can do whatever I want whenever I want and I don't have to answer to anyone... I have many boyfriends and I love the company of men, lots of men would not like to hear that and have words for a girl like that but ah who cares lol. I just think women are VERY much told what they can and cannot do in this society and to me that speaks of a male dominated world, still at this time in history! So I just choose to not be told what to do, I won't give into it and I wish more of my sisters would smarten up and join me. It's about freedom.
11/08/13 Kerri
0

Although I am someone who believes in marriage, I completely understand your situation. When your views are different from that of the society in general, you have to face these problems. I suggest that you don't get affected by this and just don't give a damn. I would love it if my bf proposed to me but he doesn't believe in marriage and even though we have had discussions about the pros and cons of marriage in a society in general, I have never suggested to him that he marries me. It's his call...I cannot throw away a wonderful relationship for a piece of paper. Personally I do not think it's a big deal or actually it's any deal if someone doesn't get married although I am unable to understand why getting married is a big deal for some people. But well that's their opinion and I have no problems with it...neither do I ever pester anyone about their decisions. You just do what you want girl. All the best!
13/11/11 Theskeptic
-10

I need advice what do I do every man in my town won't go out with me because apparently I have a scolded tongue? My father is so annoying because he has a belief that my younger sister is not allowed to get married until I do
05/04/11 Lonely-Lass51
4

I need advice what do I do every man in my town won't go out with me because apparently I have a scolded tongue? My father is so annoying because he has a belief that my younger sister is not allowed to get married until I do
05/04/11 Lonely-Lass51
3

I'd have to agree with you. My boyfriend and I were going to get married this year, but had to call it off due to financial problems. Today, he told me that he wants to get married next summer, and I really don't want to. He's practically begging me to marry him. I don't understand the purpose. I live with my boyfriend, and we've been together for two years now. I think that couples who just live together are more bonded, and it's more honest. I wouldn't want the only thing that's keeping me here with him to be an expensive divorce. Love keeps me here every day. It's why I don't simply leave. Whereas, in marrige- divorces are expensive and they are a pain in the ass, and some people still don't believe in divorces, why sign yourself away to that?
13/03/11 MoldSaint
-8

exactly this is going on in my mind now a days... I totally agree with u.. its feels so gud to hear that u too feel the same... I too don't want to get married... it creates so much of pressure upon u... and moreover at the end of the day all what matters is your own happiness.. just do what u want and not what others want...
having someone to love in life is definitely the beautiful feeling... one need not make a declaration of his love to the world by getting married.. instead of spending so much of money in the marraige ceremony.. I wud prefer donating it...
11/02/11 Monika
-4

I din't because at the time my partner said we would get married at some point....now he doesn't want to!
08/02/11 Partridgegirl
0

Partridgegirl , if you are not married to the child's father why didn't you give her your last name?

I understand your sentiment but as a woman in her mid thirties with a young child who has a different surname as me I find it increasingly fustrating that I have to explain who I am as I am the one who deals with all of our daughters appointments yet. Maybe if people didn't still look down on unmarried mothers and make us feel awkward then marriage wouldn't be importanat etiher. I would like to marry my partner but he is having none of it but then he isn't the one who has to explain who he is!
01/02/11 Partridgegirl
-5

Im in the same boat, ive been with my partner nearly 13 years. We have 2 kids together so yes have discussed getting married, but to be honest neither of us are really bothered about signing a piece of paper to prove that we truly love each other and are commited to each other (Does 12 years not say enough). I have seen My parents, sisters, Friends all go through the whole splash out on big weddings only to get divorced a few years later, and to be honest I couldn't bear that. Id rather carry on as we are and be happy for as long as we can (hopefully forever). A marrige certificate does not prove anything, showing that you are commited to your partner does. Getting married is not a big thing like it was in the 50s/60s/70s etc its more of a show of expense than show of true love and honesty. People only pressure you to get married as it is expected of you if in a long term relationship, All I can say is WERE NOW IN THE 21ST CENTURY.......Things change and marrige isn't for everyone SO GET OVER IT.
03/11/10 Sassa30
0

hey Jobish..... so she dose not love her man because she won't marry him!! that's sounds so unbelievably stupid...... long ago ... someone woke up invented marriage!!! a piece of paper!!! mostly for legal reasons, just like laws, stop signs, red lights etc....so that those not justify someones emotions on love!!! I rather be smart then ducking out of things if they are not honky dore!!!

I am glad someone agrees with me. Romance is one thing, marriage is a whole different ball park. as a women I feel sorry for the girls out there that puts so much expectations on getting married and having kids. And these are women who are not even in a relationship,,, they don't feel fullfilled, and they feel by getting married and having kids there lives are complete...Honey your getting into a whole new life!!! it's rare people getting married because they are inlove, instead getting married because it's time to settle down and have kids!!! do you know how many men and women that I know that today they are out cheating!!!! some have called me to get with them,,,,i only feel sorry!!!! I can feel the misery they have!!! what a stupid way to think about your life,,,, it's pretty narrowed minded !!!! why settle? it,s your life and squeeze it as much as you can from life....Do you really want to live unhappy in a unhappy marriage and believe you can't get out!!! or live life being ahppy everyday and doing what your heart desires!!!! we will settle when we are dead!
22/10/10 Lola
-10

I don't want to take the romance out of the idea of marriage but ''Lola'' is right. most marriages turn stale after the first 10 years. I think that the author of this gripe has got the right idea. people should think long and hard about marriage because life means life. divorce can be painfull.
19/10/10 mardi gras the candyman can
-19

Dealing with the ex wife is so frustrating

Cheating husband took all our money, left me broke

Weddings are expensive, why do they cost so much?