Last week it was my graduation ceremony, a day that would be memorable and it was spoilt by little babies and toddlers screaming.  Universities say that graduation ceremonies are not suitable for children under 5 years old because such a ceremony requires people to sit still and be quiet for an hour (or two) which is not going to happen with children in that age group.  What they are saying is not unreasonable either, because you can't guarantee that they will keep quiet throughout and won?t get bored meaning they will play up during the ceremony.

Children - they need to sit still and be quiet

When I was in Guildford Cathedral for my graduation ceremony I saw quite a few people bringing in young babies and toddlers.  I understand that maybe some these offspring are students' children and they want to see their mummy or daddy graduate and get their certificate, but if the university says unsuitable for under 5s then they say it with good reason.  They are not saying it is unsuitable for older kids because they would expect kids over 5 years old to be at an age where they are understand that they need to sit still and be quiet for a long period of time.  It is under 5s who are unlikely to understand that because they are still young and developing. 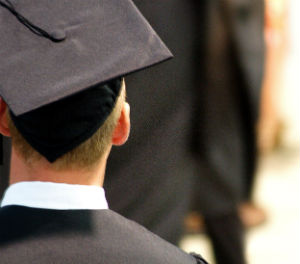 They are not saying that under 5s should be excluded from the whole graduation day itself because there are places that the little sprogs can go to that are more suitable for them.  The cathedral green outside is nice for the little tykes to crawl or run around in as it is an open space.  Better than being made to sit inside for a long time til they show boredom.  Also there is limited space in the venue so I think my university should not allow children under 5 to attend the ceremony itself but can go other parts of the place with an adult.

The university could make a creche specially for the under 5s and set up a screen or something so they can still see their mummy or daddy on video, that way they don't miss out on the ceremony itself.  Or they could make a segregated 'under 5s' section at the back near the entrance so that if a baby/toddler causes disturbance for others then the parent/carer can just take them out until they calm down and then bring them back in.

At my ceremony, there were a few babies and toddlers shrieking the place down.  I thought to myself this not a creche this is a ceremony which requires attendees to sit down and be quiet.  If they can't do that then they should be made to leave.  Some parents did not even bother to take their child out when they were being very noisy.  Also speeches are being read out and it sounds rude if someone lets their child make such a racket that the audience cannot hear what is being said.  One university has made the decision to ban under 5s from the attending the ceremony only after receiving numerous complaints of what was meant to be a memorable occasion being spoilt by people's offspring.  It?s not like the tots have asked to attend, they are just being made to go and I?m sure they?d rather be playing somewhere...

I did notice that there were more little children outside than inside which shows that some parents knew what is best for their children as well as other attendees.  It?s just the ceremony itself that should not allow under 5s.  Ath the reception afterwards everyone is welcome to join in the celebrations.  If the ceremony was outdoors then it might be a different matter.  A graduation is meant to be a memorable day and it can definitely be ruined by screaming little children and their parents who do very little to quieten them.  Please arrange childcare for such an event so that you don't spoil it for others, especially if they don't have small kids of their own.

I totally agree about screaming kids everywhere, the supermarket, the streets, the jobcentre, & even doctors waiting rooms & libraries. You just can`t get away from the little b*gg*rs! I don`t know why we can`t have creches or nurseries where parents can leave their offspring while they go about their business. It seems that modern society is all about what children need & want, & adults have taken a back seat, & people are encouraged to breed on an industrial scale.
19/10/12 hairyfairy
-3

Dear kharma, I totally agree with you. I think I have the right to complain to the vice chancellor about this because they are the ones who are saying to parents it is unsuitable for under 5s to attend because the kids will just get bored. They'll probably take my complaint seriously as well. I'll give it a go then.

Rupert, I can't agree with you more about toddlers ruining the relative peace and quiet of everywhere. These days there seems to be no kid free zone anywhere except my own home. (Sorry if it sounds over the top but to me it feels they are everywhere nowadays.)

Dear Funkg, thank you as a parent for understanding my gripe and from what you say you sound like a very considerate parent by not taking your baby son as he would not enjoy it and as it would also disturb others. I wish other parents were more like you but these days it is too much to expect that kind of consideration from other parents because they don't forsee that their kids may not enjoy that kind of thing as well as their kids annoying others with their behaviour because they are simply bored. It is these parents' responsibility to make sure their kids are occupied and entertained and well behaved. Basically, these parents should not drag their kids to such places if they are going to play up and annoy others. It is a shame that my big day was ruined by a minority of thoughtless parents bringing their small kids to the ceremony. The majority of the parents were considerate by letting their young kids play outside on the cathederal green not to disturb others and also because their kids would be happier outside playing than being forced to sit still for an hour or two.
12/11/11 Angry Autistic Female
-8

I'm sick of toddlers everywhere ruining relative peace and quiet. It's the me me me society - complete selfishness and disregard for others.
02/10/11 Rupert
-7

I think this is a disgrace, and I also think people should think twice before bringing their screaming brats to cafes and restaurants also. Unless they want to pay for everyone's coffee/lunch which has been ruined by the bellowing racket.
22/09/11 Sushilover
1

No problem Kenny. As it was about the posting problems it hardly matters now that you have fixed the hiccups.

Problem is, I have now forgotten what I was trying to post originally! Must be getting old.

Sorry all for the problems posting recently. Put in some changes to deal with Korean and Chinese spammers (don't they have anything better to do there?). Anyway, made a boo-boo and have fixed it.

Sorry Petra, deleted your comment by mistake. Got a bit carried away there!

I am a parent I and I do understand the gripe, my baby son does not have the tendancy to scream the place down but I would not take him to a ceremony like this because it would not be fair. Anyway personally I do not think that graduation ceremonies are a 'waste of time' my mum was very proud when I did mine.
20/09/11 Funkg
-6

Fred E 4 once i totally agree with you, i have often wonderd what the point of degree ceremonies are? apart from looking like a git wearing a daft hat and a robe.

If i wanted to look that much of a cretin i would sit outside Starbucks drinking a Coffee and playing on my Iphone.
20/09/11 Titfer
-15

I enjoyed my BSc one but when I did my masters I didn't go. I was only about two years older, looked the same and the robes and coloured bit were the same so I thought, What's the point? You'd never know which was which from the photo's.
These ceremonies are usually fairly drab but I guess it is something nice to attend to celebrate the acheivement. The after party is normally the best bit. Especially if you go the informal one arranged by the student union. It took me days to recover from that!
19/09/11 Freddie
-18

What a waste of time degree ceremonies are. For my first one I went so my parents could have a photo of me with a silly hat on. I didn't tell them about the second one. They are always held in the summer and are very boring occassions. Best to enjoy a day on the beach and get your certificate through the post. I would have thought a few entertaining kids would liven the occassion up a bit.
19/09/11 Fred E
16

This is disgraceful. Your cermony should not have been ruined at the expense of a few mothers and fathers who want to turn your university hall into an indoor playground like what they have already done with such places as pubs, malls and at rated 18/R film screenings. You, myself and others should be getting out there, stamping our feet and making these issues known, otherwise children will continue to spoil other people's cermonies, other people's dinning or pub experiences, or a simple trip to our local supermarket for our daily groceries. I am not anti-children, I am just sick of some parents thinking that their children will be okay if they turn their backs for a couple of seconds, or that other people won't complain if they are left to run around amock.
19/09/11 Kharma
17

Can you belief it

Angry Autistic Female.......... I am Gobsmacked..Do you mean to tell me that your day was ruined by screaming toddlers were there any over liberated revellers there as well....
19/09/11 Can you belief it
6

I can understand your anger - this is unfair. All that hard work and when special day, longed for day comes other people's thoughtlessness ruin it. There is a time and place for everything and little ones under five on such a solemn occasion are not accpetable.
19/09/11 Fedup
2