When the SBs demands are not met it will start to scream its head off and have a tantrum.  It seems that every bus, train, plane, shop, and library has a resident screaming, spoiled brat!

I have just returned from my local library and lo and behold there were not one but two resident SBs going at full throttle.  The librarian did nothing and the mothers of the two children merely went 'shush shush'.  In that situation if I had been one of the mothers I would have removed myself and my brat from the library until it had calmed down.  But no, the mothers continued to walk around the library inflicting their noisy kids on everyone in the vicinity! 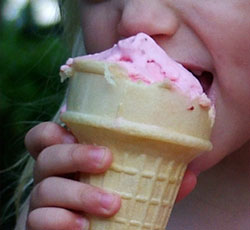 Been to some parts of Africa lately?  You will not find the SBs there, merely a gentle wail, moan or sob as they scrape around for some food to eat!  If I had my way all parents and their screaming brats would spend some time away from this ' want, gimee, gimee' culture, which it seems is so much worse during the school holidays.

It all comes down to parenting skills, which are pretty much absent in a large number of these modern mothers.  It seems that any dissent from the SB is met not by application of discipline, but a reward such as a sweet etc.  The child then learns that to get a 'reward' it only has to start screaming its head off.  You can see how we've ended up where we are now.

Instead of a reward may I suggest a gag, or better still remove the screaming brat from my vicinity and inflict it on someone else please!  Even better don't have kids in the first place and save the planet.

Oh my god it's getting to that time of year again where all you can hear is "I'm bored". You can't even properly pin point the actual date when school finishes as it depends on the school. So we have probably near enough seven/eight weeks where you are disturbed by squawking kids and tripping over them and have them under your feet in town on your one hour lunch break, and you are on a limited amount of time trying to get your jobs done.
20/07/13 Janie
3

I wonder though...as someone said, is it an offence to squirt someone with a water pistol?
16/07/13 Sainsburys Fairtrade Dark Chocolate
-2

Just for the record I'm on kidding I wouldn't really zap anything bigger than a fly, I'm only kidding, honest.
13/07/13 lancslass
-1

I have just bought one of the bug zapping bats you know the ones where you charge them up and it zaps flys and other summer nasties, hmmmmm I wonder if it works on anything bigger lol.
13/07/13 LancsLass
0

"Thank you for your ideas x I have looked at Adult only hotels and still looking but the general consensus seems there are very expensive, but if I have to pay a little more to have a brat free holiday then so be it.

Thank YOU not "u"

laser rifle - Maybe your post is a joke but I would be careful with your paper bags and water pistols. I'm sure there's an offence you could be done for.
03/04/13 Teutonic knight
-4

Thank you for your ideas x I have looked at Adult only hotels and still looking but the general consensus seems there are very expensive, but if I have to pay a little more to have a brat free holiday then so be it.

Forgot to add, always check the small print about a hotel's booking terms, or ask the agent to; some are used by tour operators who don't allow kids, but sell other rooms to operators who do!

Also, some operators do "Adult focused" holidays, but these are not guaranteed to be child free.

It has to say that the hotel itself does not accept bookings with children.
26/03/13 grumpyoldwoman
-1

Jane, I feel your pain! I remember going to Tunisia once and finding out that over 120 kids were in the same hotel. Mostly German, they used to have daily activities. (They were known by the English guests as the "Hitler Youth" of course.) This is aside from a couple of near accidents with unsupervised children which could have landed me in hospital, or worse.

The best thing you can do is ask a travel agent or look at all the main tour operators' websites. Some companies do adult only hotels (by the way, if you do an internet search for "adult only holidays" you will get some very interesting results!); Thomas Cook have a range I know. Otherwise avoid hotels which advertise any facilities for children.

We stayed at a place near Paphos on Cyprus once which was adult only; can't remember the name but it may have changed now anyway. I think there are some adult only hotels on Cyprus, but it may not be the best place to book right now!

We have just returned from a weeks holiday in the sun and everything was just hunky dory that was until Wednesday when three families moved in with three kids and lts of noise. No fun being woken up at 7am by screaming brats. Sometimes parents attitudes consist of I'm here with my child what u gonna do about it get out of my wy I want my next holiday brat free, can anyone suggest any child free holidays or hotels.
26/03/13 JaneQ66
1

I think their parents just don`t care, they little monsters who are making the fuss are often fat, & their parents just give them sweets to shut them up. I think people should have to take exams before they are allowed to have children.
14/10/12 hairyfairy
-6

In all honesty i can sympathise to a certain extent.....even though I am a mother myself. I heard a mother with her young child on Friday at the school gates 3.13 approx and the mother was talking away to her friend. The child was pulling at her sleeve trying to get some attention and all that came out of the mothers mouth was 'oh my god will you just shut the xxxx up christ roll on monday'...when parents attitudes are like this, its usualy their kids who behaves like brats!
However I do have a problem with child haters in general, I find it dispicable that young people are told to be nice to their elderly and show respect yet there are a large group of adults who simply make no effort whatsoever with youngens.
15/09/12 ageism
-1