Why is it that people are no longer capable of sitting in a cinema for the length of a movie, even a relatively short one, and keeping their mouths shut?  I refuse to go to my local flea pit as I am always surrounded by morons who think that they are sitting in their own living room and proceed to talk all the way through the entire movie.

When you try to ask politely if they would be quiet they either get abusive or talk even louder.  As for the young ones, well, we mustn't tell the little darlings off as it is a 'PG film'.

This is what I was told by a mother when I asked a group of boys old enough to know better who talked and sang and were a general pain in the rear.  Hey, if you want to talk to a movie why don't you wait until it comes out on DVD, play it in your living room and talk to your hearts content, leaving the rest of us to enjoy movies at the cinema in peace and quiet. 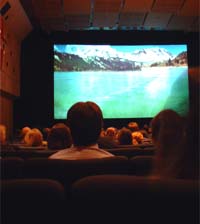 One more thing about kids in cinema.  I went to see Pirates of the Carribean 3 and Spiderman 3 recently.  On both occassions parents brought in children that were far too young to be there really.  There was even a young baby who yelled and cried all the way through the film - it was a complete nightmare!

All the mother did was occasionally mumble to the little one to "be quiet".  Of course they were presumably hungry or something and carried on crying regardless spoiling the film for anyone sitting nearby.  Why did she not either get a sitter for the evening or go to one of those special parents movie afternoons that some cinemas have?

At one of these occasions I have just mentioned we actually gave up after 10 minutes trying to watch the film without success.  We eventually walked out and asked for our money back.  I started taking my daughter to see movies at two years old, she was always well behaved and at 16 now dislikes ignorant people at the cinema as much as I do.

Finally something i can agree with!!
Stay away from the kids club movies usually shown in the early morning as this is when lazy parents usually leave their kids to run riot while they sit on there backsides.
I recently went to watch a movie at my local cinema and a selfish parent decided to let her brat(yes BRAT) run around the seats screaming, shouting, dancing...at one point he came up behind my seat and smacked my son on the head. It was all I could do but have it out with this slob of a no hope mother!!!
KEEP HOLD OF YOUR KIDS IN CINEMAS AND STOP WAITING FOR THE QUIET SCENES TO OPEN YOUR TENTH BAG OF CRISPS YOU SELFISH LAZY PATHETIC FAT SLOBS!
14/09/12 MIMS
10

I had the worst experience in my life watching a movie today - a French family of three talked through the whole movie, and when I shushed them, the younger girl gave me the dirtiest look and retorted that she was translating the plots to her non-English speaking relatives. If that was not the worst, there was a baby in the theater who gave occasionally screams and cries during the movie, making great sound effect. To make things even more perfect, there was a senior couple sitting behind my friends' seat, and one of them was kicking our seats constantly during the movie while exchanging small talks. What is wrong with people these days?
10/09/12 YSS
0

I can;t stand idiot 20 somethings, that sit making their stupid comments.
Go home you babies and f-off & annoy your parents who couldn't even to teach to act like a human being in a public place - no wonder no-hoper 20 somethings can't get out of bed to get a job and when they do get a job they can't even hold on to it.
Sick of 20 something, I don't give a s*it attitude and I can do what I want when I want and don't dare anyone say anything to me.
08/01/12 BKD
6

ban babies from the cinema...or some cinema staff should just take the offending person out
05/10/11 hazza
8

Listen, Damfino. The next time it happens, just stand up and face where the yacking is coming from and shout at the top of your lungs:

Why is it that cinemas sell (apart from being pricey) food in bags that rustle loudly, then people will insist on rustling it when digging about in it for a sweet or a crisp. I have also been at cinemas where people talk, etc. It is not just talking and rustling though but smoking; when 'Day After Tomorrow' was on at the cinema, my friend complained after the film had finished because a man was smoking in the seat behind; we actually got our money back after we pointed out the man to the cinema manager.
27/07/10 Dommy
-10

That is the main reason I never go to the cinema anymore. The constant chatter of morons who think they are in a playground and the rustling of bags and noisy eating of food and drink just annoyed me so much I now refuse to go to the cinema. I prefer to wiat for the DVD. Going back some time ago I was at a Dire Straights concert would you believe and there were two blokes behind us. One of them insisted on giving a running commentary in the quieter moments to his mate about what guitars they were playing and what chords they were hitting all the way through. My then Wife turned round at one point and said "If I had wanted a commentary I would have asked for one" It shut him up for a while. In the end I turned around and fixed him with a do you want a slap stare. he said no more.
26/03/10 Baz
-3

Most gripes so far appear to be from punters attending commercial presentations. I had the misfortune to experience this tonight at the Jameson Dublin International Film Festival, attended, one would assume, by hardened film buffs, and this had been clear until tonight, until a pair of idiots insisted on commenting on EVERYTHING, until I could take no more, and, as soon as I ask them to "Will you please SHUT UP!", they tell ME to shut up? At least the guy beside me IMMEDIATELY stood up for me, and they were made fools of. It surprises me that there are not any "GOING POSTAL" type situations occuring in cinemas!
28/02/10 Rowla
16

Dear Damfino,
This is another symptom of the" I'll do what I like " mentality which is obviously very popular in this country.
I often think it surprising that cinemas are still in business, given the kind of peasants you have to put up with if you go and see a film.
On one occasion, we complained to the management who were extremely reluctant to do anything about the noisy and disruptive gang bedhind us. Given the obviously violent nature of the eldest male among them (bet he had a knife) I don't fully blame them.
I just have to give in to that home cinema system...X
19/11/09 Bukowski
-4

I just went to see Final Destination 4 at the Aylesbury Odeon. I was really looking forward to a day out and a day away from work. I had the misfortune to sit in front of two of Aylesbury's finest chavs who talked non stop loudly ruining part of the film. I got up and moved a couple of rows but could still here them. I couldn't believe people would pay over £10 just to talk through the whole film. Mind you I doubt they had a brain cell between them but this is the last time I will be going to the cinema if it is going to be ruined by ignorant and inconsiderate creatins.
02/09/09 Koochin
0

Nick, you should have got up, sauntered over and beat the living crap out of them. You'd have been removed from the cinema and charged no doubt. But teenagers (some) think they can get away with doing what they want. Done it most of their lives and therefore need a sharp attitude re-adjustment.
18/07/09 Freddie
-3

I really agree with you - I was watching a horror and some stupid women in front was saying "why dont she run over there" and things like that. After about 10 times of her talking I had enough and kicked the back of her chair - that shut her up. I wouldn't reccommend doing that though becayse then a few others started talking to annoy me.

The annoying thing is that they put ads up before the film saying DO NOT TALK and DO NOT USE YOUR MOBILE during the film but the annoying brats just blatantly ignore it! Perhaps the threat of a £50 fine would help them pay attention and show some respect.
22/06/09 Ex Cinema Fan
4

I saw Transformers 2 at the cinema this weekend too. Well ... I say I saw it. What I actually did was pay a small fortune to listen to a small child nattering to his indulgent parent non-stop, mobile phones flashing all over the place and the three kids next to me talking all the way through the film. At one point, the little idiot next to me was even about to make a phone call! I asked him what the hell he thought he was doing, and he just muttered and skulked off outside. I've written to the Odeon to ask them why the hell we can't have ushers keeping order, and am now waiting for the bog-standard reply that tells me my experience is a one-off and doesn't usually happen in their theatres. Even though it now happens every time you go to the cinema.
22/06/09 B P Perry
8