I have a real issue with parents with unruly children that misbehave in public.  They just allow their child to run amok and do what they like.

I had an appointment to see a doctor last week and was sitting in the waiting room until it was my turn to see the practitioner.  I was quietly minding my own business and reading a magazine as one does to pass the time when suddenly, my leg was kicked by this little brat as he tore across the room from one side to the other.  His mother meanwhile, sat several feet away from me reading a magazine did absolutely nothing.  She just didn't give a damn that her child was being a right pain to complete strangers.

Next thing, the young brat decide to get up on an empty seat and jump his way across the waiting room on the furniture at the same time yelling his head off; still no response regarding his behaviour from his mother.  Eventually he finally gets fed up walking over the seats and just stands making faces at me. Presumably because by this time I'm glaring at both him and his mother, wishing either the mum would do something, or the boy would just sit down.  The little **** then just trots over to his mum and proceeds to badger her with the 'Mum I want sweets' routine.  This actually gets a reaction this time and she hands him a packet of tic-tacs with some vague request to sit still or he won't get any more. 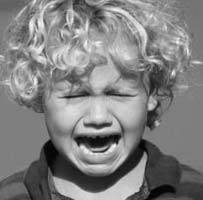 ...in case some busy body reports them to the police

What is this?  Is it some kind of reward for terrorising the rest of us?  I just can't believe the way some parents let their children do whatever they like in public.  Have they no shame?

If it were my kid, I'd have been very cross and had no qualms about publicly chastising him or her.  I guess part of the problem could be, that in these politically correct times we live in, parents just aren't able to do that anymore.  Too afraid to punish their unruly children for being naughty in case some busy body reports them to the police.

I believe children should be well behaved in public, and it is the responsibility of the parent to make sure that happens.  I know that things are very much different for the younger generation these days, but some values are worth holding onto.  Respect for elders, good manners and behaviour etc. it would seem are a thing of the past.

@not as easy as you think

It's called giving them up for adoption if you can't handle them. Hospitals and fire departments are known as safe havens. You can just drop them and go. Google it.
05/05/21 Don't bug me
0

Not as easy as you think

I'm all for pulling my child away if she ever attempts to hurt a stranger and giving her a good telling off. However if it's just a case of being a little loud or hyper I've learnt by experience that telling her to quieten down or sit still will actually make it worse. Then if I continue she becomes extra stubborn and flies into a screaming tantrum that lasts hours. I really don't think people in a waiting room would prefer that... So it may look like I'm not doing my job but I am. I do not believe in smacking but that is not even an option now to people who do. So for those children who are extra difficult and hard to control, hmmm not sure what we can do!
09/06/14 Not as easy as you think
0

What did you have to say on the subject of unruly children OT?. Many discussions other than how to wear a tie, wander of subject.
04/08/11 Boblet
-5

What is it with you posters. You all seem to have lost the plot....."Parents with unruly children" is the topic, not posters waffling on making inane comments about ???. I am away....this site has too many wafflers.
04/08/11 Old Timer
-15

Petra I am happy to say we both seem to hold similar thoughts. As for people posting in another's name only the people involved will ever know. I for my part can recognise a style of posting & firmly believe that I have recognised that style when self praise or conformation of questionable opinions is the required result.
18/07/11 Boblet
-18

I find it annoying when people post as me, although they give themselves away by their pathetic spelling and grammar, or simply by writing abusive rubbish. Why anyone should wish to imitate me, as I am probably the most disliked poster on this site, is quite beyond me, but they do!
18/07/11 MikeP
-21

GOW, I must have got the wrong end of the stick about the 24 hour delay.

Regarding the report thingy, it works fine with Firefox, although I am thinking of trying something else as it is getting very buggy lately.

Maybe I should try Chrome if people like it.

Boblet - I have agreed with you on many topics and I do understand why you like the idea of no log ins as this is one of the few sites left where you don't have to do that. I appreciate that myself but it seems as if Kenny is offering log in to protect user names for those who want it but those who don't can still post in the usual way. It seems like a good compromise to me.

Whether or not I agree with their posts is irrelevant, but there are a few posters who attract a lot of people - or maybe just the same one ? - who post in their name to have a little cowardly pop at them. This seems to me to be a form of bullying and I really hate bullies.
18/07/11 Petra
-7

"Kenny, I've tried it loads of times, including a few seconds ago, and always get the pale green window which only has a cross in the top right corner, otherwise blank."

Kenny, I've tried it loads of times, including a few seconds ago, and always get the pale green window which only has a cross in the top right corner, otherwise blank.
18/07/11 grumpyoldwoman
-5

Freddie, No problem and I do still appreciate feedback and suggestions.
18/07/11 Kenny (Site Admin)
-23

Hi grumpyoldwoman, I can wholeheartedly recommend Chrome. This market share analysis website will show you where it's going - http://marketshare.hitslink.com/browser-market-share.aspx?spider=1&qprid=1

In the meantime I'll look into the IE issue. BTW, does it do this every time and have you tried again since the problem first occurred?
18/07/11 Kenny (Site Admin)
-3

Kenny, I understand why you wouldn't go with that suggestion. I just made it in case it was something you hadn't considered and thought I'd help.

Grumpyoldwoman, I knew there would be certain individuals on here that would jump on my comment as they feel the need to do so every time I write anything. I consider their attention a form of flattery! It's nice to be loved ;-)
18/07/11 Freddie
1

Thanks Mike, I tested on Firefox too. No problems either with Google Chrome (my choice of browser) or Safari and Opera. The later versions of IE (8 and 9) were fine too so I'm wondering if this is the much dreaded and disliked IE 6!
17/07/11 Kenny (Site Admin)
-2