This week I met up with my friends from schooldays for a Christmas get together.  We went to Al Forno's in New Malden.  Not long after we were seated at our table several couples came in with their children.  Four of the kids were under 10 years old including a baby and it was at a time of night that would be considered very late to eat out with young kids.

The minute they entered the two boys present completely misbehaved at the table.  They were screaming at the top of their lungs and running around treating the place as if it were a creche that sells Italian food rather than a restaurant!  The little girl was no better either, but what really annoyed me most was the parents of these kids.  They did not tell them off at all, they were totally oblivious to what ruckus these ankle biters were causing to everyone around them.  Also it seemed as if their meal was dragging on forever.  The little brats kept demanding ice cream at a time when they should have left the place and be in bed (it was 10:30pm!), but the parents caved in and let them have it anyway.

After the wholly undeserved ice cream treat, the thoughtless fathers of these kids decided to stay and have coffee.  Actually I don't even know when they left the place because wed had enough and left before them.I hope they went home before 11pm because I think it is wrong to have kids under 10 years old in eateries at that time when they should be in bed (for God's sake why is a baby awake at 10:30pm?!).  When we were leaving only two tables were occupied and that included the family with the unruly brats. 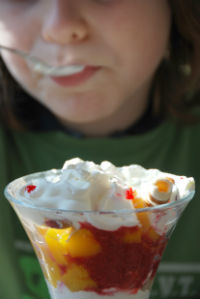 How are kids supposed to learn to behave in public when they are allowed to run riot in restaurants without their parents telling them off?  Maybe this behaviour is the norm in their homes, but it in public no one should be subjected to kids creating a nuisance and ruining a night out for others.  I understand that it is the Christmas holidays and people want to go out with their families, but there is a time and place to take young children out and they should not be out so late at night in a restaurant regardless of whether or not it is a holiday or school night.

To be honest there was a McDonald's down the road they could have gone to instead.  Kids will be kids, but I think that parents need to be parents.  Its not my responsibility to discipline other people's kids, but sometimes I wish I could since it would seem that they don't want to take that kind of responsibility upon themselves.

I hope my New Year's Eve get together with friends will not be ruined by thoughtless parents bringing their unruly kids out in the wee hours when we go out to celebrate the beginning of 2012!

@Annoyed Parent. You have ended your comment with the exact same paragraph as in a comment left on another gripe. If this site is clearly offending you, don't read the posts then. I'm sorry but the OP had her night out ruined because the parents were not making an attempt to control their kids. Even the most well behaved kids will act up when parents take them out and are there way past their bedtime. It's the lack of consideration for others that annoys a lot of people here. Also it's not fair on the kids if they are clearly tired and want to go to bed but can't because the parents want to have more wine. Also, some of these types of parents don't really give them the attention they need hence the kid acts up.
02/09/17 Anon
0

Maybe it was a special night out, one of the parents birthdays and they couldn't afford childcare?
A baby awake past 10pm? You do realise babies wake continually through the night for feeds don't you?
The biggest contribution to badly behaved children these days? Overworked parents having to work all hours under the sun to afford to survive. That means little time spent with our children who then lose out on a trusting relationship with us and therefore don't listen when we tell them to stop or quieten down for the millionth time. Mostly likely they spend all their time with grandparents who spoil them or at childcare where they feel not loved. Illegal now to smack too. Just make it as hard for parents as possible and then ponder why the children are badly behaved.
09/06/14 Annoyed parent
-1

Kids need putting in cardboard boxes and left in the corner while people can eat and drink in peace.
15/08/13 Fred E
-2

furthermore ELLISAR you would find life much more pleasant yourself with children that are a credit to your upbringing , its a pleasre to meet some children but very few these days
14/08/13 nell
4

you sound like a considerate parent who tries her very best to keep her kids in check and I'm sure its not an easy job for you. Don't feel I am tarring all parents with the same brush. My gripe only addresses to those who do nothing about their kids' unruly behaviour in a public place and I mean nothing! Yes you should defintely have a life where you can enjoy all its pleasures and should not give up on it just because of having kids.
02/03/12 Angry Autistic Female
2

I mostly avoided eating out when the children were younger because I knew that there were a lot of people with your attitude. I did my best to get them to sit and eat and not run around, but the under 5s are not easy to keep still for long so I kept it to an absolute minimum. It is no fun for the parents either! You run around like a blue ar$ed fly trying to get them to behave and you know that some people are looking down on you and muttering about discipline.
What you describe does sound unreasonable, I wouldn't like it either, but sometimes people with kids want to have a life - I gave up just about every pleasure in life to have my children and bring them up right and still people judged me for them not being quiet etc when they wanted.
26/02/12 Ellesar
-5

MikeP at a wedding= OFFS who invited that tw~t, i cant stand him what a up his own rectum t0sser who spouts endless drivel and lies and thinks he is something special.
26/01/12 Fred E
6

Mostly it is nothing to do with decent parenting - kids get bored and tired, this can affect the whole day for other guests, the happy couple and the parents themselves
26/01/12 Jan
10

"Children at weddings = spoilt day for everyone."

Let's expand on that :
Badly behaved children at weddings, which is usually the fault of the parents = spoilt day for everyone.

Well behaved children at weddings, the product of decent caring parents = enjoyable day for everyone.
26/01/12 MikeP
12

I agree 'today', kids were banned from the whole of my wedding and it was great, no brats ruining the day running round causing bother and crying when they are tired. All of the guests who had kids commented that it was nice to be without them and be able to relax for the day and have time for themselves to relax.
26/01/12 Jan
5

Yesterday, I was taking my exam at uni and out of all things this mother outside the exam hall lets her kid run through the corridors screaming the place down! Worst thing was the fact the invigilator made no attempt to tell the mother that there was an exam in progress. How inconsiderate is this?! I couldn't focus because of this and students who are taking exams have the right to do it in peace and quiet as they have enough stress to deal with. Some students, I'm afraid to say, who are parents of young kids have no consideration for their single and childless peers by letting them run riot in the canteen and distract others in the computer suite. It's a university for god's sake, not a nursery! I remember my graduation bbq being spoiled because a student brings her screaming baby to it and no 1 else brought kids! In fact, when she was partying and enjoying herself, her poor friends were forced to babysit her kid and they don't have kids of their own! It was also their special day too and instead of partying and enjoying themselves, they were being made to be unpaid babysitters to a student who forgot to use contraception (she looked barely 21 by the way)! I do have uni friends who are parents of young kids but they when they are brought to uni they are never made to be a nuisance around others who are studying because they are well behaved and disciplined.

However, my uni sadly has not enough facilities for families of young children. They recently closed the nursery due to the cuts and this means many parents have to go elsewhere to drop their kids when they are studying. That isn't fair because they have to pay for that care provided as well as paying tutition fees. Sadly, this country is not child centred when it comes to childcare. In Europe, they never have such problems like this.

In fact, my friends had numerous problems with childcare support at uni. They didn't seem to care and almost likened my friends to second class citizens because they have kids!

However, I do feel like with pubs, there is a time and a place when it comes to bringing kids to uni. These students need to make sure their kids understand it is a place of study and not a playground so that they don't disturb others who are studying. Especially, if these students don't have kids of their own! Maybe parents are used their kid's unruly behaviour but others aren't.

You can read more of this gripe I wrote about my graduation bbq in more detail in the 'Quick Gripes' section.
21/01/12 Angry Autistic Female
1

About 4 years ago I was in a Japanese restaurant when a family came in. The parents sat there and ignored their children while they ran around the place creating havoc. After a short while I got up and went over to their father. Very quietly, and to not cause a scene, I told him to control his children or leave as they were upsetting other customers. I then told him that if he didn't I would have them removed from my friends restaurant immediately.
Well, he did stop them playing, ate their meals quickly and left. The owner, who I don't even know, came across and thanked me as they found it difficult to be direct about these things themselves. This family had become quite regular visitors and the children never ate, just the parents. They didn't really want their custom in the first place as it is not really a family restaurant. They then gave me and my wife our meals for the night for free.
I've been back a few times since and they usually refer to the other family saying they have never been back since.
19/01/12 Freddie
1

Parents are to blame