Coming back from London on a Sunday night I caught the 21:44 train from Vauxhall station to Wimbledon.  When I boarded the train I saw this family with two children under the age of five who really should have been in bed at home instead of travelling so late on a Sunday.  The older one was shrieking in a shrill voice, repeating the same thing over and over, as well as running up and down the carriage while her mother did absolutely nothing to control her.

The baby was in the pram howling and screaming, presumably cranky and tired because it was not at home and in bed.  Personally, I don't think it's safe to take very small kids on trains or other forms of public transport so late at night, because you don't know who can be on it at that time.  Also, it's not fair on the children who are bored and tired and want to go home, besides, who wants to be on a train late at night and have to put up with screaming kids? Not me that's for sure!

Another time this happened was when I came back from Cambridge.  I boarded an evening train and this family brought on a cranky baby who screamed for practically the whole journey - again presumably tired.  Why don't these parents board an earlier train so that their kids don't suffer, and more to the point so the passengers don't suffer?  I just can't comprehend why people travel so late with young kids, it really doesn't make sense.

I know I'm not the only one who has experienced this because sister travels regularly by train and has had similar experiences where parents let their kids be a nuisance to other passengers.  For example when she was travelling home from Brighton, this kid of about three wanted his juice but his mother said 'no juice for the journey' and he threw a massive tantrum for 40 minutes solid!  According to my sister, his mother said 'What's all the fuss?'.  In fact, it got so unbearable, my sister wanted to go to the next carriage but she thought it would be rude if she did so. 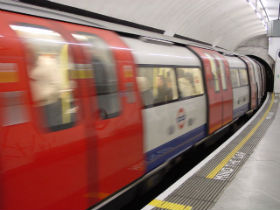 On another occasion during half term she took a train from Wimbledon to Charing Cross Hospital and this boy, who was at an age where he should have known better, decided to press the emergency button and caused a ten minute delay inconveniencing everyone on the train.  Why wasn't his father who was nearby keeping a proper eye on what his child was up to?  Some parents just let their children run amok on trains.

So often I have seen kids using the tube as a 'playground on wheels' and the parents doing very little if anything to control them.  They just run around crazy bumping into things, up and down the carriage and all the while their parents blissfully ignore them.  Meanwhile the other passengers just have to sit and suffer.  Come to think of it, why are the 'quiet' carriages being used by families when it is hard to keep kids quiet anyway on a train journey?  They are supposed to be reserved for those who want a QUIET journey!

In fact, why can't they make 'family' carriages so parents can take their screaming kids in there and let them do what they like without upsetting those who don't want to be near them?  Maybe then the rest of us could have a nice quiet and peaceful journey.

@Annoyed Parent. Haven't you read the OP's gripe properly? The juice related tantrum incident happened on Southern Rail NOT the London Underground. There are toilets on those trains. Please get your facts right before posting. The 'family carriage' idea sounds great especially if it's an early or late train. Why do you say to 'use common sense' when you haven't read this post properly regarding this incident?
02/09/17 AAA
2

She likely didn't allow the child to drink the juice as there are no toilets on the underground and that child is no longer in nappies. Bit of common sense doesn't go far. If my child springs into a screaming tantrum, nothing calms him down nothing. Should parents be forced to stay at home and never leave the house? Lol
Why are they on trains so late with their kids? Use your common sense for this one again, because they probably do not have the choice to go earlier in the day for whatever reason. Parents don't enjoy their kids misbehaving any more than u do.
The biggest contribution to badly behaved children these days? Overworked parents having to work all hours under the sun to afford to survive. That means little time spent with our children who then lose out on a trusting relationship with us and therefore don't listen when we tell them to stop or quieten down for the millionth time. Mostly likely they spend all their time with grandparents who spoil them or at childcare where they feel not loved. Illegal now to smack too. Just make it as hard for parents as possible and then ponder why the children are badly behaved.
09/06/14 Annoyed parent
-3

Jethro, I sympathise with your post and generally agree. However, the sheer number of people - particularly in the UK, a country that has experienced unprecedented mass immigration over such a short period of time, and with more on the way from next January - means that there needs to be more concentration on the rules that govern politeness and consideration of others.

Those of us who regularly post on sites like this are probably those people who, and I know this seems somewhat ironic, do mostly concentrate on the things that are calming and peaceful, and actually do not continually worry and moan. Typing a few words on an internet website merely allows us to express worries and concerns about those things that could be better, but I doubt that any of us would express such worries and concerns in more extreme ways.

It is precisely because we are pleasant, polite and show a great deal of consideration to others that we post and, indeed, generally enjoy life that we post here. We do not rant and scream at children, or throw stones, or use any violence whatsoever. The irony is that many people who take the 'enjoy life' response to gripes and groans are quick enough to resort to such measures when anything or anyone comes along as an obstacle to their so-called enjoyment of life.

Jethro, I certainly regard you in the former category, rather than the latter. So carry on griping and yes, carry on enjoying life also - the two things are certainly not mutually exclusive.
24/07/13 miserablemoaninggit
-4

This is exactly what will happen when most people are on the dole and teenage mums start popping out sprogs from the age of 14.
24/07/13 Nick
-3

MMG,Freddie,GOW and whoever. I realize that this is a gripe site and everybody has the right to gripe. Bad parents, dole scroungers, moron drivers, noisy children, corrupt politicians, the list goes on and on. The world has changed for the worst in our eyes, but surely we must accept that it will not go back easily to the way we wish it to be. Back in the 50's/60's life was more calmer, parents were more mature, life was more ordered and there was a lot less of us. The problem is, there are just too many human beings on this planet trying to survive, and the problem is expanding every day.I found that continually worrying and moaning about these things had made me feel unhappy with life, a pain to live with, so now I try to concentrate on the things that make me calm and at peace with myself. I feel privileged that I knew a better time, which many young people will never experience.
24/07/13 Jethro
-6

Freddie, I agree with you. The Welfare State has promoted kids having kids, and the subsequent lack of discipline and misery imposed on others.

Is 'The Weekly Gripe' a UK site or USA? I'm fed up with the spell checker suggesting in correct spelling because I'm using British, rather than American, spellings!
24/07/13 miserablemoaninggit
-5

Jethro, I don't mean the parents are kids because they're young at heart, I mean it beacuse they are about 15 years old themselves!
Young people are all about the moment. Exactly as you and I were when we were younger. Consequence was a thing to be disregarded and rules seemed unfair. As our parents were older we had rules to live by and they were imposed upon us by those people that we now see were responsible adults. The issue today is that these kids that are having kids are still in the rebellious stage of their lives. Teenage angst is still coarsing through their veins at 100mph. they therefore don't impose the rules on their children in their younger lives and by the time the parent has started to mature it is game over for the child.
24/07/13 Freddie
3

Freddie, It's good to see parents that are young at heart and play with their kids. Thank God most children can still laugh and play freely cause there are loads that cannot. You'll have an eternity of peace when your dead, enjoy life now.
23/07/13 Jethro
-13

The problem half the time is that the parents are still kids themselves!
23/07/13 Freddie
3

You usually find that these kind procreators allow their kids to hog the seats on a busy train/bus or any other form of public transport. I was alway brought up and made to give up their seats for the elders, I'm in my forties and still live by that social rule to this day.
03/05/13 JanieQ66
-3

Most parents I see today are sh1ts and dont give a toss about anyone except themselves. Their kids disrupt and ruin peoples day and the parents take no notice. This is specially true of slaggy mums from run down council estates
15/12/12 laser rifle
-3

Don't get me started on rowdy teenagers on buses. Next to wailing babies and screaching toddlers in supermarkets, these come a very close third on my hit list of 'pet hates.' I was on a local bus journey earlier this evening and on board comes a 'rabbble' of disruptive and rowdy teenagers shouting and screeching their heads off, without a care in the world for anyone having to suffer their assnine chitter chat and screeching laughter and banter on the top deck. One of them found is hilarious to tap me on the shoulder just as he was about to disembark by going down the stairs. I wish I'd given him a big shove to help him get to the door a bit quicker - preferably when the bus was still in motion. But I thought better of it.

At times like this, I would happily open a window from the top deck and then tip a large bucket of puke all over them just as they were getting off. I pray hard for the day when some genius scientist finds of way of breeding humans that come with chip and pin mouths that must be activated by authorised personnel in public spaces.