Are we really sleep walking towards a police state?  Britain has by far the largest number of cameras in the world with an estimated five million in public and private hands.  That's about one for every 12 people.  Of course it's only to watch the bad guys to keep us safe.

Is it that the population is being conditioned and moulded to get us to accept giving up our freedom and rights by accepting that a controlling and surveillance society is normal and just the way it is and has to be for our safety and well being?

One of the most popular programs on UK and international TV is "Big Brother".  It gives the message that to live under conditions like this is OK even advantageous, the public audition in there 100s of 1000s to try and get in to be watched 24/7 and controlled to every point of their lives.

Britain's network of CCTV cameras as a deterrent... 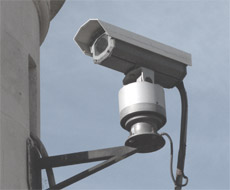 A dumbed down population is less likely to have the intelligence or open mindedness to see what is happening.  Who would be the easiest to control and less likely to protest?  An intelligent, articulate, ambitious and well informed population or one that spends their time wrapped up watching daytime TV.

It seems a long time since the concept of Big Brother sounded dark and menacing rather than part of light entertainment.  But when the cameras are turned on the authorities, they can show uncomfortable images.

Do you see Britain's network of CCTV cameras as a deterrent to criminals, or an invasion of privacy?  Being watched is OK yes?  It must be if you do it to others.

I find it very worrying and disturbing that more often these days when you tap into a search engine the name of a business or corporation, that business or corporation wants to know your location. Why do they feel they have that right? More and more we are tolerating big brother intrusiveness from big business that we have never tolerated from government. I feel the younger generation needs to awaken to this.
05/09/13 Wilhelm
-2

Police state ! I hear that the police were upset about the cuts - ahhh well I'm sure over the years enough officers have pinched a thing or two on various raids , cash , watches & jewellery .that's what happens when you abuse the system ,David & Nick have no intention of letting you guys off the hook .Lets be honest the police & CPS waste £1000s on malicious prosecutions & it just got tougher all round .Maybe they will think twice when trying to fit someone up .On bbc1 I saw a documentry they know let out their council house on the sly - another example of abuse .
16/05/11 Take notice -
0

With all the cameras they have - they still don't review footage I nearly got fitted up for a crime I didn't do . When my Lawyer a certain Mr Khan put them under serious pressure to provide all the CCTV from the location - guess what they withdrew the case -only after 6mnths of making my life feel like I was in hell.
No sorry !and the ipcc another bunch of twits ! They hate to upset the police !
Cameras are setup to cash in on parking fines .
13/05/11 Big d
-10

Lol, we all know the police are corrupt - you will be shocked at how drugs come onto the streets & how Money talks in their world .they have let's us down :(
Stephen Lawrence , Ian Tomlinson , John charles just to name a few .
We must not ever trust a police officer - they pick and choose their cases & if they don't like the sound of your name , well they will try their best to mess your life up.
As I keep saying body cameras are a must & that should put a stop to their corrupt practises!
And more legal aid do you can get justice !
13/05/11 The Jedi knight
-9

The 7/7 bombing happened because MI5 didn't want one of the men's mother to meet the Queen and teach her a valuable lesson about meeting foreigners, not because they wanted to turn this country into a police state.
02/02/11 ??
-3

The conviction of firefighter Simon Ford who helped rescue the victims of 7/7 bombing was meant to disperse rumours that the 7/7 bombers were set up by the intelligence service. He was a drugs runner at the time apparently.
01/02/11 law
-10

It's those who are greedy who make it easy for this country to be turned into a police state like the July bombers. They were tempted by a very substantial financial reward for undertaking a drugs run set up by intelligence service having absolutely no idea they were carrying bombs in their rucksacks. They definitely rushed into a trap that cost them their lives taking with them the freedom and democracy this country had.
01/02/11 beware of entrapments
-13

"The most common characteristic of all police states is intimidation by surveillance. Citizens know they are being watched and overheard. Their mail is being examined. Their homes can be invaded."
Vance Packard
31/01/11 DSG
0

"If you've nothing to hide you've nothing to worry about" is the catch-phrase of the dictator, the oppressor and the inquisitor, and it's also the mistaken refuge of their short-sighted, unimaginative victims. Twentieth Century history teaches us that it's those who have nothing to hide who need to worry the most. Those that do have something to hide usually have the sense to keep their noses clean while the rest of us rush headlong into the trap.
08/12/10 DSG
1

You can’t have a successful police state without disarming the public. And that includes disarming them in every way possible. Sad, pathetic England is well on the way toward that scenario. The general public, except for the violent criminals, are disarmed. And the police focus much of their activity toward the general public not the real criminals. It is both much safer for the officers and general more lucrative for the fines they collect for a plethora of petty offenses used to regulate the average person into submission.
29/11/10 DSG
-3

Oh,and if I can't look through your personal belongings Gainsborough lad,do you have something to hide that you don't want me to see?
27/11/10 DSG
-5

What's next Gainsborough lad? You propably want CCTV to:

Nothing to hide/nothing to fear is a specious argument and one beloved of police states everywhere. Your insistence that anyone who disagree with your view must have something to hide is very chilling.

I don’t want to be watched everywhere I go. Those who man these camera centres will often target those who look “different” or suspicious to them when seen through the filter of their own prejudices. Some one with a dislike of black people will consider them to be more likely to commit a crime for example.

I used to work with someone who was a total Goth – he wore all black, had purple hair and wore black eye make up. He is was completely honest and held down a steady job but he was followed everywhere by store security guards who made the simplistic judgement that someone who looked , to their eyes, so outlandish must be up to no good.

He could have hired himself out to shoplifters as they were probably boosting everything they could grab while the guards were standing about a foot from my friend and following his every move. It did not seem to occur to their tiny minds that someone who wanted to get away with shop lifting would try to blend in and look nondescript but people who like power over others are rarely that bright.

We have a right to some privacy, to go about our business without being watched from the moment we leave our homes. I accept that shopkeepers need to protect themselves from shoplifters but I object to being under surveillance in the street or when I am having a drink or a meal. This does not mean I have something to hide, only a warped mind would think it does.

The real trouble makers usually make sure their faces are hidden by baseball caps and big hoods. It is the rest of us they are watching.
26/11/10 Guess who
1

The discussion is over when people stop posting.

Each year in Britain about 7 or 8 children are murderd by strangers but the number of children murdered by their own parents or step parents averages out at one every week.

Perhaps Gainsborough Lad would accept CCTV in every home in which a child lives in order to protect the innocent? If the end justifies the means and there is nothing to fear if you have nothing to hide then surely this would be a good idea.
26/11/10 Guess who
-9

CCTV only boosts the barbaric mantra "guilty until proven innocent",but if I have nothing to hide...
26/11/10 DSG
-5

Your information and personal data on servers