I do a lot of my own cooking and I particularly love baking my own cakes, biscuits and bread.  But I'm getting heartily fed with Americanisms and other U.S.  ways of doing things being foisted upon me.  If I wanted to say diaper, not nappy; purse not handbag; pants not trousers, or eat pancakes with maple syrup and bottomless cups of weak, tasteless coffee for breakfast instead of eggs, bacon, toast, marmalade washed down with a good old English cuppa, I'd go and live in New York not London.

For example, whenever I search for recipes on the Internet, or in books that are sold in English book stores, I'm increasingly finding that the ingredient measurements are in American cup sizes instead of metric measurements or better still, my beloved and much preferred imperial measurements, which are as extinct now as Aztec bars, Omo and dinosaurs.  What on earth is a 'cup' anyway?  Cups, as you know, come in all shapes and sizes; they're not a standard size.  So how much is a cup of flour for example, for cooking purposes?  A tiny espresso cup or a flippin' great mug? 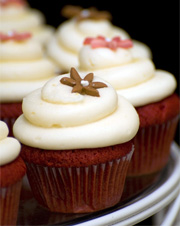 I suppose there must be a standard weight measurement for an 'America's cup', but that's not much help if I'm having to translate a cup, a half cup a quarter cup into a measurement mode that I can identify with so that I can weight my ingredients more precisely on my weighing scales so that my cakes actually do rise like the phoenix from the ashes instead of winding up like round slabs of burnt biscuit and heading straight for the bin.  So why don't cookbook writers print comprehensible measurements in the first place instead of forcing me to translate what to me are meaningless American cup sizes.

Now that I'm back home in good old blighty and isn't the weather dreadful at the moment...etc..  I am reminded of one of Agatha Christie's mysteries, where Miss Marple quite rightly says over afternoon tea at Bertram's Hotel, when her companion tells of a recent trip to America where she was served 'muffins' but not English muffins as we know them to be: split unfruited teacakes, toasted and spread with butter; instead they were large blueberry cup cakes (like those awful spongy things you can buy in Starbucks).  Miss Marple responds reproachfully' "Well, well, the Americans have a lot to answer for."

I no longer mourn the passing of pecks, bushels but cups well really and even a 'stick' of butter they are quite mad. There was an experiment with a bag of flour a cup and some scales. Fifty people measured a cup of flour and each cup was weighed not one was the same. Boycott books with cup measurements or write ours for the Ameticain market in bushels packs and gills!!!
17/10/20 Gargpyle
1

Metric measurements are the only sensible way, as has been pointed out they are consistent so using one cup in one country and another size elsewhere is a weird way to measure anything. Cups are ml measures so easy to convert American cups to any other measurement.
More annoying to me are recipes made up of measures and weights, eg 2 cups of flour and 150 grams of sugar. The only sensible way is to use one measure, ie either cups or weights so I have weighed a cup of flour, cup of sugar etc so if I want 2 cups of flour I either weigh or use 2 cups. The only time I mix measures is with small 'spoon' measures, ie I don't want to weigh a tsp of salt or 2 tsp of paprika. So basically I use whatever I find convenient.
I am 'Brit' but after living overseas for many years I am bemused by people in the UK always wanting to convert everything, we buy petrol in litres but I know people who still apply some formula to convert the litres to gallons and work out mpg.
What is that all about??
18/02/13 artuk
-5

However you miss the point of the "cup" system. The size of the cup you use doesn't matter, as it's about the RATIO of one ingredient to the other. This means you don't have to use scales etc, which makes life easier. Metric is probably better, but cups have their advantages too. Unless you want an exact amount made...
07/09/12 matt
-1

The cups system has it's strengths. My wife is not a great cook but she can cook really well using this system. If it works for her then I'm okay with it.
09/04/11 Freddie
-8

Has anyone noticed that the mentioning of Imperial measurements on TV cookery programmes seems to have been banned. Even Delia Smith has sucommed to the metric system. What's so taboo about pounds and ounces? We've been using them in this country for thousands of years. And where did the Imperial crown go on the glasses in the pub? It's been replaced by letters CE which has something to do with Europe I think. These small 'British' things are slowly disappearing. It's our heritage.
25/02/11 PoorOldEngland
-17

Hey, just FYI... The 'cup' as a unit of measure is British in origin and is widely used across the Commonwealth - Australia, NZ, Canada, etc... (all countries which adopted Metric in the 60s and 70s and define a cup as 250mL) The difference is that that Americans define it differently (as they are want to do with spelling and various other volumetric measures). British 'cooking by weight' is a relatively recent fad, likely imported from the continent, mid-twentieth century. If you want to be properly British, use a measuring cone!

As an avid cook, and a Canadian living in the UK (studying toward a PhD in food), I use both systems. The weight system is great for baking, especially with digital scales, but a faff for a lot of other things, like banging out a pot of porridge in the morning (1 cup of oats to 1 cups of water).

I was looking for some puff pastry recipes yesterday, I already had one but I wanted to check a few to get a feel for variations on measurements because I found Gordon Ramsay's one a bit buttery for my taste. On a side note, why do so many big cooks go mad with the butter on everything?

Anyway, there are so many recipes that use cups instead of grams and I'm frequently reaching for the back button. Another thing are these sticks of butter? What on earth is that all about?
22/12/10 Margaret
-14

Well, hello...not sure if your rant was more on Americanisms or just the annoyance of measuring ingredients for your cake. But, to answer your question of "what is a cup" it is 8 ounces. Oh, but I guess you'll have to figure out what 8 ounces are, right. Maybe I wasn't much help after all. So sorry.
16/12/10 Lady of USofA
-14

I have loads of American recipe books and yes, the cups thing annoys me too. Not only do you end up with more bits to wash up, but if you've just used your 1/2 cup to measure honey (or butter! Why on earth do they even use them for butter when it's so messy!!!) and then realise you also need 1/2 cup flour, for instance, you have to faff about washing up the cup before you can go any further.

Not only that, but there can be big differences in volume according to how you measure, ie if you spoon the ingredient into the cup, use the cup as a scoop then level off the top, scoop and pack the ingredient down etc. Very inaccurate and stupid system. I tend to scoop the ingredients into the cups then make a note of what the resulting weight is so I don't have the same hassle the next time I want to make the recipe.

As for what a cup size is, an American cup is about 237ml, but as long as you use the same set of cups for all your ingredients, everything will still have the same proportions so the exact size shouldn't matter too much.
16/12/10 JB
-19

Ig could not agree more with the cook who complains about american recepies who quote cups as measuring devices,apart from from being utterly stupid, there is no standard volume size for a cup.they are the same race of people who sent the hubble telescope into space then discovered it had been manufactured to metric diamensions but were trying to positioning it to imperial measurements.still what can you expect from a nation which is still talking about barrels.the british are just as stupid,according to us there is not measurement under 12",thats where I started with my first lesson on maths.apparently one of our king? henries started a system with an ear of corn,calling it one eight.go meteric you bums.
16/12/10 Physic
-18