I must admit to not having paid too much attention to the news in the last week or so.  Having been job hunting myself for quite a while now, I've kind of had other things on my mind and not really had the time.  However, I had a few moments too check the headlines this morning and what I read there put me off my breakfast.  As a British worker, even though I don't work in this particular industry, I was left feeling more than a little betrayed.

In case you have also missed the news...  Hundreds of workers across the country, mainly at oil refineries and power plants, have been protesting about the use of foreign workers at the Lindsey Oil Refinery in Lincolnshire.  Total, the French oil giant who owns the plant has awarded a 200 milion contract to Italian firm IREM to construct the new HDS-3 unit at the site.

Well quite frankly, employing foreign workers when there are suitable british workers out there doesn't sit well with me even when the economy is booming, but we're in a recession now and I think that fact alone makes all the difference.  Perhaps it's far too easy for companies in the UK to hire a foreign workforce and there should be insentives for employers to choose British workers intead.  Make it so that employing the native workforce is the path of least resistance?  There again, Total isn't exactly a patriotic British company so why should we expect any loyalty there? 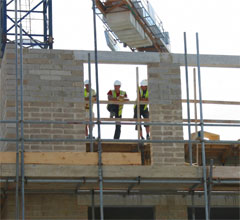 I don't think that it would be right to force companies to employ British workers and there are some cases when foreign specialist skills are needed.  Come to think of it, there are few people out there that would say British workers are lazy, they're not as good and they cost more than foreign workers.  Okay, some of that might be true, but for every slacker out there there are probably hundreds or even thousands of perfectly willing and competent workers waiting to fill his shoes.  The foreign workers we see here aren't the dead wood.  They're the ones that go the extra mile and work hard.  We have people like that here too and I think that they should be given a chance.

I suspect there's no right or wrong answer in all of this, there's just a feeling of great injustice where British men and women don't have jobs where perhaps they should.  I'm also pretty sure that our bumbling fool of a prime minister isn't going to do anything to help in any way whatsoever.  They can hold urgent talks with industry leaders and be as optimistic as they like, but it's just too little too late.

So if you're out there on the picket lines this week, you have my full support in all this.  Oh and another thing, I for one, will not be stopping to refuel my car at any Total petrol stations on my way to the Jobcentre!  It's a small thing I know, but if enough people did small things maybe big companies and governments would pay attention.

Foreign workers are not always better workers. They might work faster with nose to the grindstone but often they are taking short cuts and they do not have any understanding of many British accents so if your regional accent is strong they won't be able to understand you. We hear strong regional accents on TV and the radio so get used to them. Ask them for directions and they don't understand you. They work like robots so just do their job and not the little extras and nuances. I find many of them to be abrupt quite frankly.
20/03/17 Lemsip
2

I am sorry for what is going on at the moment. this is what annoys me about this site the admin seem to ignore things when more than one poster starts attacking another. Any one on one is OK in my opinion, but two to one I always consider to be unfair.
10/10/14 boblet
-1

The posts directed at me were nothing but insults. It would be disingenuous to say otherwise.
10/10/14 Zanni
0

PS.
The penny has just dropped!
You are Mrs Ponsonby Smythe or a Guardian reader
10/10/14 Stalag14
0

"Samson and Stalag
My my, that was a lot of dummy and rattle throwing. Hope you feel a lot better now after the personal attacks, none of which had anything to do with what I said."

ZANNI What the F***K are you on about, it is very rare that I attack anyone, please feel free to quote the comments from me that you perceive as a personal attack, are you paranoid? neurotic?
10/10/14 Stalag14
0

Sobering thoughts indeed. I think it can be safely said we all abhor any form of abuse be it to children, women or any other vulnerable group.
At least one of us has been a victim in the past - I do not say that lightly, for reasons that would become clear if you knew me better.
No one meant to offend by making jokes, and we are all, more or less, fighting for the same things in life.
That is Collar's single, allocated post for the day.
10/10/14 collar
0

So sorry about what happened to you as a child.

It's depressing and worrying how widespread it is and that the authorities so often allow it to continue. In Rotherham it was because the cowards were afraid of being called racists if they did anything. With Jimmy Saville and other perves at the BBC, it was because these people were rich, powerful and famous. Saville's activities were known at the BBC and known by the police.

The reasons I will only plough a straight furrow in life is, I know about life.
All about life.
Try & influence or subdue me with Doctrine, Religion, or Superstition & I will give you the fight of your life. I am British.


Fingers crossed for post three.
I love the weaker sex. In the main straight arrows fly from female archers on this site.
09/10/14 boblet
-1

People who groom children are sly manipulative b@st@rds. People who's job in welfare is the care of the young, old or mentally disturbed are not always ideal. then the ones who start out as ideal become hardened. the best thing that ever happened for victims was when the no blame culture was finally attacked on behalf of victims. Turning a blind eye is no longer an option. A park keeper named godson attacked me and I subsequently found out years later through face book, that he had attacked other pupils of my school. The teachers new nothing about it. I must go now I have just seen a pig fly past my window
09/10/14 boblet
-1

In some respects this rationing system has had a beneficial influence on me. It has slowed my reaction. Shooting from the hip is my nature, now on the gripe I must take aim & fire deliberately, tempered with economy. I am also thankful that I do not have to sieve through the welsh quagmire, panning for nuggets of sanity. I assume they have fallen foul of this new edict as well. One blot on the landscape seems to be the absence of collar, his ridiculous posts had a certain.. I am not sure what? That is one of the drawbacks with blunderbus censorship. Admins nature is to only converse with folk who are pliant. makes his censorship lob sided. If you follow?

Normally I would post at this stage but the outcome is uncertain. So I will take a hike round my estates then come back to it.

Here I am back in the saddle I will be going to an auction later. My gripe is that the auctioneer is another control freak. The penny has not dropped yet with him. He is a Yorkshireman trying to illicit fair bids from Yorkshiremen/women & "Never the twain shall meet" I find it highly amusing, Tony the auctioneer berating the stingy bidders & the bidders clutching their purses with ever whiter knuckles. It is similar to Old Widnes/Runcorn in that respect the menfolk tote purses. It would be a paradise indeed if the auctioneer was English. As it is, long Yorkshire pockets & short Yorkshire arms gives me an edge.

No way. I have been given the big red again.

My my, that was a lot of dummy and rattle throwing. Hope you feel a lot better now after the personal attacks, none of which had anything to do with what I said.

If you had made a self deprecating joke about rarely getting lucky these days I would never have even noticed but you didn't , and you didn't say you would like to be "approached", you said you would like someone to "groom" you.

The subject being discussed was abuse of children in Rotherham. Grooming has a particular meaning and it isn't being approached. You knew this when you made the remark.

Grooming is about exploiting a child's innocence, gaining the trust of children who are often neglected or already abused, pretending friendship and interest, giving of gifts and then undermining a sense of self worth and other manipulative manoeuvres such as threats, intimidation and bullying that gradually leads to physical contact and se xual abuse.

I know someone who was groomed and systematically abused as a child. It has wrecked her life and trust in people. She has never been able to have normal relationships or have children herself.

I don't know why my comments touched a nerve here with Samson and Stalag, why they felt so threatened that they had to go on the attack.
09/10/14 Zanni
1

My Dear Sampson,
I made sure to make room in my busy schedule to post today.

I should not be surprised really as you rarely come out of your potting shed and venture forth into the real world.

Judith is right. it was female social workers that were ignore by their male bosses when they raised serious concerns about these poor children that were being abused by a gang of men.

There are always going to be some like yourself Sampson dear who will try and put a woman down and when she objects make excuses for what you said.. by later saying that it "was just a joke"

"I am convinced that there is a section of our society that actively tries to be offended by almost anything." Samson

and all the other narrow minded prats out there.

They don't just "try" but are offended by everything that does not fit into their warped outlook on life, or their agenda.

It's Daddy Long Legs season at the moment where I live. One came into my house last night and exploded. I'm guessing it was a Jihadi Long Legs!