I am getting so tired of people just pushing me out of the way when they need to get somewhere.  It happens on trains where people just barge into me and knock me with their luggage or bicycles.  You see it in supermarkets where the staff push past customers to go on their breaks or shove people aside in the queue to get to the till.

This evening, I was just about to get on the bus when a man came racing in front of me - just as I was stepping towards the bus - he actually ran between me and the bus door!  It was near the train station so I assume he was late for his train.  What an idiot though.  If I had moved forward a second earlier, he would have knocked me to the ground, considering the speed at which he was running.  I could have ended up in hospital just so he could catch his train.  And so it goes on and on...the lack of respect for other people. 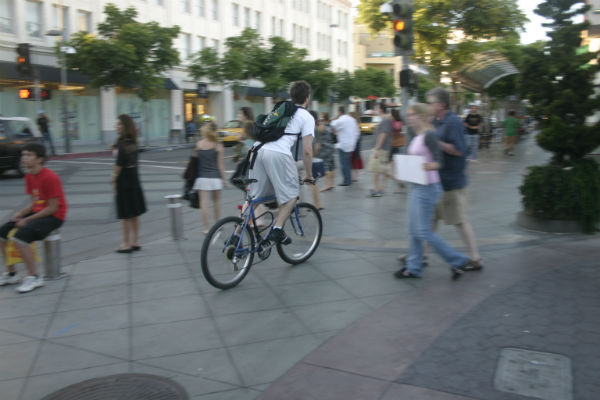 In the past, nearly everyone used to say "Excuse me please" or ring their bell if they were riding a bike.  It wasn't just politeness, it also gave people warning that someone was trying to get past.  You rarely hear those words nowadays.  People seem afraid to actually talk to someone else.  It would appear that it is far easier to just shove them out of the way.  Or, maybe take a chance that you can run in front of them and they won't move.  Or that you can go round them on a bike, with just a couple of inches clearance and with a bit of luck, they won't move into your path.

You see this a lot with teenagers cycling through the town centre at speed, weaving round pedestrians and narrowly missing them.  They apparently don't care if they run into someone and that person gets hurt.  I'm furious that people take chances like that - people could be (and sometimes are) injured by this kind of recklessness.  Why not slow down, give people more space or actually ask to get through - say "excuse me please" or ring your bell?  It would make life in Britain just a bit more civilised instead being a place where the culture of disrespect seems to have taken over.

It's not just teenagers, it's all ages. Older people got eventually fed up with disrespectful teenagers and have retaliated. Now everyone is rude to each other. 2 wrongs don't make a right and look at the situation now. People tend to not move at all unless the magic words get used, if you don't say excuse me, you don't get and if enough people get hurt in the process, a social initiative has to take place. The more you begrudgingly oblige for others self serving convenience, the more you enable them and the problem will continue.
30/03/15 Mushy
0

I agree with most of what the original poster is saying except the part where s/he says that cyclists used to say "excuse me" or ring a bell if they pass you on a pavement.

It's only been a matter of about 10 years that you see cyclists on the pavements at all! They never used to ring a bell or say excuse me as they never "used to" be there at all. Nor should they be.

Agree with the rest about manners though.
03/11/14 Pedestrian Pat
0

And of course, if you do know where the person actually is and you tell them, they turn on thier heels towards that direction, their is more chance of winning the lottery than getting a thankyou.
02/08/13 doyouknow?
4

Has anybody else noticed that when you are at work and somebody who is looking for somebody else will approach you and say , for example, where's Len? Or where's Henry? They do not prefix the question with the all important, do you know? Under the assumptions that you are (a) psychic and (b) you have a godlike access to all universal knowledge.
02/08/13 doyouknow?
3

You are so right - it's a symptom of our times - over populated cities (like London), over stressed people and a "me" culture. We are becoming like China where we swarm around like ants in an ant colony. I too am sick of the eco centric, self-absorbed world people seem to live in. The best we can expect these days is to be batted away like a pesky fly if we get in their way. Supermarkets bullies, rushing past you as soon as a new till opens up, and then tutting annoyedly if you happen to be there first are the worst offendors...
07/07/13 Tigerbright
8

My pet hate is supermarket bullies. What is it about people who turn into monsters when behind the wheels of a trolley? Recently, I put a few bits of shopping in a basket and was jostled out of the way by a chavette, complete with massive bum and bulging blue leggings, and a trolley! She ordered me to move and as I tried to manouevre round another shopper, she jabbed me in the bum. I loath these trolley bullies. They are the equivalent of 4 x 4 drivers who think pedestrians are beneath them - literally!
22/06/13 bruised by trolley
1

I agree with the fact that people seem afraid to speak to each other. I know it's not quite the same as pushing someone but I've noticed rudeness on sites like eBay. You sell something and post it to a buyer and feel that everything has gone ok. Then the next thing you know, they've left negative feedback or opened a case against you! This is without any warning or message saying that there is a problem. So rude. Again, poor communication skills.
22/06/13 anon
6

I think it is due to upbringing and varying age groups can act this way. A friend of mine was walking to get onto the pavement and a middle aged women nearly ran into to her on a bicycle while mounting the pavement! Then had the nerve to make a rude comment.

I've had rude people bang into me in an aggressive manner while walking along a busy street.

And a more positive note, I've had a teenager open a shop door for me in the past as he walked with his mother, and I thought well done to Mum for bringing the lad up the right way.
27/05/13 Very Wary
5

@Gemma Riding on the pavement may actually be legal. Our local council have put up signs indicating that the pavements on the newly re-routed road through our town areactually for both pedestrians and cyclists.

Therefore it may even be safer to walk on the road than on the pavement!

If the schools taught Cycling Proficiency as they used to then we all (pedestrians AND cyclists) might be safer.
27/05/13 Charmbrights
-3

Goodness, this article is right!
It just seems that people think of themselves only regarding these situations... but alas, one can only hope to set a better example, and hope others follow.
25/05/13 DSG
-6

I was just coming out of a shop this evening and a woman with a buggy just barged straight through the doors into the shop and everyone just had to scatter to avoid being run over! She carried on as though nothing had happened even though there were four people who had hurriedly got out of her way.

It's the same thing with buses and trains - people try to get on before other people have had a chance to get off. You know what it's like, you arrive at the station you want to get off at and there is a impenetrable sea of people who WILL NOT move to let you through. All just so they can grab the best seat. What has happened to Britain?
23/05/13 reluctant passenger
6

I find sometimes that when I want to get past someone they ignore me when i say excuse me, Either people are going deaf, or as your saying, they don`t have any manners.
18/05/13 hairyfairy
11

Don't you think that up bringing has a lot to do with it, Scroats breed Scroats so if one generation does not teach basic good manners then its passed down from generation to generation.

Also maybe when immigrants move into our country they need to take and pass an exam in speaking / writing the English language and learn our customs, after all to move to certain other counties don't you have to take an exam before you get citizenship.
17/05/13 One well mannered English lady
-6

Stalag 14, You were treated to a glimpse of a bygone era when men and women were the backbone of this country. God only knows what state the UK will be like in another sixty six years. To think those people gave their lives for the likes of what is called "the new generation".
17/05/13 Jethro
4

Good gripe. I am not exactly small, but sometimes I think I must be invisible. Whenever anyone tries to walk right in front of me I say "Oops! I must have my invisibility cloak on today". That usually gets a "sorry" response. If I hold a door for someone and they don`t say thanks I either say "Thank YOU" or "You`re welcome". In shops I hate it when the cashier says "That`ll be (whatever amount)" no Please and no thank you when you give them the money. So I always say it for them. It was a law that all cyclists had to have a bell on their bikes, but it must have fallen by the wayside, because I haven`t heard a bicyle bell in YEARS.
17/05/13 Ben`s Nonna
1

Inconsiderate people in a public library

People that won't move over on a narrow pavement