Twice recently I have failed to get in to see the film of my choice on Orange Wednesday.  Tonight's experience was worse than ever though!  We had to queue along a main road to get into the participating cinema car park.  I then had to leave my husband to drive the car to the furthest point of the overflow car park while I joined the ticket queue forming outside the cinema.

we were delayed getting into the cinema...

It was pouring down with rain (and I mean REALLY pouring!).  Eventually we got to the door and were directed to a queue for our cinema tickets.  When we got to the front to buy our 2 for 1 tickets to see The Taking of Pelham 1,2,3 we were 5 minutes late.  We were told the film had already started as it had no trailer!!!  How many films have no trailer these days? 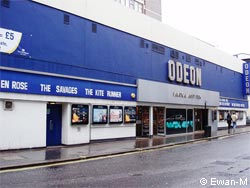 The real problem and the reason we were delayed getting into the cinema was the hundreds of people queueing for Harry Potter showing on two screens at the same time.  This wasn't helped by the cinema staff who did not have the sense to form separate queues so that other people could see their films too.  We didn't go in to see our film in the end because I hate missing the start of a film, the only thing worse would be missing the end of the film.

We did arrive at the cinema with plenty of time to spare.  It was just unfortunate that Orange Wednesdays are now very popular, perhaps more so on a wet night and at the same time the Harry Potter crowds were out in force too.  This happened before when we tried to go and see Slumdog Millionaire just after it won all those Oscars.

This may have been said before on this gripe so I apologise if I am making the same point as many before me. Simple answer... If you have an issue with orange wednesdays being so busy and therefore having to que, have you ever heard of Tuesdays? Or if that is an issue, how about Thursdays? Or maybe Mondays?... I think you get where this is going.
20/12/11 SuperHack
1

You're a complete and utter turd. Pointless reply. You don't like gripes then don't visit this site.
05/03/10 chris
10

And this months prize for the most pointless gripe goes to ...... deskjet!

Oh no! I've missed a whole 5 minutes of a film because I wanted a free ticket like everyone else!
04/08/09 Name or nickname
7

See they have the scumbag in custody who allegedly through the bleach over that poor woman in Leeds.
03/08/09 deskjet
-11

Doesn't it actually cost as much for two people to get into the cinema (except Orange Wednesdays presumably) as buying the DVD anyway?

If it does then, as Congo says, you'd just as well wait and watch it in the comfort of your own home and have things like subtitles and extras too!
01/08/09 grumpyoldwoman
-5

Yeah I agree with Congo, much better to wait a while for the film to come out on Sky Box Office or DVD. Some of my friends insist on going to the cinema on the opening night of a film as well; I really don't see the point. Too many people, too much noise and it costs too much. Orange Wednesdays are half price but there's twice the people and twice the noiuse. No thanks!!
31/07/09 Siobhan
4

So now we know but I still think I will not bother with the inconvenience of cinemas. They have had their day when there was little competition. Much better to watch at home on DVD and plasma TV, glass of wine in hand and no coughing, sneezing, popcorn crunching, smelly plebs to suffer.

And, yes grumpyoldwoman you were right to avoid the Hitchikers remake - it was wholly awful.
31/07/09 Congo
-5

Well Congo, I wondered that too! I thought it might be like "dress down Friday" but everyone wears orange clothes!

You're right about the remakes, I think the "money men" who rule the roost these days go for something "safe"; if it was a hit the first time it will be again is the thinking. As for the new "Hitchhikers", I decided never to see it when I saw the cast (Martin Freeman may have been ok) and the new, altogether too cute looking, Marvin!
31/07/09 grumpyoldwoman
-8

What the hell are 'Orange Wednesdays'?

And why waste time and put up with all that inconvenience simply to suffer a flashy, poorly directed rehash of a very good film? Hire a DVD and see the original and better effort.

There have been far too many of these cynical and lazy attempts to cash in on the reputations of classic films - Italian Job, Wicker Man, Sleuth, Get Carter, The Fog to name but a few.

Excellent films in their own right pointlessly remade as inferior copies.

And don't even start me on 'Hitch Hikers Guide', what an absolute PC emasculated travesty that was.
31/07/09 Congo
-9

Youthful Griper, just looked at the news story. If they catch these scum they should pour bleach over them so they know how it feels.

Aren't the cinema staff supposed to be there to stop customers from being noisy? Or am I going back too far into "the good old days" when people knew how to behave in public? Hardly ever go these days; but with what they charge to get in I would have thought they could employ armed guards to make sure everyone behaves!
31/07/09 grumpyoldwoman
-3

Personally I'd rather stay home and watch the telly than sit in a cinema with a load of whining kids. Either that or go down the pub.
31/07/09 MA
-5