It is not only the UK that is full of unruly children.  I've seen exactly the same thing abroad on holiday too.  I remember an occasion when I was shopping in New York and I saw this American mother and her grandmother with five young children running and screaming in a clothes shop.  They did nothing to control them and let them run amok when I was buying clothes.  I wanted to confront them about this, but my mum said that the children were only misbehaving because they were 'tired and bored'.  They were certainly not tired if they had the energy to run riot in the shop!

When I visited Lisbon I saw the same kind of unruly behaviour.  I was at a restaurant and this kid was running around and wandering away from his family.  They did not appear to keep an eye on him and were completely oblivious to where he was and what he was doing.  To my surprise, nearby diners and staff did not seem to care about him treating the place like a playground either.  In fact they were actually playing with him instead of bringing him back to his table where he should have been eating with his family. 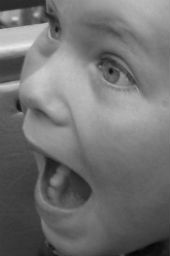 My point is, staff and other patrons at restaurants are not babysitters even if the place is family oriented.  In this instance his family showed no consideration towards the other diners by not properly supervising their child.  It wasnt an isolated case either, because as it happens there was another young Portuguese brat in this restaurant who was also causing ruckus.  He was screaming, crying and would not stop yapping.  I suffered an earful of his racket.  As usual, his family failed to control him or show any consideration to other diners.  I thought the whole point of going out to a nice restaurant was to have pleasant time and an enjoyable meal, but this was more like happy hour in a creche.

I think all places need to have zero tolerance towards children who behave like this in public areas.  Shopping centres and restaurants are not playgrounds in any country!  In my opinion the Western World is becoming too soft on badly behaved children these days.

If Fred E's kids copy him they obviously must be as thick as a housebrick baguette and spout total gibberish to all and sundry.
10/06/13 Maureen Philkins
-2

Kids do always copy the behaviour of their parents. Whatever the parents are like the kids will end up the same. My kids are fantastic.
07/06/13 Fred E
-7

Well, part of the problem is if you do try to control your children at least where I live you'll more likely than not get accused of being a child abuser. Personally, I'm glad I decided not to have children. Most of the parents I know don't seem very happy.
07/06/13 Not a Parent
-5

I agree. If the parents don't teach their children to be ruly in public areas, someone have to do, because the children will grow up and will reproduce the postures of their parents and more kids will be unruly.
18/05/13 LBA
-1

Chavs, the bloated underclass and neanderthal types don't educate their kids because they are clueless themselves on how to behave in their own homes never mind in public. Everywhere is their playground and 'stuff everyone else'. They usually are glued to soaps and reality tv, wear tracksuits but have never done any exercise in their lives, have loud grating voices, smoke like chimneys, play loud music at home or out, swear incessantly, and think their kids are sweet angels. These people are a blight on society.
15/12/12 Needler
3

We were eating breakfast in Tesco last week when a bunch of Chavs walked in ordered food and sat down, did the kids sit down? no they ran riot all over the place and used the restaurant as a playground, an accident waiting to happen and nobody (staff) said a thing, no doubt because they knew if anything was said they would be subjected to a torrent of abuse.
02/12/12 Stalag 14
4

I too find it amazing (particularly in the 'chav' element) who dont even bother to discipline or correct their children - running riot and causing aggro for others, including other well behaved children...

These brats need a slap - we are not talking about knocking 10 bells out of them -just a corrective small slap on the back of the legs...

Thank God that I have not got any kids, I just have not got the patience, some of them really are little sods, if I had them, I would put them in care !!!
01/12/12 eliminate brats!
6

i don't see the problem! Are they causing trouble for anyone? If not then what's the problem?
28/07/12 pinkamena
3

Has anybody else noticed that most the policy making do-gooders( and by this I mean the top dogs) that spout off about intergrating and educating the neanderthals and giving them support (ie more benefits), are in fact largely on the public purse or quango funded. Also, these do-gooders never live close to the problem, rather, tucked away in a nice quiet corner out of town. Nice little earner for a problem that is getting worse year by year.
31/03/12 Jethro
4

Yep and its getting worse by the day, I think in a few years there will be an elite of providers, engineers, teachers, doctors etc and a mass underclass who are good for nowt but consuming resources and breeding more of their type.
Just like it is now but more so.
31/03/12 Ape-man
5

Some Bloke, Sorry, but I just had to add something to one of your lines. " There is a social NEANDERTHAL underclass in the Uk which is huge"
31/03/12 Jethro
17

This problem may occur in other countries as well, but it is worse in the UK than anywhere else I have been to (and I have lived in four different countries). There is a social underclass in the UK which is huge - these people have no interest in working towards a positive society.
31/03/12 Some Bloke
7

urgh...take your kids to mcdonalds or wherever if you want a child-friendly restaurant. i think even the tiniest bit of behaviour should be dealt with. if diners complain, if i were the manager, i'd take the family out. no second chances. i behaved perfectly in restaurants (so did my sister) but there was the odd occasion of one brat making such a loud, unwanted racket, and it spoils birthday, anniversaries. it's a bit crap now.
30/09/11 hazza
2

Brats. I truly believe children very often mimic their parents behaviour. Any child that is guided, cared for, and shown right from wrong, then that child would behave accordingly.
Sadly a sizable majority of modern day parents are so selfish and inconsiderate, and full of themselves, that they have not the slightest interest in how their own and their child's behaviour effects others. "Out of sight, out of mind". A child needs to be loved, cared for, guided, educated and disciplined so as to enable them to become a responsible adult with a good future. Brattish parents raise brattish children.
04/08/11 Old Timer
4

Yeah Aggree completely when I was the age of most of these brats most restaurants did not welcome children so adults could go for a meal and be able to enjoy it safe in the knowledge that No selfish dysfunctional parent would allow their disgusting loud Brats into such a place so they were pretty much limited to Mcdonalds cos there were no other fast food places back in the early - mid 80's when I was a young child , even supermarket cafes didn't allow them but it has gone far too much the other way now so the only thing left to do is get take out or eat in the evening when it is too expensive for the riff - raff to afford the night prices . Another thing that REALLY pisses me off is how they seem to encourage the little brats in is them letting Kids eat for free the all you can eat buffets are the worst offenders for that so I am now left to either eat take out or eat out at night when standards are supposably higher.
04/07/11 Angry Stevo
3