Crazy sculpture designs and wacky architecture splattered all over the previously beautiful British landscape.  Who do these people think they are?  If these poncy artists and designers need a creative outlet why don't they keep it where it belongs, in a gallery, museum or better still in their heads?

We've got two very striking problems in this country.  A lack of affordable housing (yes, house prices are coming down again - but the price of everything else is going up), and an increasingly decimated landscape and country side - partly due to houses sprouting up and partly due to sprawling industrial estates and shopping centres.  Why on earth do we need fanciful icons, landmarks and sculptures supposedly designed to please the eye dotted around the country?  It just doesn't make sense.  Couldn't the space be better used for something constructive?  How about a nice park for the kids to play in perhaps? 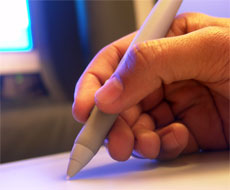 Take for example this idea of a huge white horse 33 times normal sized plonked in a field in Kent, who on earth is in favour of that?  Fair play, it's really none of my business because I'm fortunate enough not to live there but I can't imagine many people going for an idea like that.  We've kind of got used to The Angel of the North and the likes, but this idea is so far fetched it's just wrong.

These so-called artists and designers really aren't living in the real world with real problems.  They don't live in a tiny house, bring in a pathetic salary and basically struggle through each month.  Is a flipping great horse going to make anyone happier?  I don't think so.  Maybe a few nice parks for the kids to play in might make a difference though.  For goodness sake, design something useful and practical!

A very Intelligent Letter,I could not agree more.the "concept" of conceptual art is the concept of parting money from people foolish enough to think a sawn in half sheep or an unmade bed surrounded by used condoms and other detritus is real art.
02/07/09 Mike Pratt
7

"Organisers of the 'angel of the south' sculpture in Kent are still hoping it will be in place for the London 2012 Olympics, despite the recession. Project manager Mark Davy revealed there could be short-term funding problems for the Ebbsfleet scheme. He said he still expected long-term investment to be made in the privately-funded project, because of its stature. And he added: 'The original intention was to get it for 2012, and I hope that's what happens.' A shortlist of three proposals was announced for the £2m hilltop landmark scheme last October.

Err.. hello? Two million pounds for a flipping great white horse in the middle of a field in Kent. Has everybody gone mad or something? £2M could build a lot of accommodation for people that really need it. £2M could help feed people who aren't eating as well as they should (yes, people are malnourished in the UK too!). £2M could do a lot for the NHS too (as long as you take out the clueless managers - that's another gripe!). £2M could be invested instead into projects to get teenagers off the streets and into the workforce. The list of useful things to do with £2M is pretty endless. Exactly who is going to benefit from a big white horse?
10/02/09 Mark
-4

"The team behind Manchester's troubled "B" of the Bang sculpture is to pay the city council £1.7m after it was plagued by safety problems. The 184ft (56m) artwork was unveiled near the City of Manchester Stadium in 2005, to mark the city's hosting of the Commonwealth Games in 2002.

But nine of its 180 steel spikes have since been removed after one fell off." - BBC News

"These so-called artists and designers really aren't living in the real world with real problems. They don't live in a tiny house, bring in a pathetic salary and basically struggle through each month"

Whilst I agree there are many cases of appalling 'public art' - a good example being a great deal of the sculpture trail in the Chilterns, absolute rubbish - I take exception to this part of your argument. I'm a designer in a tiny flat at the mercy of a pathetic salary, struggling every month! We do exist, you know - some of us even have morals and standards. Unlike the Damien Hirsts, Sam Taylor Woods, Jay Joplings and other talentless scum of the (celebrity) art world.
24/09/08 Spuddy
-2

Get in the real world

Thanks to get in the real world 2 for the support. I cannot believe that we are paying for these useless 'contribute nothing to society' art projects when there are pregnant women giving birth on their own in hospital due to lack of funds, women dying in childbirth, babies without incubators, pensioners without heating, young adults unable to obtain mortgages and dirty hospitals. This is all happening while our non elected so called prime minister is a thousand miles away attending the g8 summit telling us not to waste food while he feasts on a 24 course banquet. Talk about do as I say and not as I do. Message to Gordon Brown - clear up your own back yard before you start clearing up everyone elses!
08/07/08 Get in the real world
-16

I agree and consider these people to be self proclaimed artists but, they aren't foolin' anyone. They are stealing valuable space with twisted sculptures of nothingness.

This is what they are, thieves. The precious space they stole could've been used for a few litter bins which is far more pleasing to the eye than their disfigured, failed, half-baked effort.

Get in the real world 2

This counrty does not need any more parks.. The parks that we already have need maintenance.. The park I take my child to has no swings and has not been painted for years.

Thats where the money could definitely go! Most parks are just a derelict area where teenagers go to drink cider.
07/07/08 Get in the real world 2
0

get in the real world

There are plenty of parks already in this country to take children to. How about spending the money on something we all benefit from like the NHS. The National Lottery money should also go into the NHS - Why because it is something that benefits the whole of society , instead of funding small useless art projects etc.
06/07/08 get in the real world
-35

The Angel of the North is there to pray for the souls of the damned, who live in the valleys beneath its gaze.

Those damned because of globalisation, the credit crunch, the loss of their livelihoods because of the mismanagement of the economy by this present government. Damned they were, damned they are and damned they will be.
05/07/08 Glebelands
-2

Well said. I think the word "creative" has been corrupted. A more accurate definition for these people would be "nothing better to do" or "lack any real skill". Or "losers". I hate these sculptures, there's something about them that looks so cheap and forced, and at best they no value. It's as though the powers that be are cluelessly trying to embrace culture.

I fully support publicly funding culture, but instead of giving these miserable "artists" an income, this money should go into making modern buildings more pleasant to look at, instead of these breezeblock monstrosities that are popping up everywhere, especially in our city centres.
04/07/08 Duddo
-8

Hear hear. These new 'art' peices are not even tasteful and cost the earth. A good play park would easily be built with the cost of one sculpture more than likely. Good gripe topic.
04/07/08 topsyturvy uk
0

Compensation for devaluation of property only fair