I like the summer months because I enjoy the sunshine and nice weather, but one thing I can't stand, is getting the lawn mower out to cut the grass every other weekend.  I simply cringe when it's that time again!

Cutting the grass has definitely got to be my worst nightmare because the damn stuff just grows so quickly.  You get the lawnmower out on a Saturday morning along with all the other sad suburban people.  You walk up and down for half an hour with this thing chewing up the turf, punctuated with little diversions as you come across a stone you didn't spot earlier, or to change yet another blade!  If you're lucky enough to own the model with a grass, collection box, then you may make several trips to empty it.

They're never quite big enough are they?  If you have the basic lawnmower then there's a bit of raking to do afterwards.  I think that lawn maintenance is really a load of hassle that a person could well do without on a day of work that is supposed to be for rest and relaxation. 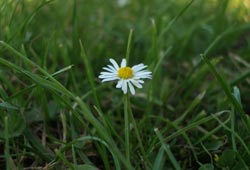 I know some people love gardening and can potter around for hours out there weeding, cutting, clipping, digging and doing all sorts of green things.  It's not for me though, I'd rather be doing something more interesting.  However, you can't escape it because it wouldn't do to let the grass grow would it?  What would the neighbours say?  There would be complaints to the council about that jungle next door.  Don't get me wrong, I actually enjoy having a cut lawn and wouldn't really want to let it go wild; its just that I hate having to cut it all the time and I can't afford to buy a remote control lawnmower.  That would be nice though...  So much better than the Astro-Turf solution!  Mind you, I think maybe my next door neighbour has the right solution, he gets his kid to do it!

On the subject of lawnmowers, what's up with the rubbish they make these days?  You either get the thirty to forty quid hover power thing that eats up blades like they are going out of fashion, or you fork out for an expensive petrol one that does lovely stripes but costs a fortune to service (apparently).  I can't really comment on the latter because I've never owned one.  However, a friend of mine had one and it cost a small fortune to have it repaired and serviced.  He said that it would have been cheaper to buy a new one.

Most people work hard all week and want to relax at the weekend, including in their garden. I'm sick and tired of morons cuttting, strimming, pruning - all noise making activiities - on Saturday and/or Sunday.

The summer months have enough light to get these tasks done in the weekday evenings. The author of this gripe is moronic!
11/06/13 miserablemoaninggit
-11

I can't find an appropriate gardening thread so this comment is going here anyway!

I garden for an elderly relative who can no longer manage the border in front of her flat. I'm happy to do it especially as I no longer have a garden of my own but I wonder why passers by seem to think that the flowers in it are free.

We both spend money on plants, compost, seeds, plant food,tools and plant supports and I spend quite a lot of time and effort in making it look attractive. It's one of the last cared for gardens in what was once a pretty council estate. People stop to admire it and ask questions when I am working.

The people who steal the flowers must see that it isn't public property so why do they think it is all right to just take them and rob the owner and other passers by of the pleasure of seeing them. Sometimes they have just been vandalised as well - flowers torn off and just thrown down, plants broken deliberately. It seems odd to me that people almost resent efforts to make their neighbourhood a better place.
16/10/11 Nonny
-4

Why bother to have a garden? Maybe you best live in a high rise flat where you can look down on the gardens around you.
What is so difficult about mowing the grass? How big is the green space? If you have a mortgage and paid for land and house, why waste the space you have outdoors that belongs to you?

Be proud of your bit of land and look after it. You sound dead lazy.
Lawn looks great when it is mowed and takes very little effort. A bit of gardening won't do you any harm. Just expand your thoughts a bit!
25/12/10 Daisy
-10

Lawns have a finite amount of height, and then they stop. We used to have about half an acre of garden, and I got fed up having to cut the grass every week, so I just left it to grow long. I mowed curvy paths through it, with a large circle for barbecuing and sunbathing, and it looked just great. Much more interesting than just a boring swathe of green. It was full of wild flowers and abuzz with bees. The field mice and shrews loved it.
27/09/10 Nikki
-7

Just let the grass grow! Honestly I cannot see the problem here, if you hate cutting the grass that much, just don't bother! If you leave it grow you will also get more wildlife in your garden.
27/09/10 anon
-9

too hot in florida

Why get upset over it. Hey, right now I am livng alone with my young boys. I have been outside for over 2 hours trying to cut my lawn when it is in the 90's and stinking hot and humid. I'm not complaining, just ready to pass out from this. Get over it everyone or get someone to do it for you. I can't afford it or I would.
21/08/09 too hot in florida
-14

My problem is not with cutting the grass, but with my wife cutting the cheese. That woman can fart a storm, let me tell you.
16/07/09 cut
-6

Lawns are quality, do you ever read and then think a little before opening your trap? Nope? I thought not. See the big thing at the top of the page. Weekly Gripe, hence have a moan if you want to - it's okay to moan here. Idiot.
09/06/09 Connor
-26

Ever thought of getting a patio, getting a life, and stop moaning to strangers over the internet?
09/06/09 lawns are quality
-8

I agree with the latter! DIE LAWNS!! >:( I cut my lawn today and it was so hot and all that stuff! I was suffering greatly. Robotic lawnmowers are the way ;)
29/05/09 Angry Dreenan Resident
-14

My top ten gripes, from retired neigbours to dog owners

Moving house is stressful with all the packing etc.

Flies and bugs in the house during the summer