Im fed up with hearing people (NIMBY's) moan on about mobile phone masts and where they are sited.  If you use a mobile phone and lets face it most of us do, then youre going to have to put up with these masts and sometimes they are going to be where you might not want them to be.

In the area where I live (a little corner of London) there are tons of mobile phone masts all over the place.  As Im sure you can imagine, there are frequent stories in the local rag about some group NIMBY's or other opposing a mast and trying to organise some kind of petition.

One incident in particular springs to mind.  It happened at one of the local Council committee meetings.  On one side there was one of these opposition groups, and on the other side a councillor who happened to be retiring and it this was to be his last committee meeting.  Anyway, after these campaigners had had their say about the secret plot to kill their kids and grandchildren with these phone masts, this councillor launched into them with one hell of a tirade and really took them down a peg or two. 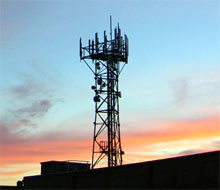 Things got really heated and it took a while before order could be restored.  However when it finally was, they took a straw poll to see who was carrying a mobile phone.  Unsurprisingly about 95% of the people in the room had one and that included most of the campaigners.

As youd expect our councillor had another go at them and ended up accusing them of being nothing but a bunch of NIBMY's and hypocrites.

I actually completely agree.  If you don't want mobile phone masts in your back yard, throw away you phone BEFORE you decide to jump on the bandwagon and campaign against them!

I agree the twats banging on about "caaaancer" are mostly selfish lunatics, that isn't the only reason people hate phone masts.

1: mobile phone signal boosters, already in place all over all cities are about 4 feet tall, a phone mast is about 30-40 feet tall, and its fuck ugly and does affect the rental prices in the area.

2. Mobile phone masts have a big trucking generator that makes noise. Fancy a black cab parked outside your window with its engine running 24/7? I doubt it.
03/09/18 bob
0

People who move next to airports and then complain about aeroplane noise, I mean, come on, they got the house cheaper because of the bloody airport. We have a person who constantly moans about the planes overhead but doesn't bat an eyelid when the local idiots scream around on their noisy motor bikes. I don't even notice the planes any more, been here 21 years.
15/05/13 Bruce
3

These NIMBY's always, but always, cite the tired old excuse that a proposed mobile phone mast will be much too near the local school and they're "worried about the unknown effects on childrens health, particularly their brains."

Well, if the zombie-brattish behaviour of the kiddies at the primary school at the end of my close is anything to go by the I'd say the possible effects of a mobile phone mast could only be a vast improvement!
29/04/13 Margs
1

Its no wonder then,that authorities bend down to serve the wishes of greenies,NIMBYs,vegans and Muslims alike,for fear of being sued! And before any NIMBYs decide to go: Oh no,there's a bloomin great phone mast outside my house:GET A LIFE!
14/11/10 DSG
2

I would just like to stress that most NIMBY's are single issue obsessives who spend far too much time thinking about the telephone masts near their houses as they do the things that really matter. it is no good being bitter about it, the masts have to go somewhere.
21/10/10 mardi gras the candyman can
-6

I can understand people not likeing telephone masts but the truth is they do have to be sited somewhere. I used to live near pilons. they have now been taken down but still I didn't complain.
21/10/10 mardi gras the candyman can
-17

Mobile phones are here, and their use requires phone masts. I wish we'd accept this reality and not give in to the nimbys who oppose the masts. The politicians and councillors who cave in are just as much of an A-hole as the nimbys.
04/01/10 Terry
-6

Mobiles can be useful in an emergency. loads of people use mobiles and if they do they should be able to cope with a mobile phone masts.However, did you no they give off a radiation which affects DNA giving an increased risk of cancer?!
30/01/09 Superman
6

Kids use mobile phones to tease others and just to show off. Thats all. They use them to say "look I have a better phone and you don't"
25/02/08 kaz
-6

No way. Not In My Back Yard. For chrissake we all managed quite well without mobile phones 20 years ago. Do we really need them today? What honestly do the kids use mobile phones for? Ganging up for a booze? Girl-hunting?
19/02/08 Nimby Pimby
2

I think that mobile phone mast should be diguised so we don't have to see them but these NIMBY's just want something to complain at. If the masts where not there they would complain that they didn't get any signal at all.
19/02/08 kaz
-11

There should be gangs of SS-style death squads that should operate undercover of darkness, removing NIMBYs from their houses in the dead of night, and torching their cars. It's because of these pockets of society, that get upset about something, and whinge and whine to the council or whoever, that SOMETHING MUST BE DONE! THINK OF THE CHILDREN!
25/05/07 Mad
-9

Parks for the kids not wacky sculptures

Car parking in Summertown for residents only